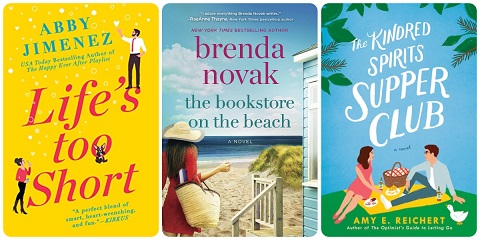 May is my birthday month, which means I’m treating myself to some new books! Which is to say, the only difference between May and any other month is that there will also be cake. Books and cake: mmm…heaven. Here are some of my favorite recent romance reads. Feel free to treat yourself to one — or more — too!

Abby Jimenez is fast becoming one of my favorite authors, and Life’s Too Short (Forever) has guaranteed her a spot on my keeper shelf.

Vanessa Price lives every day as if it is her last. The popular YouTuber carries the gene for amyotrophic lateral sclerosis (ALS), a fatal disease that has devastated her family and taken the lives of her mother, grandmother, aunt, and older sister — all before they turned 30. With a 50-percent chance of inheriting ALS, 28-year-old Vanessa uses her celebrity status to travel and raise funds for ALS research.

She has no interest in developing relationships, whether familial or romantic, because she doesn’t know how much longer she’ll live. But when her drug-addicted half-sister leaves her baby daughter, Grace, on Vanessa’s doorstep and then disappears, Vanessa is forced to take responsibility for someone other than herself.

Adrian Copeland is the sexy lawyer-next-door who finds himself pulled into Vanessa’s orbit after a 4 a.m. wake-up from baby Grace. He gamely steps in to help Vanessa with Grace and quickly falls for the fiercely independent woman — though she makes it clear she has no interest in dating. But Adrian is a good guy and quickly becomes a good friend, providing a spare set of hands and someone to vent to when Vanessa finds herself in over her head with her new parenting duties.

Vanessa and Adrian’s growing friendship gives way to romantic feelings that she can’t (and doesn’t want to) resist, but when she realizes she’s experiencing symptoms consistent with early onset ALS, she has to come to terms with her own health issues and her growing feelings for Adrian.

Jimenez crafts a brilliant, heart-wrenching story of living life on your own terms, even when that life may be cut short. Vanessa is fierce and determined, while Adrian offers a soft place to land when everything gets to be too much. I loved this thoughtful, nuanced romance about imperfect families, life’s unexpected curveballs, and the enduring power of love.

Few authors can move as seamlessly between women’s fiction and romance as perennial favorite Brenda Novak. The Bookstore on the Beach (MIRA) is the book you throw in your beach bag for a long weekend — and then gift to your best friend because you loved it so much.

Eighteen months ago, Autumn Divac’s husband, Nick, went to Ukraine on a special assignment with the FBI and never returned. Autumn has spent the last year and a half in a state of limbo, with private investigators unable to locate Nick or even to tell Autumn whether he’s alive or dead.

In an attempt to keep some normalcy in their lives, Autumn takes her teenage kids, Taylor and Caden, to her seaside hometown of Sable Beach, Virginia, to stay with her mother, Mary. Mary co-owns the quaint Beach Front Books, which gives Autumn something to do to take her mind off her troubles while being around people who love her.

But Autumn’s peace is soon disrupted when her high-school crush, Quinn Vanderbilt, returns to town after a painful divorce to be with his terminally ill mother. Autumn is still attracted to Quinn, but with her personal life so unsettled, does she dare pursue romantic feelings for a man she hasn’t seen in years? And what happens if Autumn’s long-lost husband suddenly returns?

There are several dramatic subplots that keep the pages turning, with shocking family secrets coming to light about both Autumn’s mother and daughter. As Autumn struggles to move on with her life regardless of the uncertainties of her husband’s whereabouts, her bond with Quinn only strengthens — reinforcing the attraction that lingers despite the time that has passed.

Novak does a terrific job of weaving the threads of this family saga and building a believable romance between Autumn and Quinn. The setting — a bookstore in a small seaside town — not only makes for the perfect backdrop for the story; it also makes The Bookstore on the Beach the perfect vacation read.

The Kindred Spirits Supper Club (Berkley) is the first of Amy E. Reichert’s books I’ve read, but it won’t be the last. As soon as I finished it, I snapped up the rest of her backlist. It really is that good.

After she loses yet another job, Sabrina Monroe is forced to return home to the Wisconsin Dells. It’s a charming and popular location for tourists, but Sabrina isn’t in a rush to start seeing ghosts again. (The female members of the Monroe family have the dubious honor of helping the recently departed resolve their unfinished business.)

Currently, Sabrina’s mother is doing most of the work, but now that Sabrina is back, she’s obligated to help out. It’s awkward being able to see ghosts, but Sabrina’s dearest friend is a spirit named Molly, and it’s nice to catch up. Sabrina just needs to avoid her high-school nemesis (which is hard, since Sabrina works for her), keep her anxiety under control, get back on her feet, find a new job, and move away again. No problem, right? But then she meets Ray Jasper.

Ray’s family owns a fair amount of real estate in the area, including an historic supper club that Ray has taken over for his ailing uncle. While the rest of the Jasper family is happy to stay as far away from the Dells as possible, Ray envisions building a life in the picturesque town. And from the minute he sets eyes on the very unusual Sabrina, he’s pretty sure who he wants by his side.

But Sabrina makes it clear she’s only there because she has no other choice — and she’ll be gone just as soon as she pays off some debt and finds a new job. Thankfully, Ray is up to the challenge of convincing her to stay.

Ray is a perfect match for Sabrina: He’s kind, funny, and incredibly sensitive to her moods and needs. In fact, outside of her immediate family and Molly the ghost, Ray is the only person Sabrina has ever truly felt comfortable with. The secondary characters are terrific, especially ever-optimistic Molly, who gets her own happy (if tearful) ending. With The Kindred Spirits Supper Club, Reichert has crafted a delightfully quirky, feel-good romance.