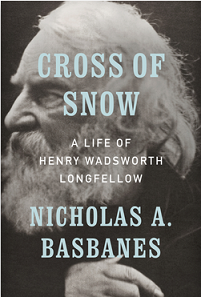 Lives of great men all remind us, We can make our lives sublime,
And, departing, leave behind us, Footprints on the sands of time;

Let us, then, be up and doing, With a heart for any fate;
Still achieving, still pursuing, Learn to labor and to wait.

In the midst of racial and political discord which now makes the United States a house divided that cannot stand, and an escalating pandemic which has killed thousands and triggered an economic depression, Americans find ourselves in the summer of 2020 as “forlorn and shipwrecked brothers,” badly in need of something (anything!) that will make us “take heart again.”

What can lift us out of this ditch? Perhaps, as the poet suggests above, by studying the “lives of great men”? Or maybe by reading the biography of just one great man?

Going with that flow, who’s the best candidate to serve as an exemplar, worthy of study, always “up and doing, with a heart for any fate” — someone who spent his life “still achieving, still pursuing,” regardless of setbacks, empowered by equanimity that gave him the emotional fortitude “to labor and to wait”?

Answer: The man whose “psalm” opened this review, as portrayed in Nicholas A. Basbanes’ “sublime” new book, Cross of Snow: A Life of Henry Wadsworth Longfellow.

Over time, respect for Longfellow’s work among literary critics has ebbed and flowed. During the second half of his life (he died in 1882 at age 75), by all accounts, he was recognized as America’s leading poet who turned out universally acclaimed bestselling books.

That level of respect carried into the 20th century until he fell out of favor with a new generation of critics who favored edginess over euphony. In recent years, widespread appreciation for his work has started to return and appears to be on a growth path.

While assessments of his place in the canon has shifted over the years like “footprints in the sand,” the word portrait of him crafted by Basbanes should cast in stone a legacy of sustained productivity and virtuous living capable of withstanding the test of time.

In his introduction, Basbanes quotes State University of New York’s English Department Chair Andrew Higgins as to why Longfellow’s life has become especially relevant in the modern era:

“The United States today is undergoing a period of reflection on what it means to be an American. Yes, Longfellow played a major role in shaping American middle-class culture in the 1800s. One side of him that’s often overlooked though, is that he had a cosmopolitan vision, and was skeptical of extreme forms of nationalism. He was seen by many as just the author of ‘Paul Revere’s Ride’ and The Song of Hiawatha, but he was also the translator of Dante, and the editor of the thirty-one volume anthology Poems of Places, which covered the whole world.”

Regarding his subject’s being worthy of consideration as a “great man” and role model, Basbanes makes a persuasive case for Longfellow as a five-tool player who met the rarely achieved goal of creating great literature while living gracefully, succeeding because he possessed the following traits:

In addition to detailing Longfellow’s productive and honorable life, Basbanes vividly depicts the dramatic love story between Henry and his second wife, Fanny, a peaks-and-valleys narrative that could provide the plotline for a passionate opera.

Still grieving a year after the loss of his first wife, Longfellow, at age 28, crossed paths and became enamored with Fanny Appleton while they were both traveling in Switzerland. When they returned to their respective homes in Boston, Longfellow moved quickly to tie the knot, but the 18-year-old object of his affection rejected his advances, satisfied by an intellectually fulfilling but platonic friendship with this older man.

Depressed by her rejection, Longfellow devised a unique wooing strategy: writing a novel of over 400 pages about their relationship, titled Hyperion because he believed “it moved on high among clouds and stars, and expressed the various aspirations of the soul of man.”

Alas, Fanny was so put off by the book that it surely delayed Henry’s closing on his desired deal for at least three years.

Once their hearts and minds finally met, however, in a single conversation that miraculously brought down Fanny’s walls, they married and spent the next 18 years blissfully collaborating in every aspect of their lives. Then, unexpectedly, tragedy struck in July 1861, when it’s believed that a burning candle dripped wax onto Fanny’s crinoline dress, and Henry could not extinguish — until it was too late — the burst of flames that engulfed his wife.

Fanny’s passing sent her husband into an emotional tailspin that included deep remorse for not having saved her from the fire. In time, Longfellow came out of it by embracing the marathon task of becoming the first American to author a complete translation of Dante’s The Divine Comedy; his three-volume final product is still recognized as among the best at staying true to the words of Italy’s most esteemed poet.

Maybe the most important life lesson subtly interwoven into Basbanes’ marvelous book is the value of reading and writing as therapy. Henry Wadsworth Longfellow made his way through life by reading thousands of books and writing constantly — in his personal journal, his voluminous correspondence, and his published works.

In an era that preceded the advent of psychiatrists, smart people in the 19th century often worked through their life issues by gaining wisdom from esteemed authors, then organizing their own thoughts, and finally putting pen to paper in a quiet room. In that environment of stillness, not surprisingly, when it came time to write, they chose words that were deep, clear, and eloquent.

This process empowered the man with the grey, flowing beard on the cover of Cross of Snow to accept the challenge he made to himself at age 31, in the first part of “A Psalm of Life,” when he said then what Americans need to hear now, as we strive to pull ourselves up out of today’s racial, political, and pandemic ditch:

Life is real! Life is earnest! And the grave is not its goal;
Dust thou art, to dust returnest, Was not spoken of the soul.

Not enjoyment, and not sorrow, Is our destined end or way;
But to act, that each tomorrow, Find us farther than today.

In the world’s broad field of battle, in the bivouac of Life,
Be not dumb, driven cattle! Be a hero in the strife!

Trust no Future, howe’er pleasant! Let the dead Past bury its dead!
Act, - act in the living Present! Heart within, and God o’erhead!

Talmage Boston is a commercial litigator and an historian in Dallas. He dedicates this essay to the memory of his late grandfather, W.A. Durham, who recited Longfellow to his grandsons in the 1960s.