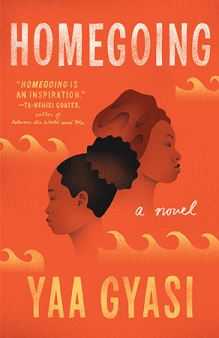 One very important thing happened between when I finished reading Homegoing, Yaa Gyasi’s radiant mosaic of a debut novel, and when I started writing this column: The United States of America held a presidential election.

Don’t worry; this isn’t going to be a column about politics — at least not directly. Instead, I’d like to focus on an aspect of Joe Biden’s win I think we can all agree is positive: Our nation will have not only its first woman, but its first woman of color as vice president. (As the son of a Kaw Native American, Charles Curtis, who served as Herbert Hoover’s veep from 1929 to 1933, holds the distinction of being the first VP of color.)

Bring on the #KHive!

Reflecting on my column prior to the election, I had been intending to write a cautionary exegesis about how the real danger of this world, the truest threat to our species, is not an existential crisis such as global warming or nuclear war — as horrifying and urgent as those might be — but rather the violence, physical and otherwise, that we perpetrate against one another.

Like many, I was limping along after a summer of necessary protest over the deaths of countless unarmed Black men and women at the hands of police officers; a summer that, coupled with rising coronavirus cases and the fever pitch of electoral chicanery, had evoked in me a sense of hopelessness the extent of which startled and unsettled me.

Human malfeasance would have been a fitting frame for Gyasi’s tapestry of a story, which chronicles the lives of generations of Africans and African Americans with all their attendant traumas and triumphs — but I think the celebration of Black women is an even better one.

The two sisters from whom Gyasi’s narratives unspool, Effia and Esi, are each pillars of strength in their own ways, but the generations they beget seem each more impressive in their ability to endure. That phrase in itself — their ability to endure — should illuminate why my first instinct about this column and book was relatively dark.

While no one can deny the myriad accomplishments of the African diaspora, neither can one overlook the multifaceted and ongoing persecution it has faced. This is reflected in the language we use to describe Black men and especially Black women. Too often, we speak of how much they have weathered, how strong and determined and full of grit they are. Perhaps it might be healing, might be worthwhile and rewarding, to try lauding Black women’s accomplishments rather than focusing solely on what the world has required them to overcome.

It is not only Harris’ political acumen, however, that we celebrate upon her ascendancy to the highest role a woman has thus far filled in American government. In fact, one of the most important things about her has nothing to do with her politics, but rather with her ability to transcend them. Often, politicians grow to be defined by their views on lightning-rod issues — or, perhaps worse, by their lack of consistent views.

Not so Senator Harris.

One of the images, or many iterations of an image, that I will most clearly remember from the 2020 presidential campaign is Kamala Harris, daughter of biomedical scientist Shyamala and “Momala” to stepkids Cole and Ella Emhoff, standing casually in a small-town parking lot in her suit and Converse shoes and exhorting listeners to vote despite — or perhaps because of — the struggles this year has brought.

It’s not a photo I suspect would be appreciated much by those who measure success according to (purported) crowd size. There’s nothing inherently glamorous about Harris; she looks like any everyday American holding forth on a topic she’s passionate about.

And that’s exactly the point. Harris, for all her accolades, is entirely at ease being herself: a person who cares about democracy and who, while as fallible as the rest of us, tries hard to do the right thing. Many people may disagree with her vision of what the “right thing” is, but after spending the past four years mired at the intersection of incompetency, malice, and chaos, having someone — in fact, many people — with a moral compass and a strong sense of self as part of the incoming team is a deep relief.

These past few months have been challenging ones for our country, no matter where you fall on the political spectrum. Like Gyasi’s two sisters, it seems the Democrats and Republicans have diverged so distinctly that one wonders whether they will ever come together again. Read Homegoing to discover what legacies Effia and Esi leave — and follow the news to learn the same about our elected leaders.

A recent memoir about hardship and hope proved the perfect antidote to 2020.