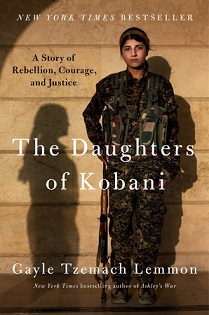 I’ve been thinking a lot lately about perspective. It influences so many aspects of our lives — what we feel is important, why we do what we do, how we relate to others and the world — and yet remains an almost automatic part of our internal processing, something we generally don’t spend much time reflecting on. A new book by Gayle Tzemach Lemmon, The Daughters of Kobani: A Story of Rebellion, Courage, and Justice, reminded me of the ways in which perspective can play tricks on us, making us feel both close to and far away from others.

In the book, Lemmon writes with clarity about the complicated geopolitics surrounding the Kurdish population of Syria, which has faced threats both in President Bashar al-Assad (seeking to reassert his control over Kurdish-controlled areas) and in ISIS, the terrorist organization seeking to establish a caliphate and expand its reach. When ISIS began to encroach on Kurdish towns in northern Syria, the Kurds formed the People’s Protection Units (YPG) with the intention of defending their territory.

As Kurdish men flocked to the YPG, their female counterparts expressed an equally fierce desire to protect their homeland by taking up arms, despite often facing initial strong opposition from their families. One woman’s uncle is so conservative and devout, he forbade her and her cousin from playing soccer as children.

“It is not for girls to play this sport. That is shameful,” he tells them. “You’re wrong; football is for everyone,” she shoots back.

From the start, the female fighters were not interested in being relegated to supporting roles, insisting instead on coed training that allowed them to learn critical tactical skills such as how to shoot a weapon, perform basic first aid, and outmaneuver a force larger than their own. Those chosen to lead the newly formed Women’s Protection Units, or YPJ, became some of the most respected commanders in the entire militia.

In battle after battle for the Kurdish villages in northern Syria, they faced death daily and were forced to think on their feet and react with lightning swiftness to car bombs, snipers, and other lethal assaults. On shared walkie-talkie frequencies, ISIS fighters threatened to rape and kill the women as their families watched.

The women fought on.

As I read about the seemingly insurmountable challenges the YPJ battled during each fight, I was awed — and intimidated — by the women’s bravery, self-assurance, and resourcefulness. The book was published recently and references events taking place largely within the last decade, yet amid the isolation and division of the last year and a half, the narrative of common goals and friendships forged in fire felt worlds away.

During one particularly harrowing conflict, a commander who “hadn’t eaten more than bread in close to forty hours and had barely slept in days” (“When you feel like at any moment a bullet might travel right to your front line, it’s impossible to sleep. We’ll sleep when the fight is over,” she explains) engineers a daring rescue of 21 compatriots trapped by ISIS in an abandoned building.

The extraction involves weathering a hail of bullets, shooting mortars at an invisible target, and organizing some serious emergency U.S. air support, all made worthwhile when the commander sees “the huge smile of [her comrade] as he ran toward her, full of joy” after she liberates him.

Just as I was experiencing ever-greater despair at my current personal situation, far as it felt from any shared sense of purpose or community, my perspective shifted. It was a seemingly unremarkable incident — a walk with a friend, a comforting hand on my arm when I was at my lowest, a simply stated “I hear you” — but it changed everything.

My friend reminded me that happiness is so much more than our circumstances; it also comprises what we make of them. This is not to diminish the danger of warfare or the anguish of mental-health concerns or to suggest that anyone can just will their way out of a difficult situation.

Rather, it is meant as empowerment: We may never have control of the events around us, but we do have some measure of dominion over our reactions to them. If we can focus on reacting in productive ways (always acknowledging that “productivity” means different things to different people), it seems likely our chances at happiness will also increase.

Not all the stories of the YPJ end happily; the women endure injuries and worse in the course of their clashes. But there are obvious victories — both on the battlefield, such as when the women take a key village or neighborhood, and off, as when the uncle of the soccer-playing fighter begins to seek her out for advice rather than admonish her for taking part in a man’s activity. And now, rather than feeling isolated from these role models, I think, If they can take control of their futures, why can’t I?