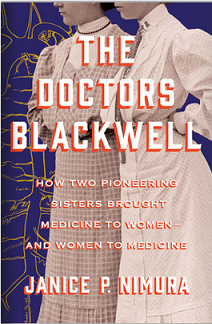 Janice P. Nimura’s The Doctors Blackwell: How Two Pioneering Sisters Brought Medicine to Women — and Women to Medicine seemed like a relevant reminder of the importance of healthcare workers and scientifically backed medical treatments when I chose it as my inspiration for this month’s column. Indeed, those messages are evident and emphasized in the book, but perhaps not in the way I’d expected.

Rather than being impressed by the surgical acumen and trailblazing spirits of Emily and Elizabeth Blackwell, I found myself grateful not to have ever been placed in their care, certain I would not have survived their experimental techniques and barbaric-seeming methods!

Of course, this was not the sisters’ fault. In many ways — including where hospital sanitation and surgical care were concerned — they were remarkably progressive for their time, insisting on standards of hygiene not widely shared in the mid-to-late 1800s. Yet as I followed the Blackwells along their separate but intertwined medical journeys, witnessing accidental atrocities committed in the name of science (and bearing in mind that, although both ether and chloroform had been used as anesthetics by the time the sisters began practicing, they were not the norm), I considered shifting the column’s focus away from healthcare workers and instead writing a paean to the scientific progress that has taken place in the last century and a half.

The coronavirus, I reflected, would have looked significantly different without it.

But for everything the Blackwells’ story conveyed about the state of the medical field in 19th-century Europe and the United States, it was the glimpses into the sisters’ personal lives and inner thoughts that made the greatest impact on me.

Emily and Elizabeth might have been brilliant and perspicacious, each able to hold her own against contemporaneous male counterparts, but sympathetic they were not. Both struggled to make their way in the world not just because they were women in a man’s field, but because they lacked the ability to relate to people around them regardless of gender.

Seeing this confirmed over and over across the sisters’ lives again brought home to me the importance of healthcare workers. Through their studies and sheer boldness — not to mention, in Elizabeth’s case, a doggedness that veered into autocratic boundary-crossing (so much so that her brother’s fiancée felt the need to warn him not to forward their correspondence to his sister) — the Drs. Blackwell were able to help people, yes. But it was always from a detached, carefully calculated distance, one that frequently incorporated hints (or outright expressions) of disdain, impatience, and frustration.

By contrast, in the last year, we have seen myriad instances of nurses, doctors, therapists, emergency-room technicians, public-health officials, and other medical professionals getting up close and personal with their patients — and at the very moment when covid-19 made doing so exceedingly dangerous for them.

No one could blame these valiant men and women for being concerned about the ramifications of working nonstop with highly infectious individuals, yet we consistently witnessed them going above and beyond: A nurse in Indiana who developed educational tools for managing children with behavioral challenges as well as self-care guides for parents, underserved communities, and frontline healthcare workers; a Super Bowl LIV champion with a medical degree who chose to sit out the 2020 NFL season in order to help combat covid-19 at a long-term-care facility in his native Canada; and a physician (and self-designated “covid hunter”) who has been fighting the coronavirus since March 2020 without a single day off.

Having celebrated these sacrifices, however, I want to be clear about one thing: Truly respecting and honoring these people means doing everything possible to ensure they do not become perpetual martyrs, sacrifices on the altar of personal freedom. We must listen to medical experts, take the precautions they advise, and continue to find new ways to ride this worldwide pandemic wave that seems to be simultaneously crashing daily and never fully crashing at all.

Personally, I dream of eating brunch with friends in a lively restaurant, running in a 5K, and visiting family again — nothing life-changing, just simple pleasures I once took for granted. And we’re getting there: President Biden’s promise of 100 million covid-19 shots in Americans’ arms in his first 100 days is well on its way to becoming reality, with the White House reporting a March 6th record of 2.9 million doses administered in one day. We can see the light at the end of the tunnel; it’s just a question of believing we can get there.

When that light seems to dim, or when the air in the tunnel around me starts to feel thick, I look to both the Drs. Blackwell and modern healthcare workers for inspiration. Emily and Elizabeth believed they could do anything they set their minds to — an attitude that served them well when they sought access to domains theretofore exclusively male. Perhaps that mindset can likewise help me in a different, but no less unprecedented, situation.

Today’s medical professionals have beliefs of a different kind — in vaccines, in prevention techniques, in the scientific method. When my hope in the system fails, I’ll put my trust in them and follow in their footsteps. They’ll lead me out of the tunnel.

How the Anthropocene Age is affecting the ecology around us.