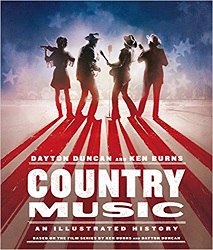 September 15th is the release date for the new Ken Burns’ documentary, “Country Music,” on PBS, containing eight episodes spanning 16 hours. A bonus accompanying each Burns epic is the companion coffee-table book that provides a narrative of the film’s subject along with its most memorable photographs.

Dayton Duncan authored the companion books and served as writer and co-producer of Burns’ prior features “Lewis & Clark,” “Mark Twain,” “Horatio’s Drive,” “The National Parks,” and “The Dust Bowl,” and now brings his storytelling horsepower to “Country Music.”

Those who peruse Duncan’s Country Music: An Illustrated History will likely have the same affection for its 500-plus pages as they will for the documentary. Though what Hank Williams, Johnny Cash, George Jones, Loretta Lynn, and Dolly Parton looked like in their prime is embedded in every country fan’s memory, the book also has eye-popping photos of them as children, along with pictures showing them and other star performers out of their element. These include Gene Autry as a World War II cargo plane pilot, Merle Haggard as a San Quentin prisoner, Kris Kristofferson as a clean-cut college athlete, Tammy Wynette as a hairdresser, Charley Pride as a Negro League pitcher, and Reba McEntire as a barrel-racing cowgirl.

The book’s endearing images are matched by its tight text, which details country music’s emergence, from Jimmie Rodgers and the Carter Family in the 1920s through Garth Brooks’ powerhouse stardom in the 1990s. Duncan seamlessly weaves together the stories of the top performers, their most memorable songs, and the evolution of the industry into a surging flow for the reader that picks up speed with each chapter, exploring how the genre transformed over the decades from hillbilly to bluegrass to Western swing to the Nashville Sound to rockabilly to Bakersfield to country rock to outlaw to Countrypolitan.

Since its inception, interwoven into this musical mosaic has always been the influence of gospel and blues, meaning country music has never been just one style. As Rosanne Cash put it, “We contain multitudes.”

The essence of human drama is tension. For almost a century, country music has had more than its share of drama due to two things. First is the contrast between what outgoing, God-fearing people do for fun on Saturday night vs. what they do on Sunday morning, when it’s time for penance. Somewhere toward the end of this 18-hour rollercoaster, the “never ending search for redemption” kicks in.

As examples of this tension, Hank Williams pushed himself well past the envelope with his excessive intake of alcohol, amphetamines, and promiscuous sex while still believing he wrote his songs (like “I Saw the Light”) by channeling God’s direction. A decade later, as Johnny Cash’s life spiraled out of control, he insisted on keeping a promise he made to his mother at the start of his career: that he would sing a gospel song at every concert.

The second major tension has been the clash between the pursuit of art vs. the desire to make money. In his preface to the book, Ken Burns describes the conflict as a product of “the businessman’s desire to clone, which is the enemy of creativity.” Along that same line, veteran songwriter Guy Clark told young Rodney Crowell, “You’re a talented guy. You can be a star or you can be an artist. They’re both worthwhile pursuits. Pick one.”

Townes Van Zandt chose to be a poet-songwriter artist. Demons then drove his psyche into darkness where booze, heroin, and manic depression messed up his mind and body, and his life ended early at age 52. None of his albums made money because, as he once told a reporter, “Nashville is not geared for minor keys.”

Major stars nonetheless believed his songs were worth recording. Willie Nelson and Merle Haggard gave their voices to “Pancho and Lefty,” and it sold over a million records. Duncan connects the dots on the song’s odyssey from its beginning until it topped the charts:

“To get there, the song had traveled a long, meandering road. Two of country music’s legendary songwriters — the musical ‘outlaw’ from Texas [Nelson] and ‘the Poet of the Common Man’ from the hardscrabble streets of Bakersfield [Haggard] — had listened to an album recorded by a former hippie folksinger [Emmylou Harris], who had been converted to country by a cosmic cowboy [Gram Parsons], and in doing so stumbled upon a song written by an eccentric vagabond [Van Zandt], who spent his days trying to write the perfect song, and some of his nights crashing with friends, at a home [Guy Clark’s] where the focus was on art, not commercial success.”

In the midst of these Saturday/Sunday-art/business tensions is a singular fact: At its core, country music has always been about a search for truth by flawed beings who deal with major life battles, many of their own making. Songwriter Harlan Howard described it as “three chords and the truth.” Marty Stuart believes “Country music is about truthfulness, even when it’s a big fat lie.”

Loretta Lynn put it this way: “If you write the truth, that’s all a good song is.” So she wrote dozens of hits about the truth in her volatile marriage, with titles like “Don’t Come Home a Drinkin’ (with Lovin’ on Your Mind),” “Two Mules Pull this Wagon,” and “The Pill.”

Like Ms. Lynn’s perspective, when asked what made his songs so powerful, Hank Williams gave a one-word reply: “Sincerity.” With that as their foundation, the lyrics and emotion conveyed by “the Hillbilly Shakespeare” hit home to the multitudes whenever he sang “The Lovesick Blues,” “I’m So Lonesome I Could Cry,” “Cold, Cold Heart,” “I Can’t Help It If I’m Still in Love With You,” and “Your Cheatin’ Heart.”

Above all, Duncan’s book is the story of hard-living, ambitious, and highly entertaining people in search of the elusive brass ring most of them grasped for at least a while. To catch the ring typically involves a measure of luck, though, as Seneca noted, “Luck is what happens when preparation meets opportunity.”

The history of country music confirms Seneca’s wisdom. Performers who have achieved some success acknowledge that luck played a part in their rise to the top, though they know it arrived only after they had spent years refining their craft through dogged perseverance.

Fiddler/bandleader Bob Wills wrote his hit “San Antonio Rose” as a tweak off his earlier song “Spanish Two Step.” When his publisher, the Irving Berlin Music Company, told him it would be a bigger hit if he added lyrics and had it sung — and even offered him proposed lyrics — Wills rejected Berlin’s verses and “gave one of his horn players a jug of whiskey and five dollars to come up with something new.” The result was “New San Antonio Rose,” which Bing Crosby made into a million-record bestseller. Wills said the song took him “from hamburger to steak.”

Bobby Braddock and Curly Putnam wrote “He Stopped Loving Her Today,” offered it to a down-and-out George Jones, and “a 40-year career was saved by a three-minute song.”

Dolly Parton knew she had to disconnect from Porter Wagoner to reach her dreams but didn’t know how to escape his control. So she communicated her final decision in a way he couldn’t resist — by writing and singing to him, “I Will Always Love You.”

These are the stories of America. Dayton Duncan delivers them in this irresistible book that no self-respecting country music lover will be able to put down. And he puts them into their proper place in this spellbinding history narrative, one song at a time.

Talmage Boston is an historian and lawyer in Dallas who’s a Founders Board member of the Better Angels Society, a nonprofit organization dedicated to educating Americans about their history through documentary film. The society provides financial support to both Ken Burns and Dayton Duncan.