The countless rewards of heading the Washington Writers Conference 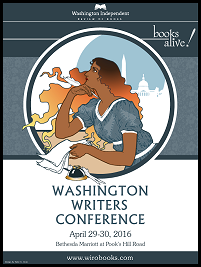 Just as a solid rock
Is unmoved by the wind,
So are the wise unmoved
By praise or blame


I started working on the Washington Writers Conference because David Stewart said that the Washington Independent Review of Books wanted the conference for fundraising and marketing. I wanted to help the Independent, but my personal concern was to demystify literary agents for myself, so I volunteered for the first conference committee. My job would be to obtain the agents for seven-minute pitch sessions at the first conference. I became Agent Guy.

That was a good choice for me because I came into regular contact with Deborah Gelin and Gene Meyer, who were the masterminds behind the first two conferences. I was like an adolescent to their professionals, but I contributed, and each conference has been more successful than the last.

When they asked me to take over the committee chair for the third conference, it seemed natural. Deborah and Gene were still closely involved, and if we were going to institutionalize the processes of the conference, then we needed to begin rotating new people in.

Deborah and Gene are fine microcosmic examples of the Washington literary scene. They are both members of the Independent’s board. Gene was on the staff at the Washington Post during the glory years and he knows everybody. He’s known them for 35 years. He’s also written books, including Chesapeake Country.

Deborah has a built-in bullshit detector. She made the first conference happen out of sheer will. I had no idea what I was doing, except calling agents, pitching another conference for them to attend, and chatting up the abundance of competent writers in DC. Deborah brought it all together. And the agents realized it right away.

So, while some people might look down their noses or call any conference a rip-off, I know from the inside that ours unleashes a great deal of positive activity. Social and professional networks are strengthened. No matter what level you are at as a writer, the Washington Writers Conference is the right balance of macro-industry talk and micro-brass-tacks conversation. Between the brilliant local and national panelists at each event, and the agents sitting for five-minute pitches (seven was too long), and the camaraderie in the hallways between, it’s a day of stimulation and excitement.

The vibe is so good that each year has brought new people to volunteer for our nonprofit, non-paying work. Tara Campbell took over as Agent-Pitch Coordinator when I became chair. Our marketing team now includes tireless and savvy pros Caroline Bock and Jill Bernstein. Several Independent staffers, Holly Smith and Barb Howe among them, have been instrumental in our efforts. And with Jenny Yacovissi and Audrey Bastian, we have the staff in place to continue a new round of expanding and professionalizing the conference next year. And we have every expectation that others will join us after this year’s conference.

This year, registration has already passed beyond our conservative estimations, drawing more participants than ever, with nearly two weeks to go! That’s in part because we’ve made some quid-pro-quo arrangements with the Writer’s Center in Bethesda, and Politics and Prose in DC. No question it helps to be on the mailing lists of such powerhouses.

But they wouldn’t reciprocate unless the Independent and the conference were already established institutions in the DC literary community. We’re grateful for their support, but we expect to keep carrying our weight, cultivating connections, and providing opportunities for the dedicated writers out there who are looking for ways to move forward in their work.

I’m happy that I became involved. It’s been a great experience. It’s not always a cakewalk, but I’ve not been too stressed about it. The conference has an energy of its own. We on the committee just guide it, much like a gigantic Ouija needle. There can be no blame in something so positive. And there can be no praise that isn’t turned toward all the others involved.

And just so that you know, if you go to this year’s conference, look for me in the pitch room. I’m trying to sell a thriller about Chinese spies in U.S. institutions of higher education. I’m gonna get rich quick!