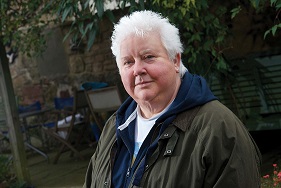 The oft-labeled “Queen of Crime” has multiple international bestsellers under her belt. Yet novelist Val McDermid hardly rests on her laurels. Instead, she systematically tops herself with what seems to be a limitless supply of riveting plots and ever-more-complex characters.

Her most recent novel, Insidious Intent, which debuts today in the U.S., is the 10th installment in McDermid’s Carol Jordan and Tony Hill series, which features a detective (Jordan) and a clinical psychologist (Hill) who team up to solve violent crimes. What makes these particular books so appealing is the bond that develops between Jordan and Hill, who are both, in a way, victims of their own dark pasts.

You’ve always been adamant about defending libraries and declaring how relevant they still are. What do you think of people who say taxpayer money shouldn’t be spent on them?

They’re probably fortunate enough never to have needed what libraries provide, and they haven’t the imagination or the understanding to grasp the value of what libraries offer. I grew up in a blue-collar family where there wasn’t money to spare for books. Should I have been deprived of access to reading and condemned to limited life opportunities? Libraries don’t just make writers — they make architects and doctors and lawyers and nurses and entrepreneurs. They raise the shutters and let us see the world outside our own circumscribed existence. I don’t know whether it’s the same in America, but in the U.K., the library is also a social hub. Book groups, board-game clubs, mother-and-toddler sessions. And, of course, access to the Internet for those who can’t afford it but need it. To say taxpayers’ money shouldn’t be spent on libraries is one step away from shutting down the public schools.

You began your career as a journalist. Would you say that traditional journalism as a trade is in danger of disappearing?

That’s what I hear from all my friends who are still in the game. Circulation is dropping dramatically, the advertising that used to sustain local papers is migrating to the Internet, and everybody thinks they’re a citizen-journalist. It worries me, because although the media is far from perfect, there are no checks and balances on the unmediated tsunami of “news” out there. The “fake news” is not what comes from the overwhelming majority of reputable news organizations — it’s the other stuff.

A Huffington Post headline once included you in an article about LGBT writers, but to most people, you’re Val McDermid the crime writer. How would you define your writing?

I don’t. I just write what I want to write. The stories clamoring in my head and my heart. Mostly that’s been crime fiction, but not exclusively. I am a lesbian and that has some influence on my perspective. But equally importantly, I’m also Scottish, I’m a mother, I’m a feminist, I’m half of a couple, I’m a singer, a reader, a news junkie, and a football fan. All of this and more informs my work. I honestly think labels and categories have become much more blurred in recent years, so I don’t see much point in them.

Previously you have mentioned that one of your characters, Lindsay Gordon, has some of your own personal traits. Will she be back anytime soon?

She has some of the superficial details of my own experience, but I’m not sure how alike we are in terms of our personalities. She hasn’t spoken to me for a long time, and let’s not forget she’s in her 60s now, so she’s not the hot-headed youngster she was back then! But I never say never…

Insidious Intent is the 10th in a series that began in 1995. How challenging is it to come up with new storylines for Tony and Carol?

I’ve been fortunate. Every time I’ve approached the end of a Tony and Carol novel, I’ve felt the stirrings of a new idea for them. And so it is this time. I’ve never struggled for ideas. The struggle sometimes is to get them to shut up!

These two characters have certainly been through hell and back together, but many times they’re their own worst enemies. What keeps them stumbling back into patterns of self-destruction?

They’re both damaged, but they’ve both also taken huge steps forward in terms of their understanding of themselves and of others. And certainly nobody knows either of them as well as the other does. I think they’re both fundamentally afraid of giving the ultimate power to anyone else. Even someone they trust. So they’ll always find a way to throw stones in the road.

Did you have the ending of Insidious Intent already in mind when you started writing the novel?

Yes, I knew where I was going with it right from the start. I wasn’t sure quite how I was going to get there ‘til close to the end, but I knew what needed to happen. That’s generally how it works for me — I know what I’m heading towards, I know some of the key turning points along the way, but a lot of it is stumbling forward trusting myself…

Now that this novel is finished, is there a new project in the works?

Next year’s book will feature my Scottish cold case detective Karen Pirie. I’ve also got some non-crime project under way. I’m writing a one-act theater play and working with an artist on a graphic-novel adaptation of “Resistance,” a radio drama series I wrote for the BBC this year. And I’ve written the words for “Message from the Skies” — take a look at it here.