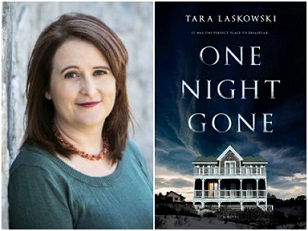 There isn’t a short-story writer who hasn’t heard of Tara Laskowski. As the editor of SmokeLong Quarterly for 10 years, she was responsible for publishing some of the most remarkable contemporary flash fiction found online. She published two critically acclaimed story collections of her own — Bystanders and Modern Manners for Your Inner Demons — that defied genre with their approach to horror and suspense, and she recently released her debut novel, One Night Gone.

Congratulations on One Night Gone! Tell us everything we need to know about this book in one deep breath.

One Night Gone is essentially a cold-case mystery. Allison Simpson, who is in her early 40s, arrives in the wealthy beach town of Opal Beach on the Jersey Shore during the off season to house-sit for a few months after a messy divorce. She’s lost her job and her house and her husband and she’s at sea, so this seems like the perfect opportunity to regroup and figure out her next steps. But while she’s there, she hears about a teenage girl [Maureen] who went missing from Opal Beach 30 years before. She’s upset by this because she feels like no one really cares about what happened to the girl. So she starts to investigate on her own.

The story is told from two points of view and two different time periods, so you get to see Opal Beach in the present day in the off season, and again in the 1980s during the height of summer. It was fun to write a place from so many different angles.

I’m one of those annoying people who searches for the author in every main character. So…where are you in Maureen?

So, I think I’m one of those people who writes characters that I WISH I were like. I was the opposite of a rebellious teen — I always got good grades, listened to authority, never got in trouble — and so I think one of the reasons I had so much fun writing Maureen is because she’s so much not like me. I guess I live vicariously through my characters. I love how Maureen pushes boundaries, how she’s unafraid to say what she’s thinking, how ultimately optimistic she is even though life deals her some pretty shitty cards. Maureen has a tough exterior but she’s super vulnerable on the inside, and I think that’s why I love her so much.

Having read both One Night Gone and your short stories, I love how you dive into unsettling, unnerving subjects. It’s like you have a direct line to what we don’t even admit to ourselves. What draws you to examine the underbelly like that?

I’ve always been fascinated by the weirdness in people, by the shadows, by the ways in which so many of us follow these “rules” of civility and niceness on the outside but can think such evil thoughts on the inside. My short-story collection Modern Manners For Your Inner Demons is what I like to call “tales of dark etiquette.” They are short stories told in the style of an etiquette guide, like something you’d find in an advice column or an Emily Post book. You know, like the rules of how to set a table or how to behave at a wedding. But I thought it would be really interesting to turn that on its head and write etiquette guides for the darker side of human nature.

The stories were super fun to write because people are most interesting when they are acting badly. That said, I actually have a very hard time making bad things happen to my characters. So when I switched to writing novels, I really had to force myself to make bad things happen to these people that I care about. I was spending so much more time with them than I would for a short story, and I grew to care about them in a different way. This makes it harder for me to put them in terrible situations. I’m working on it, but it’s still not something that comes natural to me. It’s so hard!

Do you consider your work horror or suspense?

So, horror is my first love, as far as consuming it. I really enjoy a good horror book or movie, but I don’t write it as much. I think this is partly because, as I said above, I hate making bad things happen to my characters, and in horror, you really can’t avoid doing that and be any good at it. I like to be more subtle with my terror, which is why I’d say I’m more of a suspense writer.

What is the biggest difference between writing a novel and shorter pieces?

I write a lot of flash fiction, and that is my favorite medium. I love hyper-focusing on a small moment and teasing that out to make it an epiphany. We think that the biggest moments in our lives are huge things, like death and divorce and getting married and having children, but often some of the most impactful things that shape us are the small, nearly invisible moments, and that’s what I love exploring in flash fiction.

I had to really train myself to write a novel. It is an entirely different beast. I had to learn to let go of the control freak in me that wanted to be able to hold on to all of the pieces of the story at once. When I realized I didn’t need to keep it all in my head, that I didn’t need to KNOW EVERYTHING all at once, the process got easier. Slightly easier. The tiniest bit easier. Okay, it is still really goddamn hard.

You edit for a living and also spent years editing one of the best online literary journals, SmokeLong Quarterly. How does being an editor change your own writing and editing?

Reading other people’s work always makes you a better writer. And I think editing their work also makes you a better writer. Editing a piece was one of my favorite duties at SLQ. I liked coming across a story that wasn’t quite working, but I could see how it might be fixed. There are many stories you read that you know aren’t working, but you can’t necessarily articulate why, or feel like you could help the writer make it work. But when I do find a story that I can “see” in that way, it’s immensely satisfying to work with a writer on it. There’s nothing more thrilling than hearing someone express joy about an editing suggestion you make.

Of course, all of this is so subjective, so I may think a story isn’t working when another editor thinks it’s the bee’s knees. That’s the weirdness of this whole business, honestly. So the best parts are when you connect with another writer or editor who “gets” your work and what you are trying to do and can help you hone your craft. That’s what I aimed to be for people when I was editor at SmokeLong. It didn’t always work, and sure, a lot of times, I was probably wrong, but when it did work, it was magic.

Who are some of your favorite horror/suspense authors?

Oh, gosh, the list is so long! But I will tell you two writers publishing today who I adore as people and as writers. For mystery/suspense, everyone needs to buy and read everything that Carol Goodman publishes. And in the horror genre, I’m a big fat fan of Paul Tremblay.

What’s next for you as a writer?

Hold me. I’m currently working on my second novel, a standalone suspense about two moms and former friends who find their worlds colliding when a teenage girl goes missing during a suburban block party. So I guess you can say I’m exploring the underbelly of suburban life, which, I tell you, has a lot of icky stuff crawling around down there.

An Interview with Elaine V. Beilin