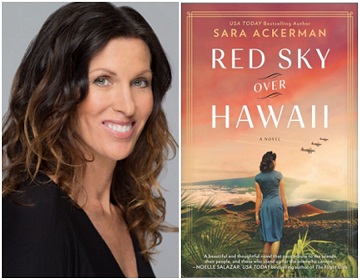 There’s more than Pearl Harbor to Hawaii’s experiences of World War II, and novelist Sara Ackerman’s third historical novel set in the islands, Red Sky over Hawaii, transports readers to the adventure — and romance — of a young woman on the Big Island. This lush story offers both a delightful escape and a window on the hardships that Hawaiians of different races and nationalities faced.

This is your third book about Hawaii and World War II. What about that combination calls to you?

Hawaii is my home, and I have a deep and abounding love for these islands. I was born and raised here and grew up on my grandparents’ stories of life during the war — from picking up hitchhiking Marines with their lion, Roscoe, to nearly getting shot for being on the street at night, to housing homesick soldiers on weekends. Hawaii is the only state where war was literally on our doorstep. Many people view Hawaii purely as a sunny vacation spot, but we are so much more than beaches and coconut trees. As for World War II, it just happened that way. After Island of Sweet Pies and Soldiers, my publisher kept asking for more and, fortunately, I had more ideas. Now, I’m almost done writing book four about the Women’s Air Raid Defense, and there will be a fifth!

We meet your main character, Lana, when she is struggling to make sense of her pained relationship with her father and reeling from the realization that her marriage is broken. As the book progresses, the family she thought she had gives way to one she has found. How does Lana feel, at first, about her newfound family? And why is found family important in our lives?

I think, at first, everything is happening so fast, it’s all about survival. Then Lana begins to question herself and if she’s up for the task. She is the central figure holding these people together, but what starts off as a sense of duty soon changes into a deep caring for the others there with her — three of which are youngsters. I’ve always been fascinated by the bonds that form between people in times of war or hardship, and how people band together. I love reading about families taking in others or of unlikely friendships developing between old people and kids, or even those about animals taking in other species and raising them as their own. I feel like they tap into an unconscious need for connection. We all just want to be loved.

Yes! And Lana loves animals, even if she isn't sure how to make space for them in her life. I love this line, where she thinks, upon seeing a horse, "Something about the warm and big presence of the animal pried open her heart." Why did you include animals in the story?

I include animals in all of my books — dogs, cats, donkeys, sea turtles, a featherless chicken, endangered Hawaiian crows, horses, and even a lion. I love animals and I can’t imagine my life without them, or writing books without them. Not only do animals have so much to give us and teach us, they can also reveal much about the characters in a novel, making them seem more human and more relatable.

The novel addresses the dark history of detainment camps in the United States during World War II. What happened in Hawaii?

Hawaii was unique in that over a third of our population in 1941 was of Japanese ancestry, so though many of the leaders were taken to detainment camps, the government couldn’t lock up all the Japanese because they were essential to our economy. While researching, I’ve come across some surprising suggestions made on how to handle this. One was to round up all Japanese aliens and send them to a camp on Molokai. And not only were there Japanese, but also German and Italian prisoners. I was inspired to write this novel partly based on a story of a German family separated when the parents were taken away to a camp and the two young daughters were left at home to fend for themselves. It was over a year before the parents were released.

The book both begins and ends with a testament to love and magic. Why is magic important to Lana?

I love magical realism, and if you’ve ever been to [Volcanoes National Park], you know it is quite an enchanting place with a powerful energy. I enjoyed the exploration of the “unexplained phenomena” throughout the book, and also believe we as humans have a deep well of untapped intuition and abilities. I wanted to touch upon that here, just lightly.

I haven’t been to Volcano, but after reading about it, I’d love to. The volcano looms over the novel, and the descriptions of the land and towns on the volcano's flanks are so vivid. What kind of research did you have to do to develop such a lush world for your characters?

For me, setting is a huge part of the story. And this book was fun to write because Volcanoes National Park is one of my favorite places in the world. There is a vast and unearthly beauty there, with a rainforest and ecosystem unique to the Hawaiian Islands. Not to mention an active volcano! I have been going there since I was young and have spent a lot of time exploring every single trail in the park, from Mauna Loa Road to Halema’uma’u (Kilauea’s main crater), all the way down Chain of Craters Road to the coast, where the lava flows out to the sea. I know it like the back of my hand.

In my book, I wanted to give the reader the same feeling I get when I’m there, and the sights and sounds and smells, whether it be the crunch of lava underfoot, the whirring of the wings of the honeycreepers (tiny forest birds), or the scent of the sulfur that permeates the air. Volcano has been closed during the pandemic, and I miss it. I can’t wait to return!

Carrie Callaghan is the author of the historical novels Salt the Snow (2020) and A Light of Her Own (2018), both from Amberjack/CRP. She lives in Maryland with her family.