An Interview with Michael Landweber

The writer/editor talks sci-fi, audiobooks, and the importance of the human element in every story. 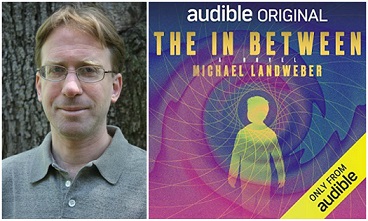 Author Michael Landweber, an associate editor at Potomac Review, already has two traditional books — Thursday, 1:17 p.m. and We — under his belt. His latest release, though, is different. Although The In Between is also a novel, it exists solely as an Audible Original. Here, Landweber talks about the unusual venture and reveals how his own attitude toward audiobooks has changed because of it.

The In Between is unique in that it exists only as an Audible Original. How did the project come about, especially given that your two previous novels are on paper?

When I wrote the book, I did not know where it would end up, so the writing process was no different than my usual approach (which is a bit haphazard, occasionally tinged with desperation). So the novel was not specifically conceived as an audiobook. The acquisition and editorial process for the Audible Original was also largely similar to my previous print books. So the project came about in a very traditional publishing way. It was only when it came time to let people know it was available that I had to start a lot of conversations with, "You can't read my book, but you can listen to it."

There’s long been a sentiment among some literary types that audiobooks don’t “count” as reading. What’s your take on the issue, and has your perspective changed since writing The In Between?

I do love paper, so I suppose I've been guilty of this sentiment. But putting out The In Between has made me a convert (and the amazing folks at Audible had a lot to do with that). What is interesting about an audiobook (as opposed to an adaptation for film or TV) is that it is the identical work in a different medium. There has not been another writer reinterpreting it. Even though they are spoken instead of read, the words are all mine.

But it is fascinating and exhilarating to hear the narrators perform the novel. I was lucky enough to have two extremely talented narrators, Brittany Pressley and Mark Boyett. Listening to them allowed me to get a whole new perspective on my own book. Also, as I now write new stuff, I find myself spending more time thinking about how a narrator would read it, which has made me a more deliberate and careful writer.

Although teleportation and other high-tech elements figure prominently in your novel, it’s still, at its core, about a missing child and his parents’ struggle to deal with loss. Do you think sci-fi stories need a human center in order to resonate with readers?

I don't think that any novel — genre or literary — can be successful without the human element. It is true that sci-fi does ground itself in technologies like space travel and teleportation, but the most successful works in the genre invest you in the human beings that are affected by it. Without strong characters, I believe that the book can't succeed. The reader needs that emotional connection to be engaged in any story.

Who are some of your favorite authors — sci-fi/fantasy or otherwise — working today? What draws you to them?

I am drawn to literary-fiction writers who aren't afraid to wade into genre. Kazuo Ishiguro is one of my favorites. Never Let Me Go is a sci-fi masterpiece, and The Buried Giant gives a literary twist to the fantasy quest. Kate Atkinson is another fave, particularly Life After Life. I'm also a big fan of two local DC-area authors who have new books out, Amber Sparks and Tara Laskowski. All of these authors can craft a sentence that makes me jealous while making me disappear into their storytelling.

Since you’ve just finished this project, and there’s no rest for the weary, what’s next?

I've always got new books I'm working on. Right now, I've got two active projects. The first one considers what would happen if no one in the world was able to commit an act of violence against another person. The second focuses on what if a small segment of the population had a genetic modification that allowed them to regenerate.

Holly Smith is editor-in-chief of the Independent. A three-hour daily commute made her an audiobook convert.