An Interview with Mary Rickert 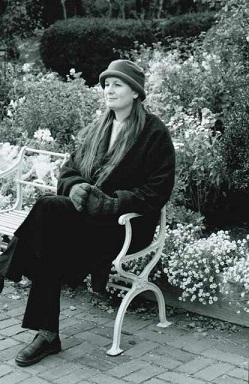 A coven of witches is the focus of Mary Rickert’s The Memory Garden. But the witches she creates aren’t the spell-casting, nose-wiggling kind, nor are they full of pyrotechnic magic like the Wicked Witch of the West. These witches may have some power, but for the most part, they are marginalized and misunderstood women who struggle with guilt, aging, and illness. The witch archetype runs throughout this tale of reunions and secrets, operating on both a literal and a metaphorical level. You can’t tell what’s real and what’s illusion.

Protagonist Nan is 79 years old and raises her 15-year-old daughter, Bay, on the outskirts of an unnamed rural town. Nan keeps a wild, eccentric garden where various plants grow from shoes, and Bay is a bit of an outcast at school because of the vague rumors surrounding her much older mother.

A strange, near-drowning accident at the local watering hole sets the plot in motion. Nan reveals that Bay was never in danger of drowning, and her ability to stay beneath the water for long periods is the result of her coming into her power. Nan also lets Bay know that she will soon be able to see ghosts, predict the weather, and heal people.

When Bay rejects all this, Nan reconvenes the coven.

What are your favorite ghost stories?

Peter Straub’s Ghost Story; Charles Dickens’ A Christmas Carol; Christopher Barzak’s One for Sorrow (made into the film “Jamie Marks Is Dead”); Sofia Samatar’s A Stranger in Olondria; Stephen King’s The Shining and “The Reach”; Joshilyn Jackson’s The Girl Who Stopped Swimming; Alice Hoffman’s novels, most of which contain ghosts; and Rosemary Timperley’s “Harry” and “Christmas Meeting.” I love Christmas ghost stories, in general, [such as] Glen Hirshberg’s “Flowers on Their Bridles, Hooves in the Air.” I’m going to stop now, but I just know that, by the time this comes to print, I’ll have remembered several more ghost stories I wish I had named.

What inspired you to write The Memory Garden?

[The editor Jonathan Strahan] solicited a piece from me for an anthology of witch stories. I thought this sounded like fun and sat down to write one. Eventually, I realized that my little story was basically a novel treatment. In other words, it wasn’t really the beginning of a novel and it wasn’t a short story, but the general material of something that could become a novel. I had recently decided to abandon trying to write novels and thus was very careful in my consideration of what I would do next, but finally decided to give it a try. That’s the root of it, so to speak.

But also, there’s this. I had recently moved back to Wisconsin, which I left when I was 18. While I had returned occasionally over the years, those visits had almost all occurred during winter. It would be fair to say that I hadn’t experienced a Wisconsin spring in 30 years. This created a delicious sense of time traveling. A scent in the wind or the play of light on the path would stop me in my tracks [as I was] suddenly struck by some long-buried moment from my youth. The entire experience was accentuated when I went to my high school class reunion. I hadn’t seen any of these people in so long; all I had to do was tilt my head slightly, or squint a little to remember the faces I had known, replaced by these older ones. It all created that melancholy feeling, which I actually enjoy, that is often a source for my fiction.

Finally, even finding one of those old classmates who had been a dear friend of mine and though we lost touch for decades, we found it easy to renew our bond, though it was still challenged by the business of life. In spite of our best intentions, we saw each other only once more before she died. Sharon’s death, and my regrets surrounding it (why couldn’t I have been better about making plans? Why wasn’t I better at keeping in touch?), deeply infused the novel I began writing shortly afterwards.

What is your writing process?

My writing process is a hairy beast, frightening to behold! I generally begin with a feeling, a phrase, a character, or a picture. Sometimes I don’t even have that, but it’s time to write, so I sit down and just start writing. For the novel, as I said, I initially thought I was writing a witch story for a young-adult anthology. I knew that I wanted to write something whimsical. My writing desk faces an old Victorian house across the street. I imagined that house (largely redesigned) on a quiet country road and then I threw shoes at it. I liked the shoes, but had no idea why they were there.

In the meantime, someone started planting flowers in them. Who was she? Why did people throw shoes at her house? I had no idea, but I liked her very much. I liked that she took these old shoes and made them into art. Eventually, I saw that she had a daughter, much younger than one might expect. Then it turned into a Stephen King story, I am not kidding. I love Stephen King, but something wasn’t right. Now, to be clear, the writing at this point was moving along very well. I absolutely knew what happened next. It was kind of easy. But at night, I would stare at the ceiling and think how something wasn’t right.

After a hundred pages, I decided that the story didn’t feel “true,” so I scrapped it and started over. I have this belief, I guess some people would call it a superstition, but it seems to be true of my writing life, that the muse always offers false gold first. That hundred-page wrong turn wasn’t my story, but was fashioned from someone whose work I admire. I took many other false turns after that, but none fooled me so well or for so long. I write longhand. Then I type it, print and edit until it gets kind of difficult to read, and then I type, print, repeat. By the time I finished The Memory Garden, I had seven file boxes filled with the draft work. Like I said, a beast!

Self-deception and guilt are two of the novel’s major themes. Do your characters frustrate you sometimes?

There is one character, Stella, who sometimes frustrated me because she was so unforthcoming, though she was in a difficult situation where she had been asked to represent herself dishonestly. It wasn’t her story, so she never had the opportunity to fully reveal her true nature, however. I loved the other characters very much and feel that their self-deception and guilt were reflective of the human experience. There are very few people who are free.

Witchcraft is strongly associated with nature in this novel. What role does the natural world play in your own life?

I was deeply influenced by the two years I spent living in Sequoia National Park. Only two years, and so long ago! Nonetheless, my time there did shape me. I remember when I moved from the park to upstate New York how strange it all seemed. I was hyper aware of the way “civilization” felt as opposed to the forest.

While I lived in Sequoia, I stayed in employee housing, which for one winter was a dormitory and the other a little cabin with indoor plumbing. I spent the summers in a cabin without plumbing, but there was a bathroom nearby. I didn’t even have to chop my own wood; the park provided kindling for the stoves in the summer cabins. I eventually ended up working in the personnel office and was able to schedule four 10-hour days with three days off. I often tweaked that further by working eight 10-hour days in a row, taking six days to go into the backcountry.

Now I live in a small city and have allergies. There are weeks when I huddle up in my house all day and blow my nose. But I do have a garden, and I mostly walk or ride my bike everywhere. My relationship to the natural world has obviously changed a great deal, but one of the perks of growing older is the lovely realization of the resources I have accumulated, and I would say that my time in Sequoia is a potent resource for me.

Much of your oeuvre relies on ambiguity. The witches in the novel, for instance, aren’t pyrotechnic with power, and it’s questionable ― even to themselves ― whether or not they even are witches. Why are you drawn to this corner-of-the-eye approach?

Language isn’t dead, and we aren’t, either. As a writer, I am very interested in activating the reader’s relationship to meaning. For instance, what does the word “witch” mean, and aren’t some definitions reflective of an ancient prejudice against women? A similar query can be applied to the word “power.” How can we expand our definition of power to include a yin approach? Now, all this said, I do believe fiction should contain its own map for reading the story.

Craig Laurance Gidney writes both contemporary, young adult and genre fiction. Gidney’s first collection, Sea, Swallow Me and Other Stories, was a finalist for the 2009 Lambda Literary Award. Bereft, a YA novel, appeared in 2013. Skin Deep Magic is his third book. Gidney lives and writes in his native Washington, DC.