An Interview with Laura McBride

The later-in-life debut novelist discusses the art of spinning stories. 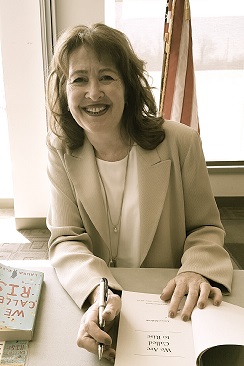 Laura McBride’s second novel, ‘Round Midnight, weaves together four very different women — June, Coral, Honorata, and Engracia — each connected in different ways to a midcentury nightclub in Las Vegas. McBride has achieved the difficult feat of keeping her book fast-paced while realizing her characters’ complex and nuanced emotions.

This novel revolves around four compelling women. Can you tell us about how you came to inhabit their lives, and they yours?

Inhabit is an apt word. The very first instant in which I became aware of this novel was while listening to a terrific retro act in a rundown Las Vegas nightclub. The setting was bleak — the casino was about to be imploded, the room smelled, the chairs were ripped — but the show: wow. And it was this contrast — the magic that the entertainers created with the audience in that unprepossessing space — which popped June Stein into my head, and from there, the story grew.

I like to imagine my characters fully before I commit them to paper. Honorata is someone I have been thinking about for nearly three decades. Engracia was a character in a novel I decided not to finish. Coral grew up in the writing of this book; I didn’t know she would appear until she did. I didn’t set out to write a novel about four women, about four women of these identities. I followed the strand of an inspiration — a nightclub act, June Stein — and I wove in the people June might encounter over a long life in one city.

‘Round Midnight interweaves seemingly separate stories in multiple sections. In that interweaving, it shares some structural similarities with your debut novel, We Are Called to Rise. Could you talk about your process and how you manage so many separate stories?

I don’t think of the two books as structurally similar. We Are Called to Rise is told in alternating first-person voices and takes place over eight months, while ’Round Midnight is told in the third person and spans 60 years. But the lives of the characters do interweave, and that interweaving is a fundamental quality of the plot, of the narrative suspense that pulls a reader forward.

Constructing that plot is a complicated mental task, and it brings me a pleasure akin to what I feel when tackling a well-made crossword puzzle or making my way in a foreign language. In ’Round Midnight, I was thinking about a small nightclub as a space that linked these disparate women together, and so I was deliberately playing with ideas about coincidence and connection. That was a trick — like managing the subjunctive voice in French — but fascinating, too. I had to persuade the reader to accept improbabilities without disbelieving them. There’s nothing easier than moving one’s plot forward with an unlikely coincidence — and few things I hate more as a reader — so it was a challenge to play at the edge of disaster, to risk an error I dislike for the thrill of getting it right.

‘Round Midnight is set in Las Vegas, your home. How do you think of place and what kind of research did you do to give us a flavor for midcentury Vegas?

’Round Midnight is a story that spans all of Las Vegas’ modern existence, and it is dependent on the sort of characters who kicked off the city’s growth, but I wasn’t particularly focused on telling a Vegas story in this novel; I wasn’t trying to capture an essence of the place. That said, setting is generally an important quality of a work for me. And in this story, which is partly a rumination on time and place and how they link individuals together, setting has a thematic role too.

As for getting the past right, I do what I call a “novelist’s research.” I drift around, listening to people and reading things that catch my attention — both in person and online — and I don’t take notes. I let everything that strikes me roll about in my mind, risking that I’ll forget a central detail. I’m going for tone, for mood, for the telling incident. If I get caught up in being accurate, my imagination sputters, I check myself, I become afraid of the artistic leap.

This is not to say that I don’t value accuracy and truth. I do. I teach academic research to my students. But accuracy and historical fact are something different from what I am doing. For me, writing creatively feels dangerous — the risks to my private self are large — so I try not to scare myself more by adding in an academic’s responsibilities.

You’ve had a career teaching college-level and adult students. How has that affected your writing?

I’m so lucky. I teach at a large community college, with a high percentage of first-generation, minority, and low-income students. It’s a privilege. I’ve toyed with the idea of setting a novel in a college, or at least having a character who works in one, because the environment is so interesting and the possibilities for dramatic action so large. But mostly, I try to protect the teaching relationship I have with students by not letting my author life impinge on their experience.

Still, the things I’ve learned from my students, the amazing stories they have shared with me about their lives, have shaped my understanding of the world. People deal with a lot of pain, and often we expect them to buck up and take care of business — I expect this from my students, too — but it’s grounding to remember just what anyone standing next to you in a line might have experienced in this life.

Teaching first-year writing has also made me a better writer. Like everything else, a lot of success is just doing the work, nose to the grindstone; exhorting my students to do this, year after year, has taught me a few things about persistence and commitment, too.

I’ve watched your fiction career with great interest. You were well established in a teaching career when your debut novel came out. Tell us how starting a new life as an author has affected you.

I wrote We Are Called to Rise when I was 50 years old. I didn’t expect to get published, and I didn’t worry about it. I had long before given up the dream of “being a writer.” And then, bam, just like that, I was one. Not just a writer, but a published writer, with a phenomenal editor and a wonderful publishing house. And that turns my world upside-down. Because I didn’t think it was possible. And if it is possible, then what else is possible? How much of my life-learned cynicism should I unravel? How much hope dare I feel?

I’m kinder than I was (which isn’t so terribly kind…) because I feel touched by the gods.

Yes, I wanted it to be a page turner. I think a novel should be, if one wants regular people — with jobs and kids and lives — to read it. My stories are complex. I ask the reader to wait a long time for the plot to come together, but I try to soften the blow by making that reader curious about what’s on the next page or in the next chapter.

I have had some wonderful reading experiences that are not like this — times I wondered if the writer had any idea I existed, or just imagined himself important enough to take my time without payment — and then had the unexpected but exhilarating pleasure of the whole thing coming together on the very last page, or perhaps the subtler pleasure of seeing that a good story can be built without consideration for suspense.

Writing such books is a meritorious challenge, but it’s not what I’m doing, it’s not what motivates me. I write for my readers’ pleasure. My definition of pleasure might not be the one a reader expects — it might involve complicated feelings and contradictions and grief — but it is still pleasure I am after.

As for how to write a page-turner? For whatever my advice is worth, I think it’s about keeping the reader in mind, not letting that reader dictate my story — wag her finger at my choices or my language or whom I chose to forgive — but thinking about her, about what might draw her in, about what she might wonder, about who in the story moves her.

I can imagine readers absorbing your book in one way post-election, and in an altogether different way had the election gone differently. Certainly, your book was written before this election. Can you comment on that?

I’m not sure I have a way to think about the book pre- and post-election. I wrote most of it in 2015, and while I was already interested in the presidential election, I didn’t imagine how it would turn out. More to the point, I wasn’t thinking about the election when writing.

I live in a place that was hard hit by the recession and has not yet fully recovered. I work with many economically challenged people. And I have had the opportunity to travel the country talking about the issues raised in We Are Called to Rise: immigrants, the Iraq and Afghanistan wars, our child-advocacy systems. So I was certainly aware that we Americans were not listening to each other very well, and that the parts of the country which had recovered from the recession could feel quite insufferable to the parts of the country that had not. It goes both ways, of course. The effort made by those who work in local, state, and federal government is disparaged in ways that are offensive. The antipathy directed at innocent people is appalling.

The fears that come with being economically imperiled (as opposed to being economically motivated) are not good for people. The hate that has spewed with that fear, and the hate with which those fears have been dismissed in return, is a uniquely sad moment. I’m proud to be American, and yet, we seem to be such fierce people: so quick to accuse and blame and reject, or perhaps attracted to those who would have us be that way. I wish we would listen to better angels; we would be a different people if we did. When I am speaking publicly, I sometimes talk about my own effort to make a daily practice of hating a little less and loving a little more, of fearing less and caring more.

And there’s the influence of my mom, who taught me that a novel was just as good a place to get the truth as anywhere else.

What’s next for you? Another novel in the works?

Of course! I have it full in my head, though perhaps I am getting a little bored with the story. It’s all about finding a space of time in which to get started, to get the thing rolling, and then it will be a matter of showing up and doing the work. I am a reliably hard worker, so for now, all I need is an opening break.

Martha Anne Toll’s nonfiction has appeared in the Millions, NPR, Heck, [PANK], the Nervous Breakdown, Tin House blog, Bloom, Narrative, and the Washington Independent Review of Books; her fiction in Slush Pile Magazine, Vol.1 Brooklyn, Yale’s Letters Journal, Poetica E Magazine, Referential Magazine, Inkapture Magazine, and Wild. Her novel in process, represented by the Einstein Literary Agency, was shortlisted for the 2016 Mary Rinehart Roberts fiction prize. She directs a social-justice foundation focused on preventing and ending homelessness and abolishing the death penalty. Please visit her at marthaannetoll.com and tweet to her at @marthaannetoll.