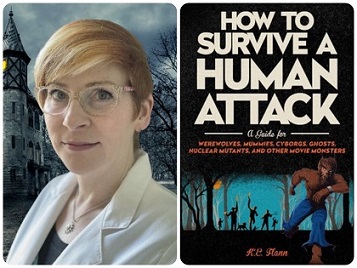 How to Survive a Human Attack: A Guide for Werewolves, Mummies, Cyborgs, Ghosts, Nuclear Mutants, and Other Movie Monsters, is K.E. Flann’s answer to The Zombie’s Survival Guide. In her view, it’s not humans who need saving; we’re the problem. Indeed, a staggering 100 percent of premature deaths of werewolves and other creatures are caused by humans (identifiable by our fanny packs and jeggings).

Kathy Flann, who writes humor for McSweeney’s and other publications under the nom de plume K.E. Flann, has always incorporated humor into her fiction, although this is her first book of satire. She is also the author of two award-winning story collections, Get A Grip and Smoky Ordinary, as well as Write On: Secrets to Crafting Better Stories.

You’re a keen observer of human behavior, which gives your humor depth. I know that many years ago you were a stand-up comedian. How did you draw on that experience to write this book?

One thing about performing comedy is that it’s unforgiving — if jokes don’t work quickly, you lose the audience. It’s true of all writing, of course. There’s a well-known metaphor of “the hook.” Writers constantly talk about “hooking” the reader, which is a fishing metaphor wherein the fish ends up dead, so I’ve always found that bizarre. But anyway, I think the experience of watching an audience — in person — lose interest is important training. When the audience is not hooked is when they glaze over and resemble dead fish.

I love your ability to expose [the absurdity of] human behavior by simply pointing it out. For instance, in the section “Where Can One Find, Study, or Smell Humans?” you write: “In general [humans] give a wide berth to unusual visitors, as well as ‘side eye,’ a look that appears menacing but indicates a likelihood they will post something about you online, rather than confronting you. If you do find yourself threatened in an urban area, it is best to lie on the sidewalk and pretend to need assistance. You will no longer be visible.” How does such specificity come into play in your humor?

I like to reverse-engineer things. I spent time looking at actual field guides for the study of animals — birds, zebras, various primates — and I thought about how such a text would or could be applied to humans. Those books are very specific, like, there’ll be diagrams of a zebra’s hoof and its various parts have names or whatever. Its migrations are discussed, its social habits, the best times and places to view them. So, I tried to mimic these kinds of guides, and I’d take a heading I saw in a lot of them, like “Migrations,” and just think about it for a while. I had to insert content that was equally specific to make the parody work. I’d think, When and where do humans (and specifically humans in movies) move around in groups? And it was like: rush hour, amusement park opening times, cruise ship embarkations, fun runs, Black Friday, etc. The part you quote above grew from the safety sections of guidebooks: What happens if you’re confronted by this animal? What should you do?

In the chapter “6(66) Habits of Highly Effective Witches,” your satire is particularly biting as you examine what it means to survive as a female in the human world. At what point in the writing process did the need for this chapter occur to you?

The witch is such a classic movie monster that I always knew she would be included. Initially, I thought her chapter would be a recipe book, like a “witch’s brews” type of thing. But a couple things took me in a different direction. First, I did research on witches, both to recall the films that feature them and to investigate the origins of witches in history. In this reading, I stumbled across the idea that the original “witches” were sort of like doctors. There always existed women who had the capability to support other people’s wellness, and they managed to do it outside of the system, which I thought was pretty badass! Then, the second thing that happened was that I was writing all the other chapters, and I realized that nearly all of the monsters were implied male. I got to thinking about those witches in the movies and how they are basically people running businesses. They often provide a (magical) service for a fee, but humans always renege on the contracts, something they justify with harsh judgments about the witch. It started to seem parallel to certain aspects of real public life — none of which are especially funny. I felt like the hard part was striking that balance of poking fun and poking (like with a sharp stick).

What part of writing the book tripped you up the most?

The mummy chapter was really hard! The mummy is not only royal, but a demigod. From whom will he accept advice? The mummy was one of the earliest pieces I wrote, before I really knew what the overall project was. The piece began as a second-person short story, a perspective I imagined was the mummy offering guidance to himself. It seemed like the only logical answer to the question about advice he would accept. The story was published in the journal Monkeybicycle, and it wasn’t a survival guide at all, despite the original title, “How to Survive a Human Attack: A Mummy’s Decree (Papyrus Edition).” It was a traditional narrative if you ignored the second-person point of view and the strange content. When it came to re-working it from fiction to humor/survival-guide parody later, I was overly attached to the idea that he had to give advice to himself. That’s something I can see now but couldn’t for a long time. A moment came when I realized that all the struggles with the mummy’s chapter were related to the voice problem. Once I let that go, I could reverse-engineer his situation like I had with the other monsters. What was his basic problem? Home security! Humans keep breaking into the tomb and trying to steal his stuff. That’s how we end up with the Third Eye Tomb Security System (finally!).

The book’s illustrations are hilarious and underscore your humor. Did you work collaboratively with artist Joseph McDermott?

The publisher connected with Joseph McDermott on my behalf, and we never had direct contact during the process. In the manuscript, I had included descriptions of suggested illustrations, many of which he did opt to draw. It was so cool when various drafts…would come back to me illustrated, and I’d see how he’d taken an idea and run with it. I felt like we “got” each other’s styles and humor. It was beyond what I’d dreamed, truly. And actually, I’d be remiss if I didn’t mention Celeste Joyce, the designer, too. The layouts and the distressed style and so forth — that was all her. This was definitely the most collaborative project I’ve ever done.

Can you talk about the difference in process between writing literary fiction and writing satire? Is it possible to teach writers how to be funny or is it an innate gift that the rest of us long to have?

I probably need to ponder this for longer, but my sense is that writing fiction is more like building something out of nothing and writing satire is like taking something that already exists and scraping away its layers to expose underlying structure/assumptions. I do think people can be taught to write these forms. I feel like most people already have imagination. A person’s relationship to their own thinking [can be] honed, and attention can be trained. And that’s really what’s going on with satire — training one’s attention on something in a certain way.

[Editor’s note: Click here to read the Independent’s review of How to Survive a Human Attack.]

Jen Grow's debut collection, My Life as a Mermaid, was the winner of the 2012 Dzanc Books Short Story Collection Competition. She was also awarded the 2016 Mary Sawyers Baker Prize for her work. Her fiction and nonfiction have appeared in the Writer's Chronicle, About Place Journal, the Sun Magazine, the GSU Review, Hunger Mountain, Indiana Review, and many other publications. She received a Ruby Award from the Robert W. Deutsch Foundation and two Individual Artist Awards from the Maryland State Arts Council for her work. She lives in Baltimore.