An Interview with Patrick K. O’Donnell

The bestselling author talks Marbleheaders, lesser-known historical figures, and how his subjects always choose him. 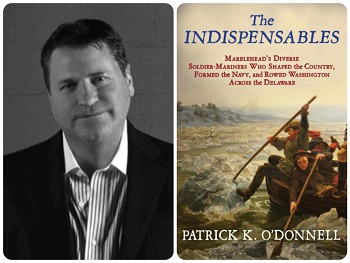 I've been reading military/combat historian Patrick K. O’Donnell’s books for a number of years. He had me hooked with Washington's Immortals: The Untold Story of an Elite Regiment Who Changed the Course of the Revolution (2016), about the Maryland Continental Line during the War of Independence. And, in 2018, The Unknowns: The Story of the Unknown Soldier and WWI's Most Decorated Heroes Who Brought Him Home once again brought to life a familiar tale with new and important details.

Now, in his new book, The Indispensables: The Diverse Soldier-Mariners Who Shaped the Country, Formed the Navy, and Rowed Washington Across the Delaware, O’Donnell mines untapped resources to give a raw-edged glimpse of the soldiers and sailors from Marblehead, Massachusetts, who saved George Washington's army — and America’s quest for independence — from destruction on more than one occasion. I recently sat down with O’Donnell to discuss his latest release.

You seem to be drawn to the War of Independence. What makes you keep returning to that period in American history?

Our founding is our most important story as a nation — it forms the bedrock of who we are as Americans. Instead of focusing on the more well-known, great figures of the American Revolution, my books focus on untold stories — the ordinary soldier or the forgotten female Loyalist or Patriot who played a pivotal role. Through letters, diaries, and pension applications — the great untapped oral histories of the American Revolution — I've been able to put the reader into the boots and shoes of the participants, often in their own words. The story is nuanced, bloody, rich in pathos, dramatic, and gritty. This is a side of the war with which most Americans are unfamiliar. It's a miracle we prevailed over the greatest military power at the time, as well as our fellow Americans, since the war was not only a global conflict, a revolution, but also a civil war.

Did you select your book's topic, or did it select you?

All my books have found me. I didn't find them. Each is a rich journey that I savor. I walk the bloody ground they fought over, visit the houses they lived in and even their graves. I spend years researching each book, often writing multiple [books] at a time. In this story, I rebuilt the regiment from primary, original-source documents to uncover their previously largely untold story, which first came to me over a decade ago through my work on my bestselling book Washington’s Immortals.

You bring to life so many lesser-known figures of the era. Why have they been lost to the dustbin of history?

Most of my books are smaller, untold stories that tell a larger, important story. Only a few histories revolve around a regiment or group of people during the Revolution. Most revolve around the elite men of the war. The Indispensables is unique because it revolves around ordinary soldiers and, to a lesser extent, the people of the town, like the women who took up arms and rioted to secure food for their starving families in the early part of the war. Scholars of the Revolution have noted in their praise of the book [that] it is also well researched and documented. The book is a fast-flowing, cinematic sort of “Band of Brothers” narrative that captures their story. I put my readers in their boots and shoes; as one reader noted: “I smelled the fish, the wet rigging on the boats, and the acrid scent of gunpowder in the battle scenes.”

This research unearthed previously unknown, remarkable individuals and stories, like Dr. Nathaniel Bond, the Harvard-trained expert on viruses. A body-snatcher/resurrectionist, Bond was initially accused of being a Loyalist and feared death from an angry mob but later saved Washington's army by inoculating it [against] a deadly virus raging through the troops.

In The Indispensables, you focus on not only the men from Marblehead, but the town itself. Why did you think it was important for readers to understand the place?

Marblehead, located roughly 16 miles north of Boston, was a spearhead of the American Revolution before the war and also a microcosm. A raging virus, political violence, disarmament, and misinformation all divided Americans and Marblehead in the 1770s. People say we are living in unprecedented times. We're not. Americans [back then] fought a virus, each other, and the greatest military power on Earth. Many of the thought leaders of the Revolution and a future vice president would hail from Marblehead. Marbleheaders helped finance the war, established valuable foreign connections, and made critical decisions as members of the Massachusetts Provincial Congress. They would later also have a profound influence on the U.S. Constitution.

Your story resurrects an integrated American fighting force consisting of whites, Blacks, Native Americans, and Hispanics who collectively served the Patriot cause. How did uncovering this little-known story energize you as you wrote the book?

The Indispensables is a story of unity: Like an alloy is stronger than iron, these diverse Americans together are stronger than their individual parts. In 2004, I was a volunteer combat historian in a rifle platoon during the bloody Battle of Fallujah [We Were One: Shoulder to Shoulder with the Marines Who Took Fallujah]. The memory seared in my mind after carrying a mortally wounded Marine out of a firefight was looking back at the remnants of his platoon, who had just sustained some of the highest casualties of the entire battle. Each was forlorn and had the thousand-yard stare, but they represented the beauty of America, which included Native Americans, a Marine from Guam, Black Americans, and Hispanic Americans. Instead of wavering after the loss of their brother in arms, we marched forward to clear the next house filled with insurgents. These Marines were following in the footsteps of a tradition forged by the Marbleheaders, arguably one of America's first diverse regiments and one of its greatest fighting units.

How important to the cause of Independence were the Indispensables, and why did you give them that moniker?

There are innumerable examples of the Marbleheaders' indispensable role. They saved the Continental Army at least three times. First, at the “American Dunkirk,” they rowed Washington's army in the [dead] of night, transporting over 9,000 men across the [mile-wide] East River, aided by a miraculous fog. At Pelham Bay, their crucial delaying action stopped the British from cutting off the Continental Army’s retreat. At the Battle of Trenton, only boats crewed by Marbleheaders were able to make the famous crossing of the ice-choked Delaware River that changed the entire course of the American Revolution.

They formed the origins of the U.S. Navy. In the earliest days of the Revolution, their fishing boats brought in the scarcest resource of the war — gunpowder. They converted their fishing ships into warships, trade routes into military supply lines, and their decades-old trading relationships into valuable foreign alliances, the first Americans to do so. They were crucial financiers and decision-makers of the Revolution.

Handpicked members of the regiment formed an elite force, Washington’s Guard — or the Life Guard — that protected the commander-in-chief and would later…[halt] an assassination attempt on his life. In the first national public-health declaration, fighting regimental surgeon and company commander Dr. Bond would save Washington's army by inoculating it from the virus that was devastating its ranks. One historian called it arguably the most important strategic decision of Washington's military career.

What is it about elite fighting units that you find compelling?

Since graduating from college, I've interviewed thousands of veterans from WWI, WWII, and the Korean War to modern-day and amassed one of the largest private collections of elite units’ and special operations forces’ oral histories and e-histories. These individuals are often at the right place at the right time to alter the course of events. A small number of individuals, or in some cases, a single individual, often shaped history. As British historian George Trevelyan noted regarding the Marbleheaders, “It may be doubted whether so small a number of men ever employed so short a space of time with greater or more lasting results upon the history of the world.”

What can younger Americans take away from your books?

A single individual or small group of individuals can change the course of history. The Marbleheaders and a company of men from nearby Beverly set an inclusive standard of unity that tragically wouldn't be matched for years. Perhaps most importantly, Elbridge Gerry and other Founders understood power and how to disperse and defuse it so power could not be concentrated in the hands of a few and derail liberty. It's also about sacrifice. Americans, starving, shoeless, with bloody feet, gave up their fortunes and, in some cases, their lives and carried the invisible scars of war for a conflict and an idea — America — that many Americans take for granted.

Kitty Kelley, the biographer of celebrities including Oprah Winfrey, Nancy Reagan, Elizabeth Taylor and Frank Sinatra, answers questions about her famous subjects and her writing process.

An Interview with Craig Laurance Gidney