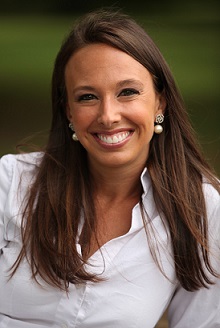 In 1891, Ginny Loftin’s young life takes an unexpected turn when her childhood love abandons her for a rich heiress. She and her four artistically minded siblings navigate their way through the Gilded Age’s treacherous social scene, with both devastating and beautiful consequences. Joy Callaway’s The Fifth Avenue Artists Society is their story.

First, you have to tell us about the (darkly) glamorous artists’ society that the novel takes its name from. The Society's host, John Hopper, says he was inspired by the creative salons of France. What was your inspiration for that mix of American artists?

I suppose when I thought of what I wanted the Society to be — a mix of artists of all types, amateur and professional, known and unfamiliar — I thought of who I would want to meet there, and who, from the myriad wonderful Gilded Age artists, could I see mingling easily with any sort of crowd. Edith Wharton is one of my all-time favorites. I read her over and over and often, so I knew right off that I wanted her to play a part. And then there’s Oscar Wilde. He was such an eccentric and so ridiculously talented. But I also wanted to add in some artists that would serve as a sort of inverse to the typical Society participants, so I chose people like Maude Adams because she’s always fascinated me. I decided to include actor and artist Hamilton Revelle because he was likely friends with Ginny in real life — he painted a lovely picture of their home in the Bronx that hangs right above one of my bookshelves.

One of the novel's most poignant themes is the healing power of creative expression. Ginny processes her heartbreak after being abandoned by Charlie by writing a novel about it; her sister Alevia finds comfort in music; their friend Cherie turns to painting as a lifeline from her suffocating marriage and pregnancy. How does that alchemy, the magical transformation of pain into beauty, happen?

I’m not sure, and I think that’s the mystery and splendor of it. I certainly don’t think it’s intentional. I’m almost positive that most artists start out creating in pain simply because they know it’ll take the edge off, and then, suddenly, something gorgeous and real is in front of them and it resonates with all sorts of people because the emotion is so raw. That’s when the true beauty emerges, I think: when art transcends the artist to give light or some sort of personal understanding to someone else.

In many ways, this story is about loyalty. Franklin tests his sisters’ and his mother’s loyalty by getting involved in a dangerous business, and Ginny and Charlie struggle with loyalty to their hearts and their families. Is loyalty more moving when it comes easily and without question, or when someone fails at it?

I’m not sure I could choose. Blind, natural loyalty is a rare, lovely thing — it awards trust and a reputation of steadfastness — but broken loyalty can be beautiful, too, because it gives way to the possibility of redemption. I suppose my favorite sort of loyalty is the kind in which one strives to absolute faithfulness but inexplicably fails and tirelessly works to earn back the love and trust they’ve lost. Most of us fall into this category, I think, as do my characters. I believe that missteps and lessons learned make us better people.

This story evolved from your family's own history. Can you tell us more about how your family inspired the novel, and how you gave their story life?

The story is based on my grandma’s grandma, Alice Lynch Gorton (Mae in the novel) and her siblings, Virginia, Anne (Bess), Alevia, and Franklin Lynch. I’d heard about them my whole life because my family is very into preserving family history — it’s not uncommon for their stories to make their way into regular conversation. One Christmas, after something had brought up the Lynch family of artists — it was probably because we were sitting in my grandma’s living room with their portraits all around us — I decided that I had to write about them.

Were there any choices you had to make in the course of fictionalizing your family's story that were particularly difficult?

I’m not sure that anything was necessarily difficult, but deviating from actual historical fact was a bit interesting — fun, too! About 60 percent of the book is actually true to life, but the Society is something I imagined and so is another plot point that I’ll not mention here. When weaving fact with fiction, I tried to create things that the Lynches may have encountered, and the Society is something that came from simply knowing that the siblings mingled with famous artists quite often and that Ginny helped create an artists’ colony in her later years.

I will say that the strangest thing I encountered was realizing that I’d created a very true-to-life relationship in Ginny and Charlie (Charlie is fictional) after I’d already written the novel. To make a long story short, we came across three of Ginny’s diaries for sale on an antique-books site, and she mentions a similar sort of relationship.

I loved that Ginny was so moved by Washington Irving's writing. He's not an author you hear quoted much these days, and I'd venture to say he's out of fashion. Does Irving still have something to say to us today?

Ginny was inspired by Irving in her actual life, so much so that she penned a book, Washington Irving Footprints, illustrated by renowned etcher Bernhardt Wall. He’s certainly still relevant today, and I think it’s high time he came back into vogue. He was one of our country’s first truly American authors, and though he often wrote humorously, his body of work is so important to who we are. He wrote about our history — about George Washington and the founding of New York — and brought us the classics Rip Van Winkle and The Legend of Sleepy Hollow and is even thought to be responsible for popularizing some old English Christmas customs in our country.

Carrie Callaghan’s fiction has appeared in Silk Road, Floodwall, the MacGuffin, the Mulberry Fork Review, and elsewhere. She is a contributing editor at the Washington Independent Review of Books. Follow her on Twitter at @carriecallaghan.

Vanessa Becknell does a Q&A with Joyce Carol Oates about her book The Corn Maiden and Other Nightmares.