An Interview with John Copenhaver

The debut novelist talks homophobia, layered narratives, and the tricks of the photographer’s trade. 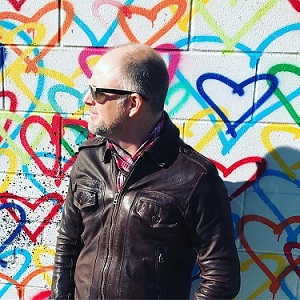 "Dodging" and "burning” refer to techniques a photographer can use to manipulate his subjects’ appearance. In his debut novel by that same name, John Copenhaver beautifully renders the lives of four young people — Bunny Prescott, Jay Greenwood, Robbie Bliss, and Robbie’s kid sister, Ceola — through alternating lenses of photographs, letters, diary entries, notes, and other documents.

Set primarily in Royal Oak, Virginia, during WWII, the events in Dodging and Burning incorporate elements of mystery, war photography, sexual orientation, and loss of innocence into one exquisite frame, leaving the reader turning pages even once the final word appears.

Copenhaver and I recently sat down to talk about the book.

What did you know about this story before you began writing the novel?

In grad school, I took a course examining how photography influenced 20th-century fiction. Among other things, we read Susan Sontag’s On Photography, which made me fascinated with how photographs misrepresent the truth and require us to contextualize them. I began thinking about how photography could be a metaphor for sexual orientation because it depends on a viewer’s interpretation.

The role of documenting, whether in writing or in photography, permeates the novel. The photograph on the cover is central to the plot, but you also have a second photograph — of Robbie with Ceola and his mother, taken on the day he ships off to WWII. Can you talk a little about how you decided on this starting point for Ceola’s narration?

I like creating resonance in a novel, so it was a nice pairing. Originally, Ceola’s character wasn’t addressing Robbie. That came later. But I liked the idea of her keeping Robbie alive by talking to him.

You did a great deal of research before writing this novel. What was the most shocking discovery you made during that process?

Although I’d studied photography previously, I developed a new appreciation for war photography. They hauled around heavy equipment, nothing like our small phones. It was grueling training for taking pictures during combat situations. They had to change light-sensitive film during the day under a cover while bullets were whizzing by.

And they wouldn’t print photos of dead soldiers, correct?

At first, they didn’t print dead soldiers, but the famous photo “Dead Americans on Buna Beach” changed all of that in 1943. The epigraph of my novel comes from the editorial caption to that photo.

As a memoirist, I am in awe of your choices in point of view. The letters and journal entries from Robbie; letters between Ceola and Bunny; the mystery-magazine story “The Date with Death”; the notes exchanged among Jay, Ceola, and Bunny. These are all artifacts that further the story, creating layer after layer. Did you ever consider writing strictly from Jay’s point of view to garner sympathy for his story?

My gut instinct was to avoid telling the story through his eyes. That’s been done so much. At one point during a writing workshop, someone suggested I try that, so I did. It was a valuable exercise to learn his character, but what I found was those passages were fragmented and exposed too much. Jay needed to remain a mystery to the reader. I wanted to create an ache in the reader to get to know him well.

Given the changes in culture over the past 70-plus years, I was struck by the hatred toward LGBTQ characters in your novel. Certainly, we still see too much of this today, but what surprised me was how average Americans were the ones perpetrating the violence in your novel.

It is eye-opening to realize how homosexuality was viewed as an abnormality only a few years ago. There were laws against consensual sex acts. At the time, there was a strong urge to narrowly define what was “American.” What was inside that narrow definition, usually a role in a patriarchal nuclear family, was celebrated. What fell outside that narrow definition was shunned. Much of this book is set in rural Virginia. The divide between small town and big city is striking because you have an underground world in DC and other urban areas.

It’s almost like there is the anonymity in big cities to allow for diversity.

To a certain extent. Yet, there were segregated gay bars during the 1940s and 50s.

Unfortunately, we’re seeing a resurgence of this anti-LGBTQ sentiment. I wonder about your reaction to having this book debut during this backlash in American history.

I finished the book in 2012, so our political climate was very different. I think if anything has changed since then, it is that Americans who read are galvanized to pay attention to people of color and gay writers. It’s the whole “woke” movement. It pulls people together.

This novel combines the plot twists of the mystery genre with fantastic character development and sophisticated literary devices. As Jay tells Ceola, “Stories are like nesting eggs…one inside another, inside another, on and on. Fucking endless.” How did you pull off this fabulous layering of stories?

Revision. I knew I wanted to do something rather complex. I guess it’s part of my personality to have a challenge. Writing the novel was something I had to grow into as a writer. The line you chose describes what I was trying to do. Each layer gets you a little closer to the truth.

Which writers influenced Dodging and Burning?

I’d have to say Margaret Atwood’s Blind Assassin and Possession by A.S. Byatt. Other writers would include Patricia Highsmith, Raymond Chandler, and Dorothy Hughes’ 1940s hardboiled mysteries. People have asked me about Atonement [by Ian McEwan], but I didn’t read that until after I’d finished writing Dodging and Burning.

What is your next project?

I’m polishing up a novel manuscript, set in post-WWII DC, about two teenage girls, one of whom is (perhaps) a budding sociopath. They work together as amateur detectives to unwind the mysterious connection between an assault on their favorite teacher and the brutal murder of a classmate. I like to think of the novel as a femme fatale’s coming-of-age story.

An Interview with Eryk Pruitt

The "rural noir" writer talks filmmaking, the South, and What We Reckon.