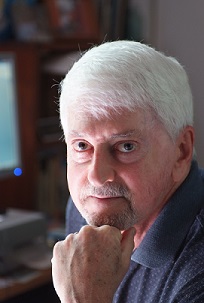 A former longtime newspaperman at the Washington Post and current member of the Independent’s board of directors, Eugene L. Meyer is an experienced reporter and researcher. He put those skills to good use while writing his latest book, Five for Freedom: The African American Soldiers in John Brown's Army, published recently by Chicago Review Press.

When did you first get the idea to write Five for Freedom? Had you done any previous reporting on John Brown and Harpers Ferry, or did you start from scratch with this book?

In November 2000, I did a short piece for the Washington Post about a memorial plaque dedication to one of the five [African Americans in John Brown’s party] at a cemetery near FedEx Field in suburban Landover, Maryland. His name was Osborne Perry Anderson. He was the sole survivor and wrote the only insider account of the raid. Writing about him made me aware of the other four. When I left the Post in 2004, I did a much longer article about him for the newspaper’s Sunday magazine.

I was intrigued by his relationship with Mary Ann Shadd Cary, a free woman of color he had followed to Chatham, Ontario, where he worked for her newspaper, the Provincial Freeman. Both had resettled in Washington after the Civil War, and her papers were at Howard University. Examining them, I found nothing about him. What I did find were very affecting letters she had published from John Anthony Copeland, another one of the five, to his family in Oberlin, Ohio, on the day of his execution.

I realized there was a larger story to tell, but it had to be about all five. Thus was born Five for Freedom. They were truly “hidden figures,” overshadowed by John Brown, their towering, martyred commander, and it was long past time that their full stories be told.

How hard did you have to dig to uncover the story of these African-American men, and where did you find most of the information?

Shields Green, an escaped slave from Charleston, South Carolina, was the most elusive. Little is known and documented prior to his arrival in Rochester, New York, where he lived for a time with Frederick Douglass. It has been written that he escaped bondage, on a north-bound ship in Charleston harbor, after his wife died, leaving a young son. His slave name was Esau Brown.

I scoured the Charleston Mercury for the probable dates of his departure, hoping to find a fugitive-slave ad that fit his profile. I came up with nothing. But I learned there was a large slaveholder named Alexander Brown, whose roster of human chattel in 1850 included a 14-year-old male who could have been Esau/Shields. The 1860 slave census does not show a 24-year-old male but includes a 3-year-old boy, whose age would match up with the son he left behind. I speculate in an end note that these skeletal facts hint at the backstory.

For the 2009 sesquicentennial of the John Brown raid, National Park Service rangers at Harpers Ferry sought out descendants. Green’s were nowhere to be found. I was able to track down descendants of the other four, some of whom reside in the Washington, DC, metropolitan area. The most geographically distant, Ashton Robinson, lives in the high desert outside tiny Cannonville, Utah, and he generously shared with me 25 years of research into his family history. Other documentary sources are noted in an 11-page bibliography at the end of Five for Freedom.

In the course of researching Five for Freedom, were any questions left unanswered? That is, did you run into any walls where the historical record simply ceased?

Esau Brown apparently changed his name to Shields Green. How and why that name in particular? Osborne Anderson’s war record is murky. Some sources have said he enlisted in the Union army, but there is no documentation. Others suggest he enlisted under an assumed name. A museum in North Buxton, Ontario, includes his name among more than 100 Afro-Canadians who joined the U.S. Colored Troops, but he is listed under “regiment unknown.” There are gaps in his résumé yet to fill.

Like World War II, the Civil War inspires endless books, both fiction and nonfiction. What is it about these particular conflicts that makes them so endlessly fascinating?

Not unlike the Second World War, the American Civil War was a seismic, central conflict fought over enormous political and social issues that continue to divide and define us. Are we a union — the truly United States of America — or a confederation of independent states? Can there ever be racial equality and comity when color continues to play such a large role in how we see ourselves? To put it another way, Ex Pluribus Unum: Out of many, will we ever be one?

I have been working on a memoir, basically to refute the canard of “fake news.” I write about what were current events, now history, that I witnessed, from a personal perspective. I also grapple with issues of ethics and conscience that arise when a reporter, in this case me, feels strongly or ambivalent about an issue he is assigned to cover. It will be about the challenges of truth-telling in tumultuous times. There are other projects under consideration, but at the moment, this is on the horizon.