An Interview with Christopher Moore

One of the funniest novelists out there talks about his latest, Secondhand Souls. 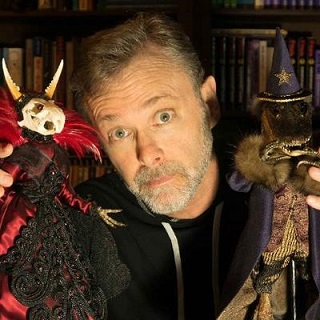 A world without velvet-pantalooned squirrel people is one not worth living in. Luckily for fans of Christopher Moore’s earlier work, A Dirty Job, the natty vermin — along with a host of other weird, fiendish charmers — are back in Secondhand Souls, which comes out today from HarperCollins. Here, the author chats about the undead, the ridiculousness of big-city rents, and the danger of hooking up with dragons.

Secondhand Souls picks up where A Dirty Job leaves off. What made you want to revisit characters like Charlie, Lily, Detective Rivera, and Minty Fresh? Was it for the sheer pleasure of writing about someone named “Minty Fresh”?

It was mostly by popular demand. So many people had been asking for more with those characters for so long that I had been continually thinking about it, but always when I was working on something else, set in some other place. I finally found a way to come at the story so I wouldn't be writing the same book twice, so I went at it.

The Hellhounds are back in Secondhand Souls, too, protecting 7-year-old Sophie from the bad guys. The Emperor’s “faithful dogs,” Bummer and Lazarus, are also back. Why no guardian cats? Is it that they’d happily watch us die?

That's probably true. I like both cats and dogs, but cats don't really inspire the loyalty and dedication that dogs do. Plus, Bummer and Lazarus are based on real dogs who lived in San Francisco in the late 1800s (Mark Twain wrote Bummer's obituary for the San Francisco Examiner), and Hellhounds are also a part of underworld mythology that I thought would be fun to explore. The fact that they're huge, indestructible, and ferocious, yet deeply silly, makes them fun to write.

You set lots of your vampire/monster/ghost books in San Francisco. Isn’t the Bay Area a little pricey for the undead?

It's gotten worse over the years until it's absolutely ridiculous now. But that's the way of modern cities. It's not much easier to find a reasonably priced apartment in Paris, London, or New York, either. When I started writing about San Francisco, though, in '95, it was a little more feasible for working people to live in the city. You can't let lack of imaginary money stop you. If you're going to ask readers to believe in pony-sized dogs from hell hunting down a Subaru, you have to take the next step and ask them to believe that affordable rents could exist.

Aside from the cast of Secondhand Souls, are there any other characters you’re planning to revisit someday? Like maybe the angel Raziel from Lamb? Please?

I'm really not. Not at this point, anyway. I've knocked around the idea of bringing back Bleu from Sacré Bleu, but not so much because readers love her, because she's a bit of a villain, but because I love researching the art and history her story is built around. And Pocket from Fool and The Serpent of Venice. I love working in Shakespeare's world and bollocksing-up his language. Pocket is great fun to write.

Speaking of your other books, in The Serpent of Venice, Viv, the sea monster, sprints around the bases the first time she meets Pocket, the fool, and doesn’t even buy him dinner afterward. Doesn’t that send the wrong message to the kids?

No, it sends the perfect message: Do not shag the dragon. I think that's a lesson every kid should learn one way or another.

I think all of Henry James, as well as Jane Austen and the Brontes. But it appears that there are people already at work on the latter two, so take heart.

I couldn’t read Fool in public without snorting out loud, alarming people around me. Thanks a lot.

You're welcome. That's what I was going for.

Holly Smith is managing editor of the Washington Independent Review of Books. She reviewed The Serpent of Venice last year and still cracks up over Viv and Pocket’s pas de deux. Follow her on Twitter at @HSmithWrites.