An Interview with Emily Schultz

The author discusses relationships, mother-daughter conflicts, and the relative merits of zombies. 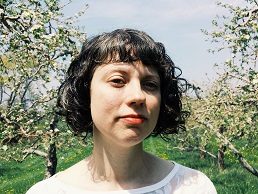 In Emily Schultz’s new novel, The Blondes, protagonist Hazel Hayes needs to escape: from Toronto, and from her affair with Karl, a married professor. Settling into a small apartment in Brooklyn, she tries to still her mind enough to write her master’s thesis. Enter an unexpected pregnancy.

As Hazel attempts to make a plan for her future, she witnesses a blonde stranger savagely attacking a young woman on the subway platform. Within weeks, there are reports all over the world of blonde women raging and killing people. Soon, Hazel is backtracking to Canada, hoping to find safe haven and ending up trapped with an unexpected companion: Karl’s wife.

Well, a woman’s life is a complex thing when she’s in her 20s! In a way, your identity is still being formed, and it’s being formed in a raw, real world that, by design, is stacked against you. As well, that time between the end of school and adulthood can seem like crisis after crisis and every decision a potential disaster. I wrote The Blondes in my 30s, though. I picked a younger character because I was able to bring that tension into a situation of worldwide crisis. Some readers have bristled at Hazel’s acidic qualities — but that’s her age. Some may be too close to it still.

There’s a line in the book where Hazel says beautiful women are full of rage over their own power. I interpreted this as the driving idea behind the novel. Do you share this view with Hazel, or is it particular to her way of seeing the world?

The source of that might be Hazel’s age again. It’s very difficult to be that age and not have “us and them” attitudes. There is a truth to Hazel’s belief, though — a beautiful woman does have power, but it’s a complicated power and one that changes with age. A great example would be how Madonna has been treated over the years. She’s been called out for her sexuality in increasing waves of umbrage the older she gets.

Hazel’s pattern is that she abandons people. Where does this come from?

I’m not sure it’s a pattern — Hazel also gets abandoned herself. But she does leave her best friend, Larissa, when she’s at her lowest. Larissa is the successful best friend who married young and has already established herself both in home and career in ways Hazel has not, but the SHV virus, or Blonde Fury, has taken its toll, and Larissa is coming apart mentally and financially.

What Hazel does is to look out for Number One — she is, after all, pregnant and penniless — instead of caring for her friend. I wanted to show that this virus has victims even beyond those who turn rabid and die in a violent manner. And I wanted to show Larissa, a very smart blonde, dealing with the fallout of societal prejudices. Hazel, I think, has to stand up for herself and make a survivalist move.

I read that different cultures interpreted the tone of your novel differently. Some thought it was satire; others thought horror, allegory, etc. I saw all of these elements but thought it was a love story between Hazel and her unborn baby.

Again, that interpretation is just as true as the others. The writing of this book was my own debate about whether I could afford to have a child or not, whether I was too old at 36. I felt that choice was going to be taken away from me, so that’s part of why Hazel is in a world where her ability to choose is threatened.

Do you think Karl prefers abuse over abandonment?

He’s very compulsive sexually and he needs women in his life, but that comes from obsession, not love, and it keeps him from having healthy relationships. Actually, it’s tough to write characters in healthy relationships — they’re boring. I also think Karl and Hazel’s profession is important. Academics are a curious people. On the outside, they seem very together: They take the right jobs, attend the correct parties. But maybe it’s all that interior time that gives them curious obsessions and maybe too much insight into themselves and others.

On some level, is The Blondes offering up motherhood as the antidote for rage?

No, I’d say growing older and wiser is a much surer calming device. I am a mother now and I have a whole new set of rages!

In the past few years, zombies have gone mainstream, so they’re obviously getting at something fundamental in the human psyche. Did you set out to write a variation on the ubiquitous zombie apocalypse?

I grew up with zombies. It’s part of our pop language and goes beyond our anxieties about disease to a very deep place about what being human means. But I knew I wanted to approach things differently. The apocalypse can be a lazy version of the future. I knew I didn’t want society to totally collapse. I wanted to show bureaucracy and its inelegant solutions. I wanted to show ironic reactions and fleeting terror. Basically, what it’s like to live in New York on any given day.

I love the Canada/U.S.-relations aspect of the novel. There’s a hilarious line where Hazel says that we Canadians have no optimism. It’s a joke, but it rings somewhat true. For instance, I had no idea how drearily pragmatic I was (in comparison to Americans) until moving here to the States. Why did you want the novel to take place in both countries?

My family is American. They left during the Vietnam War for Canada. After we grew up, my parents stayed, but my brothers and I moved back, so escaping from the government is part of my family’s history. I also thought that showing a dark side to Canada might be an original take to counter the idea of Canada as a utopia. And I do have two sides to my personality: American optimism and Canadian resignation. Hopefully, it’s a good mix for a writer.

The Blondes has something to say about mothers and daughters along the lines of not knowing how hard it is to raise a daughter is until we have one. Also, something more Freudian and uncomfortable: that the daughter’s youth and sexuality will necessarily surpass that of the mother. Despite this, I was left with an uplifting feeling at the end of the book because love manages to transcend these conflicts.

There is a mother-daughter battle, but at its heart it might be the battle that lurks between all women: the fact that we still need and depend on one another. While I didn’t set out to arrive there, that’s what I think the book is about. Not fearing each other as competition will help us survive whatever is thrown at us.

Dorothy Reno is a Canadian short-story writer and a diehard brunette.

An Interview with Libby Copeland

The author talks identity, spit kits, and the hidden pitfalls of untangling your DNA.