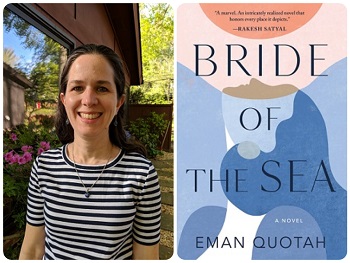 Eman Quotah’s debut novel, Bride of the Sea, spans more than 40 years in the life of protagonist Hanadi, whose parents’ separation leads to a peripatetic childhood. While her father, back in Saudi Arabia, devotes much of his life to searching for his daughter even as he starts a second family, her mother, who remained in America with the girl, moves them every time she senses he’s close. Quotah deftly weaves elements of her own bicultural experience throughout Bride of the Sea, the first Saudi American novel ever published.

Can you tell me about your family life growing up?

My parents met in California when my dad was studying there in the 1960s. My mom grew up in a small town outside of San Francisco. They moved back to Saudi after my grandfather’s death, and I was born there, but we came back to the States when I was pretty little. My dad got his master’s in Seattle, and then we moved to Ohio until my dad finished his Ph.D. Obviously, moving to Saudi was a big culture shock for my mom, but moving to Ohio was, as well, due to the cold. We moved back to Saudi when I was 8, and we spent every summer in Ohio, so I spent a big chunk of my childhood in both places. I went to English-language school in Saudi for a couple of years and then switched over to an Arabic school, so I’m bilingual. I was there through the 1980s and into the early 1990s, during the First Gulf War. I moved to the States for college, and I’ve been living here since then.

How did you shape the character Hanadi, who was born and raised in America — particularly, how she adapted when she first visited Saudi Arabia as a teenager? What did you want to show there?

I was imagining what if I lost half of my childhood, and what if I had not grown up the way I did. Of course, she (Hanadi) is a character who has two Saudi parents, unlike me, but she has been kept away from that country where her parents are from for so long. I moved to Saudi when I was 8, so we had been away for a long time, but I was much younger than she was when she went back.

I could imagine what it was like to suddenly go to a place where you hadn’t spent a lot of time. I have some memories of when we moved back. I was with my dad, and my mom was still in the States for about six months. All the schools there are gender segregated, and I was going to an all-girls school for the first time. We had uniforms, and my dad had heard from people what the boys’ uniform was, so he dressed both my brother and me in the boys’ uniform. I showed up to school in grey slacks and a white button-down shirt, and all the girls were wearing these gingham dresses. That story illustrates [that] my father couldn’t totally get into or understand what the experience for a girl or a woman would be like there. Maybe if he had known someone there with a daughter, he would have figured it out.

Later, I went to a school where we had a separate prayer building, with female teachers leading the prayers. Here in the States, there's been kind of a growth in people seeking women’s leadership, religious leadership, but I got to see it there because it was segregated. The women were leading in those segregated spaces in ways that are harder to [make] happen in non-segregated society, and I think people in the U.S. don’t understand when looking at Saudi society that women-only spaces allow women to have control in ways people here don’t realize.

Did you feel pressure in publishing the first Saudi American novel to get it right and do something special with it?

My attitude changed over the years. When I started writing fiction, I was always thinking I wanted to write things that would change people’s minds, educate people, open people’s eyes, and over the years, as I was working on the book, I felt as though there was a bit of a sea change in terms of attitudes toward so-called ethnic literature or non-white literature in the United States, and more and more writers who are saying, “I’m writing for people like me. I’m not necessarily writing a book for a white audience,” sort of a rethinking of who is the audience, who am I writing for?

I went from thinking I have to explain all these nuances to feeling like I am also writing for my friends I grew up with in Saudi Arabia who are half-Saudi, and I’m writing for people in the United States who are Arab American or Muslim American, because even though Saudi culture is different from other Arab cultures in a lot of ways, there are a lot of similarities. There has also been a movement toward not feeling you have to italicize foreign words and not feeling you have to explain everything. The rise of the internet makes it easier for a writer to say, “Well, you can Google that.” That allowed me to feel less pressure.

What has been the reaction of your friends and family to the book?

I talked to my mom, and a bunch of her friends have read it. She has a lot of friends who are American or British women married to Saudis, so, you know, take it with a grain of salt, my mom says they all love it! I think you can get it in Saudi [Arabia] from Amazon, but I don’t think a lot of my relatives have gotten it yet. But I am really excited the book is going to be translated into Arabic by a Lebanese press, so that is a thrill. I am really excited for the characters to speak in their own language in the book. The publisher sent us some sample translation pages, and my dad was helping me make sure Saudiisms are in there, that the Hijazi dialect is accurately portrayed, so that’s pretty fun.

The audiobook is being narrated by an Arabic speaker but with a different dialect, so I spent a couple of hours recording words from the book for her to be sure she pronounced them correctly. I haven’t listened to it yet, but some people I know who have listened to it have enjoyed it. Being able to have those Arabic words in the book being pronounced by an Arabic speaker and [having] the book translated into Arabic are really cool things about the publishing journey.

Where were you with the book when the pandemic hit?

The same week my kids stopped going to school in person was the week I got my book deal. It was pretty crazy. I was over the moon to have sold the book, and at the same time, we were entering into this insane period. At the time, I thought at least the book wasn’t going to be published until next year, and things will be more normal next year, but they weren't. The book came out in January [2021] when [covid-19] cases were spiking. The day the book launched, I was supposed to go to Politics and Prose [in Washington, DC] to sign copies, but they had to close because of a coronavirus case, so I ended up not being able to go until later. I was done writing the book, but of course, there were edits that happened during the pandemic. It took a number of years to write the book, and then it took some time to sell the book. It went through a number of revisions along the way, so I’m hoping the next one will be a little easier to write, but you never know with books.

I’m working on what I’m calling an Arab American Hollywood Novel. I started it a few months ago, and it's been really fun. I’m doing research for it, and I’ve written the beginning of it.

What does that mean, an “Arab American Hollywood Novel”?

That means I don't want to give too much away!

[Editor’s note: Click here to read the Independent’s review of Bride of the Sea.]

Michelle Blanchard Ardillo is a freelance writer and tutor since retiring from teaching English as a result of the pandemic. Her work has been published in HuffPost, Washington Family, Nerdy Book Club, and other places. Follow her on Twitter at @michardillo.