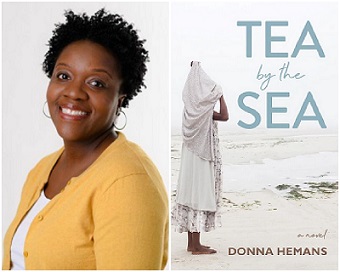 At 15, Plum Valentine is banished from her Brooklyn home and sent back to Jamaica by parents nervous about the pernicious effects of the American lifestyle. Once there, her trust in her parents shattered, she turns to her chemistry teacher, Lenworth Barrett, for solace. Soon, she is pregnant and planning a life with Lenworth.

Hours after the birth, Lenworth steals away from the hospital with their newborn daughter, leaving a terrible absence in Plum’s life. She never gives up searching for her child, and 17 years later, the trail leads her to a church not far from the Brooklyn brownstone where she lives with her husband and twin daughters…

Donna Hemans’ second novel, Tea by the Sea, is a moving portrait of identity, belonging, family, immigration, and the power of maternal love.

Your portrait of the migrant experience is poignant, especially Plum’s. Despite growing up in New York City, she never fully feels at home there, nor back in Jamaica. What irony, then, that it is in Jamaica she gets pregnant at 17. Having to leave her baby behind when returning to the U.S. is a literal depiction of immigration: leaving a part of oneself behind. Can you describe how your own experience with immigration shaped the story?

I finished high school in Jamaica and moved to Brooklyn at 16, primarily to finish my education. So I was roughly the same age as Plum when she leaves Jamaica to return to her parents in Brooklyn. Migrating is generally not an easy thing. It’s unsettling in a lot of ways. Like Plum, I spent a lot of time thinking back on what I had left, the friends who were no longer a quick phone call away, the option of walking outside and picking a handful of fruit, the clear Caribbean waters. I was able to build upon my own sense of loss to create a similar feeling in Plum.

As an immigrant, I also live in dual worlds, and I think most first- and second-generation immigrants experience this duality. For me, I’m always asking the question, “Where is home?” Is home a physical place? Is home a place in your heart and mind? Where and to whom do I belong? This book, and perhaps most of my writing, comes back to that question of belonging, a question that is rooted in my experience of immigration.

Both Plum and Lenworth are determined to exercise agency over their own lives, sometimes to tragic effect. What does agency mean to you, and how does one achieve it?

Every marginalized group — black and brown people, women — has fought for agency and the right to make choices over their own lives. In Tea by the Sea, my primary focus is on a woman’s right to choose the direction of her own life. Lenworth takes that choice away from Plum. Admittedly, he thinks he is offering Plum a chance at building a life free of the burdens of an early pregnancy. But what he thinks is a gift ends up as a shadow on all of their lives. The situation in Tea by the Sea is just one small area. But I think it reflects the outcome in just about any situation where an individual or a group is deprived of the right to make their own choices.

Lenworth is a complicated character. Stealing his newborn daughter is a despicable act, and yet his backstory of thwarted ambition and poverty elicits sympathy for an intelligent man trapped by circumstances (though you do wonder why he keeps on getting into sticky situations with female students). And then he becomes a priest despite a lack of spiritual fervor. What or who inspired him?

Let me give you the backstory of how I came to write Tea by the Sea. I had an idea to write a story about a group of strangers trapped in a church. Soon after, I began writing a short piece about a mother prepping her children for the school day, dropping them off and, instead of going to work, heading to a church and refusing to leave. I didn’t know why she was heading to the church, but I was intrigued.

Sometime later, I was in Jamaica and heard a female caller on a radio program called “Sunday Contact.” Individuals call in to find others they have lost touch with. On that particular evening, a mother called in looking for leads to the whereabouts of her son, then about 8 years old, and the child’s father. The father had taken the boy, and she had no idea where they had gone.

Once I heard that woman’s plight, I knew the woman in the church was there to retrieve her child. From there, I had to build the story of how Lenworth came to be in America with the child. Beyond the larger questions of agency and belonging, there were two other questions I wanted the book to explore: Who has the right to raise a child? How far will a mother go to retrieve her child?

With Lenworth’s character specifically, I know a good number of individuals with similarly thwarted ambitions. Lenworth wanted to be an engineer, and due to family circumstances and his own actions, he wasn’t able to pursue his studies. But Lenworth’s character was inspired by an experience totally unrelated to ambition and thwarted opportunities.

Once, when I was still in college and living with my aunt in Brooklyn, I happened to answer the phone when one of my aunt’s friends called. The caller, a man, proceeded to ask what I was studying. I had majored in English and media studies. He didn’t like what I had chosen to study and quite angrily told me I should not be studying the humanities. Of course, I was stunned by the conversation and the idea that a stranger thought he had the right to determine what I studied or what career I ultimately chose.

I can laugh about the entire conversation now, and how hard I tried not to be rude. But his point was based on the idea that the single end goal of education is not studying or working in a field you love, but making money to survive. And that is what Lenworth ultimately does. He sets aside his dream to find a way to survive.

I recently read another book based in Jamaica, A Tall History of Sugar by Curdella Forbes, and Marlon James is a giant of the Jamaican literary scene. Do you see a growing interest in Jamaican literature?

For too long, the stories we were “allowed” to write or the stories the market seemed to be interested in publishing were about colonialism and its effects, the new immigrant in her new adopted country or escape from poverty. And for a long while, the message from publishers and agents was, “I don’t know how to sell it.”

But Marlon James’ fantasy novel, Black Leopard, Red Wolf, which draws on African history and mythology, is yet another shift in the types of stories coming from the Jamaican diaspora. I’m excited by the growing body of work from Jamaican writers and am looking forward to seeing the creativity in what we continue to write and publish.

If you were to have your fantasy “tea by the sea,” where would it be, with whom, and what would be served?

Any beach on the north coast of Jamaica would be ideal. What I picture is a late evening on a patio overlooking the water, and tea served with warm sweet-potato pudding or guava or plantain tarts or some other fruit-filled pastry. Ideally, it would be quiet, with just the gentle shush of the waves lapping against the shore. I would be quite content to sit quietly by myself for that tea by the sea. But since it’s a fantasy, I would love to sit down with my grandparents and ask all the questions I didn’t know to ask when they were alive. They also worked hard, and in their time, sitting down for tea by the sea was a luxury not afforded to them. So I’d want to give them a moment to sit back and enjoy.

What is it like publishing a book during a pandemic? Have your plans changed?

Oh, yes, my launch plans have changed significantly. While some of the events I had lined up have been canceled, some are now virtual. Understandably, not all venues have been able to pivot to virtual events or accommodate all the in-store events they had planned before the lockdown. But we’re all learning and adapting as best we can.

One of the good things, though, is that writers have banded together to help each other through the challenges of publishing in a pandemic. For example, I’m part of a group of authors with 2020 books called Lockdown Literature. The group was the brainchild of author Mary South (You Will Never Be Forgotten), who wanted to create a support group for authors publishing in this crisis.

And I’m amazed at what the group has been able to pull together: readings, a giveaway, an Instagram page featuring videos of authors reading snippets of their books, and events. We’re all trying to find new ways to reach our readers, and I’m grateful for the communities of writers and artists that have formed because of the coronavirus crisis.

Vanessa Becknell does a Q&A with Hector Tobar for The Barbarian Nurseries.