An Interview with Rilla Askew

The novelist talks complex characters, Tudor England, and what Hilary Mantel meant to her. 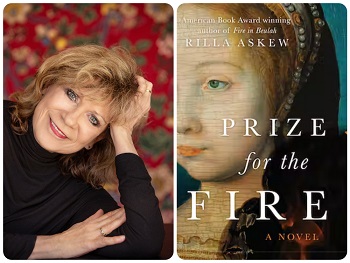 Rilla Askew is the author of five novels, a book of short stories, and a collection of linked essays. Her first novel, The Mercy Seat, was a finalist for the PEN/Faulkner Award. Born in southeastern Oklahoma, she wrote the seminal novel about the 1921 Tulsa Race Massacre, Fire in Beulah, which won the American Book Award. Here, we discuss her latest novel, Prize for the Fire.

I’ve just finished this astonishing book, and I’m dazed at your mastery of Henry VIII’s cruel and unstable era. Can you talk about the weight of every decision — marriage, worship, friendship — and its consequences?

To navigate the complex worlds of Tudor England, one had to strategize relentlessly, and the ramifications for miscalculation could be devastating — especially for women. For the novelist, this provides an abundance of plot possibilities, as Hilary Mantel’s Cromwell trilogy surely demonstrates. In Prize for the Fire, the ramifications aren’t only in the eyes of Henry’s court but also the church, the religious and social hierarchy, [and Anne Askew’s] own male relatives.

This is a novel about men undone by your main character’s sheer willfulness. Anne Askew is forced to marry her dead sister’s betrothed, who rapes and beats her before she escapes. Fifty pages in, her brother asks her why she can’t just submit. Therein lies the book’s refrain.

Exactly. This is what Anne was known for — her defiance of the forces that tried to control her. It’s why she’s a feminist icon as well as a religious one: She was a writer, she sought a divorce, took back her own name, moved to London to join a community of likeminded believers. When she stood trial, she snapped back at her accusers with intelligence, scriptural knowledge, and sass — totally unacceptable behavior.

What was it like to read Anne Askew’s own words and visit where your possible ancestor lived and suffered?

We share the name, but I’ve not been able to trace it genealogically, so I don’t claim to be her descendant. As for reading her words, I’m grateful they were preserved. Too few women’s writings of that era have come down to us. Her writings are in Henrician language, so it took many tries to keep the flavor and still make her voice accessible. I was awed, visiting the places of her life and death. At Smithfield, there’s a small park in the center of a traffic circle, automobiles whisking every direction, no plaque for her specifically — so many were executed there — but on a hot July day 472 years after her burning, I felt her.

Anne is determined “to study her way to God’s mind.” Her close reading of the Bible reminded me of how we train students to read a text, except that her humanist interpretation goes against the laws of her time. (Tyndale was killed for translating the Bible!) How much did you identify with her as a writer, delivering truths that might be taken to task by so-called authorities?

My biggest writing challenge has been evoking the absolute religious saturation of hers. Anne’s writings are all about points of doctrine, Scripture, and faith. This is what she was on trial for; it’s who she was. It’s not who I am, as a writer or individual, but I had to write from her heart space, not mine. I could have made her a heroic Wonder Woman-type character, which would have spoken more popularly to our era but wouldn’t have been true to hers. In this sense, I do identify with her decision to speak truth to power as she understood it.

You tackled the terror of the Tulsa Race Massacre in Fire in Beulah, and in Kind of Kin, you took on Christians who are dead set against immigrants in their community. How does this book fit in with your body of work?

In many ways, it’s the same challenge: how to write to a certain era and culture in ways that feel truthful to me. I wrote honestly — some say brutally — about white anti-Black racism in Fire in Beulah, knowing that if I wrote the main character as a white savior instead, the book would be more widely popular. In Kind of Kin, I evoke a small-town, white evangelicalism that’s complex, contradictory, not heroic at all, but it’s also not demonized or dismissed. These are the people I come from, and their contradictions are authentic to me. It’s always about writing the truth as I see it, whether that speaks to the zeitgeist or not.

You mentioned Hilary Mantel earlier. Can you tell us what she meant to you?

Oh, I’m devastated at her passing. She taught me (as she surely taught other historical novelists) that one can remain faithful to the historical record and still pull contemporary readers sweepingly into that world. In 2018, she sent me a beautiful note about Fire in Beulah: “It has enlightened me, taught me, and filled me with admiration for the talent that created it. I could no more write that book than I could fly. Where I am, almost at the end of my trilogy, it’s hard for me to fall into someone else’s imaginative world; I resist it even on the brink, as if I have to save my emotional energy. But I couldn’t resist this: the awesome power of your storytelling took hold of me within a page.”

In July, I sent her the ARC of Prize for the Fire. She wrote back saying that she couldn’t think of a better subject (Anne Askew), or a better author to tackle it. She closed with: “I might be slow to come back to you, because we are preparing to move to Ireland - September, if all goes well. But I look forward to it immensely. Love, Hilary.” That I’ll never know whether she read it is an additional heartache. That she gave us all so much with her incomparable body of work is a miraculous gift.

Mary Kay Zuravleff is the author of the novel American Ending, coming in June 2023 from Blair Publishing. Her three earlier novels are Man Alive!, The Bowl Is Already Broken, and The Frequency of Souls. Zuravleff is also a founder of NoveltyDC, which offers manuscript consultations and private coaching.

William McPherson is a quintessential man of letters. He founded The Washington Post’s “Book World” and won a Pulitzer Prize in 1977 for literary criticism. Then he swung around to the other side of the desk to write two beautiful and well received novels, Testing the Current (1984) and To the Sargasso Sea (1987).