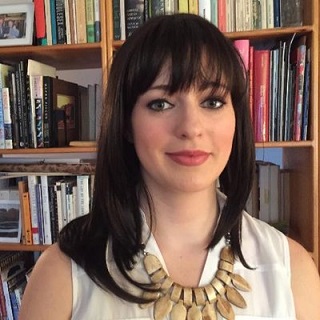 In A Simple Favor, Darcey Bell’s debut novel, moms Stephanie and Emily meet on the playground of their children’s school and strike up a friendship. But initial kindnesses soon fade as their families succumb to a series of awful events.

How do you like the book cover? It’s so scary.

The book cover is great! I think it really helps convey how tantalizing it is to look into the life someone else is living…but also how dangerous and terrifying it is to do so.

One of your main characters, Stephanie, is a blogger whose writing voice becomes less reliable over time. Will A Simple Favor start a movement to make readers distrust bloggers?

I wasn’t interested in starting a movement when I wrote the book, but I did want to create more suspense by showing how much of a performance having a blog — or any social-media presence, for that matter — can be. Stephanie, the mom blogger, and Stephanie, the best friend and lonely widow, are two very different people. I wanted to build and expose the tension not only between Stephanie, Emily, and Sean, but also between Stephanie and herself.

Loneliness is a far more powerful force than most people realize, an odd catalyst. What do you think?

Certainly! It is a powerful force — and I think books have always done a great job of showing us what loneliness can make people do. Of course, books are also great comfort against loneliness, too.

Do you believe there may be something a little sinister lurking below the surface of ordinary folk?

Maybe not always sinister, but I think everyone has something hidden or unknown. We live in a world that makes it seem like we can know anyone by typing names into Google and stalking social-media pages. No one is ever transparent — some are just better at hiding parts of themselves than others!

Is Emily, your other main character, a new take on an old evil? Why was she compelling to you?

Edgar Allan Poe wrote this story, “The Imp of the Perverse,” about this imp-demon that stands in for our impulse to do the wrong thing in a situation simply because it is the wrong thing to do. I’ve been haunted/obsessed by this idea (and Edgar Allan Poe in general!) since I read it. Emily was so compelling to me because she learned how to use the pleasure in this impulse to gain power — and look good doing it. But I also think her love for her son makes her more complicated than any old devil.

How do you time the ideas in a story? When to let something slip?

Timing is so important for creating suspense. You can’t give away the big secret in the first five pages, but you also can’t leave the reader totally in the dark until the final revealing moment. You have to drop crumbs along that way that smell a little fishy…I’m obsessed with Patricia Highsmith (as you know, she makes some appearances in my novel!), and I learned a lot from reading her work. I think it’s in The Talented Mr. Ripley where she writes, “Anticipation was more pleasant...than the experiencing.” The thrill in anticipation is a big part of writing suspense for me.

Is there anything about this story that exists in your reality?

Sort of! As a preschool teacher, I spend a lot of time talking with moms with young children who are often lonely, fiercely protective, and loving parents. To be honest, a lot of the mothers I meet are at least a little like Stephanie. Maybe every mother is, but some know how to hide it better than others! But no sapphire rings or cabins for me...

A Simple Favor is told mostly from the perspectives of Stephanie and Emily, neither of whom necessarily inspires trust. Who would you be most inclined to trust, and why?

I think you’ll have to read the book to find out!

It’s funny that we still haven’t finished grappling with the issue of stay-at-home vs. working moms. I like “Captain Mom.” Did you coin this usage? I guess we all want to be captain of something.

We do! Of course, we are still trying to figure out how to “have it all” and looking for models for how to be superwomen and supermoms. I think it’s natural to look to other women and mothers for guidance. But appearances are never what they seem…though they can certainly lead to some interesting stories!

Vanessa Becknell does a Q&A with Joyce Carol Oates about her book The Corn Maiden and Other Nightmares.