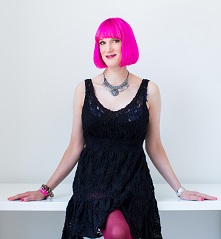 Fresh off a Nebula win for her novel All the Birds in the Sky, Charlie Jane Anders’ follow-up, The City in the Middle of the Night, is a change of pace. Where All the Birds was bright and full of humor and ignored the line between fantasy and hard science fiction, The City is firmly interstellar science fiction, set in the far future on a distant exoplanet called January.

In the latter novel, Anders weaves together two disparate narratives: the first-person perspective of introverted Sophie, who lives in the authoritarian city of Xiosphant, and the tough-as-nails smuggler Mouth, who hails from the crime-ridden, hedonistic city of Argelo. The planet is a harsh environment, with one side always day, the other always night, and seething with alien creatures. Humanity survives in a narrow strip between the two extremes.

The story is reminiscent of Ursula K. Le Guin and Octavia Butler, and runs the gamut from intimate bildungsroman to thrilling survival narrative. Anders recently chatted with me about the intricate worldbuilding that went into The City in the Middle of the Night.

The "crocodiles"(Gelet) are true "starfish" aliens (i.e., driven by inscrutable agendas). They remind me of the Hosts/Arieki in China Miéville’s Embassytown and Butler’s Oankali in her Lilith’s Brood series. What influences did you use to create them?

You already named my biggest influence, which was Butler's Xenogenesis series. Those books had a huge impact on me and totally shaped how I thought about contact with aliens. I think I was also heavily influenced by Ted Chiang's “Story of Your Life” and the movie made from it, “Arrival” (though “Arrival” came out when I was mostly finished writing this novel). Also, I think getting to talk to [artist] Wayne Barlowe and looking at a ton of his drawings of weird creatures had an undeniable impact on me.

January is a "tidally locked planet" where people live in a narrow strip of twilight between a perpetual burning day and a freezing night. The planet is host to a variety of fauna that the colonists either ignore or outright dismiss. Are the harsh conditions the sole reason why humanity has given up its curiosity?

Most of the human science and technology on January are super-focused on survival and on maintaining the level of technology that humans currently have, versus trying to make any new breakthroughs or discoveries. Once humans lost all of our survival gear, including all-terrain vehicles and survival suits, we were no longer as able to explore the night, and most expeditions there ended really badly for all concerned. That said, some drafts of this novel did include more scientist characters…[but] those were mostly cut for length and because they didn't really add to Sophie's story.

Both Mouth and Sophie are bound together by their individual trauma. While Mouth is a woman of action, she is intensely secretive about her past. Sophie, on the other hand, is a straight-up introvert. Why did you choose such untraditional perspectives as narrators?

You kind of hit on it...I didn't want to write about the same protagonists I had written about previously. I feel like a lot of my protagonists (and a lot of other authors’ protagonists) are kind of outgoing, extroverted, brash, and vocal problem-solvers who become the center of attention effortlessly. And, along with having less humor in the narration of this book than in All the Birds in the Sky, I wanted to explore a narrative voice that was different than what I'd previously tackled.

I loved the idea of someone like Sophie, who's shy and introverted and somewhat withdrawn, but who still becomes the hero of this story and shapes the world through her choices. And then Mouth kind of starts out as an archetypal badass smuggler who has racked up a huge body count over the course of her adventures, but as I was writing her, it quickly became obvious that she had a neurotic, anxious side that she keeps hidden from everybody, including herself.

I want to keep challenging myself as an author and trying to write characters who are radically different from the ones I've tackled before, which is tough because most of us have a few default archetypes that we return to again and again.

Sophie says: “I realize that human civilization is based on forgetting…I don’t know if our power to forget makes humans stronger, more self-destructive, or maybe both.” What is your take on this philosophy?

That's a hugely important thing in the book to me. When I was thinking about writing about a tidally locked planet, I became obsessed with the problem of sleep — but also the question of the passage of time, which is hard to keep track of on a planet where the sun doesn't rise or set. So how do people know how much time has passed? This led to all sorts of stuff about the nature of memory and how we think of the recent past vs. the distant past. And that, in turn, seamlessly led to thinking about the weight of history and why so many people want to distort or partially erase the past. And then, of course, that flows into the weird way the Gelet communicate, which came out of thinking about the extreme environment they live in.

You founded and ran the influential science fiction and fantasy blog i09 for a number of years. What trends in speculative fiction did you notice during your tenure?

There have been so many interesting trends. The most important has been the opening out of speculative fiction to encompass all of the voices that had been excluded and suppressed in the past, which has led to much richer storytelling because, at last, we can write all those stories about "what it means to be human" without leaving out most of the human species from that conversation. But also, there's been a huge rise in stories from the point of view of robots and artificial intelligences, including Westworld, Ex Machina, Terminator: The Sarah Connor Chronicles, The Murderbot Diaries, Autonomous, and tons of others. And there's been a super-welcome new focus on hope and finding ways to inspire people to keep fighting for a better future.

[Photo by Sarah Deragon, Portraits to the People.]

Craig Laurance Gidney the author of the collections Sea, Swallow Me & Other Stories and Skin Deep Magic, the YA novel Bereft, and The Nectar of Nightmares. He lives in his native Washington, DC. His new novel, A Spectral Hue, comes out this June.

An Interview with Peter Bergen

The journalist and terrorism expert discusses his latest book, United States of Jihad.