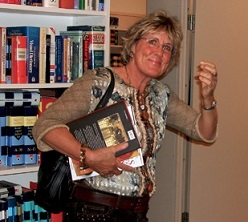 Swedish author Catharina Ingelman-Sundberg has written across many genres, including popular science, cartoons, and children’s books, and she was awarded the prestigious Widding Prize for a trilogy of historical novels centered on Viking culture. Her latest novel, The Little Old Lady Who Broke All the Rules, the first in a series about the rollicking criminal career of a gang of pensioners, has just been published in the U.S.

You’ve had a fascinating career so far, as an accomplished marine archeologist and journalist, as well as the writer of acclaimed historical novels. Why did you decide to write about a spirited group of senior citizens who come to believe that “a crime a day keeps the doctor away”?

I got so angry when I saw the cut-downs in Sweden´s welfare system and how society has affected elderly homes and the old people. The generation that once made Sweden a great country to live in is nowadays treated very badly. Worse than prisoners. That´s when I decided to write a critical but fun book about the problem. If it was funny, more people would read it, I thought. I aimed at adult women and men when writing it and was surprised when so many young people liked it, as well. But I have happy grandmas telling me that finally their 11- to 13-year-old grandchildren read a book, and they love it. And a lot of girls do, as well.

One of the reasons the “League of Pensioners” in your book begin their life of crime is that they want to get into prison, because they believe prisoners are treated better than they are treated in their managed-care home. Was that a social issue when you began writing the book? Have conditions changed?

It had not become the social issue yet at the time, but it became the issue 11 months after I started to write the book and delivered it to the editing house. Unfortunately, conditions have not improved; they are worse, I think. But the issue is very much debated.

There have been other works about old people who deliberately commit a major crime, but they usually involve just one. Your League of Pensioners keeps going! Was that the plan when you started the book?

Yes, it was. My aim was to write a book for men and women of all ages (the kids were an unexpected bonus). And having been an expedition leader in marine archaeology for several years, I have experienced many different personalities. So I thought it over and chose five characteristic ones that we have in society and made them the Gerry Gang.

Martha, the “little old lady,” has continued her criminal career, with two more books published in English, which may get to the United States sometime soon. Is the little old lady still going? Do you have more books in the works starring Martha?

The second book is already on its way to United States and hopefully the third one will follow. At the moment, I am happy with three books in the series as I want to keep very high quality in each book — but you never know with life, and many readers want me to continue with Martha and the gang.

In a piece on Bookish, you talked about all the rules you break when you write, and one of those rules is about mapping out the book before you start. Do you just let Martha take you where she wants to go? Are the “Little Old Lady” books as much fun to write as they are to read?

I find that my books are more fun to write and become much better if I don`t have a detailed synopsis! The last book in the series, I just sketched in two lines for my publisher. She nodded her head to the idea, and off I went. That has been the funniest book I have ever written. And, yes, I must be one of the happiest writers in the world because I laugh aloud at so many things I write in the books. As a disciplined author, I read the text I have written out loud the next day to discover if I have made some mistakes and see if I can improve the language. But often I have to stop because I giggle so much.

Do you have other projects in the works now?

Yes, I have started a new project with other people than Martha and the gang. It is a feel-good book, as well, a serious subject but with a lot of fun in it. Just in the prologue, I have smiled and laughed out loud. It feels promising…