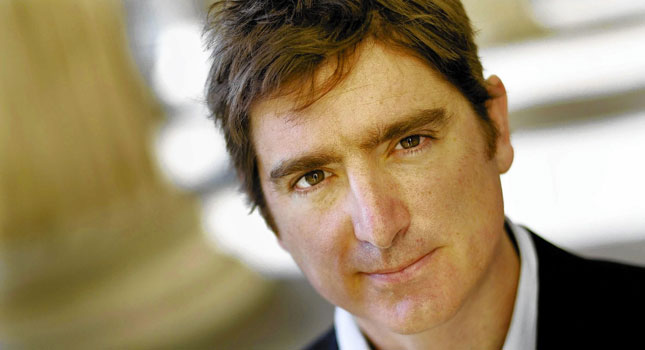 In Marcel Theroux’s Strange Bodies, Nicholas Slopen came back from the dead. Or at least thought he did. He awakened in a locked ward of a notorious psychiatric hospital trying to piece his life back together again. What happened? Here, author, broadcaster, and filmmaker Theroux discusses his latest novel, memory, and the power of words.

How do you combine three careers and how do they feed, help, or get in the way of one another?

I’m not sure anything I do counts as a career. I’m doing my best to keep writing and pay my mortgage. I’m lucky to find my work interesting. I feel very fortunate to make documentaries and do journalism as well as write. One thing I’m grateful for is that my books are not just made out of other books, they’re made out of things that I was able to experience because of my other work: reindeer herders in northern Siberia; the interior of the destroyed reactor at Chernobyl; the president of Azerbaijan doing a loud and unremarked-on fart.

Do you think that, as happens in Strange Bodies, anyone is being “Steinached” [undergoing a drastic youth-preserving surgery] today? Might a facelift be similar in expectation and outcome?

There’s an important difference. A facelift just deals with your outward appearance and the way you are perceived. It’s like reupholstering a couch. The Steinach was supposed to rejuvenate and invigorate you. And while I don’t think anyone is still undergoing the Steinach, people are pursuing all kinds of equally odd routes to extended youth. It’s the oldest wish — eternal youth. The Steinach operation — a kind of vasectomy — is very similar to ideas of conserving jing in the millennia-old tradition of Taoist alchemy.

You never really detail
the operation that the main character undergoes. Are you leaving it to our
imaginations? Will you describe it to our readers?


In an earlier draft, I described exactly how it was carried out, but the
publishers were nervous of the litigation that would result if people were
inspired to try the Malevin Procedure on themselves, or, God forbid, strangers.
I think, on balance, that they’re right and the world is safer without this
knowledge.

How does it feel to be
the “belated product of 19th-century testicles?” Do you think of it
is a kind of malaise or fatigue?

I’m the product of mid-20th century testicles, so I can’t speak from
personal experience. I imagine it results in a combination of general lassitude
and a tendency to use words like “wainscot.”

Your explanation of
depression is wonderful — “Overinvesting in alien misery.” With such an apt and
succinct description, can you take a stab at an equally apt treatment?

Gosh, I hate to sound po-faced, but I don’t want to seem cavalier about
mental illness.

“We can’t get there in
words because the job of words is to construct the fiction of our separate
identity.” I’ve always wondered if language isn’t the price of memory. In order
to speak, we must forget. Would you agree or disagree, and why?


I’ve had this conversation with a few people. The book makes a case for
memory being made out of words. People have insisted to me that much of their
recalled experience is non-verbal. I can certainly close my eyes and “see” things that I’ve
experienced without any words getting in the way. But I do think that in an
important way our ideas of ourselves are constructed out of words and stories. So
I think, yes, maybe having language is the price of having memories.

Who does want to spend
time with lunatics?


See my answer to the question about overinvesting in alien misery, above.

“The unutterable
sadness of a finite life on a beautiful planet.” Makes one want to tamper with
death, doesn’t it?

Yes, it does. The wish to cheat death is completely understandable. But
that’s different from thinking that it’s a good idea.

In what genre would you
place Strange Bodies (if you must)?

Q&A About Love With Rachel Machacek

A Q&A with the author of The Science of Single: One Woman's Grand Experiment in Modern Dating, Creating Chemistry and Finding Love