An Interview with Andrea Pitzer

The journalist talks Icebound, polar bears, and the utter darkness of Arctic nights. 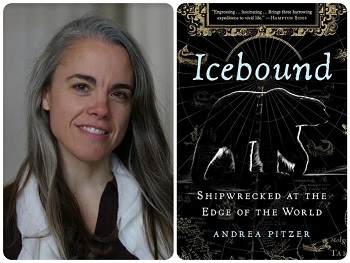 In her writing, journalist/author Andrea Pitzer seeks to “unearth lost history.” Her most recent work, Icebound: Shipwrecked at the Edge of the World, which chronicles the three Arctic voyages of 16th-century Dutch navigator William Barents, expertly does just that. Pitzer discusses the new book here.

Your books cover a wide range of subjects. What’s the link between The Secret History of Vladimir Nabokov, One Long Night, and Icebound?

I really do think of them as the Zembla trilogy. Nabokov was the genesis of all three books. In his Pale Fire, there’s a madman who believes himself to be the exiled king of Zembla. I found that Nova Zembla had been written about as the worst site of the gulag. And part of my first book led me to look at pre-Nazi, pre-Holocaust camp systems. I thought it was so important, I decided to write a whole book about it. Then, in that search for the king of Zembla, I also found the story of William Barents. It’s not that it isn’t known. In the Netherlands, he’s a national hero. But I felt it was a missing piece of historical literature in America. The events were so dramatic that I just kept returning to it.

An extraordinary amount of research went into Icebound, yet the narrative feels so immediate.

What’s dramatic is the day-to-day survival. Who’s going to make it to the next day? And if they think of trying to get home with the ship frozen in, how is that even possible? I wanted to recapture a little of what that was like.

But you don’t indulge in imagining their emotions.

A couple of critics have been critical of that. It was something I chose deliberately.

Last year, you went on expeditions to the Arctic. I thought you might interweave them into the narrative, but you only talk about them in the final chapter.

I used those three expeditions to try to capture [the explorers’] feelings. I was in parts of the world that they were the first to map for five different calendar months. I could look and see the same places. I could go up the mast. My second expedition was on a tall ship, and I just sat up on the mast and looked at the shores that they were the first to record and map and thought about what it would have been like. My goal was never to make things up.

You talk about the many languages of water…

Which, I think, is the Arctic in its essence! That’s what you live inside. I saw what the ice was like when it’s freezing, when it’s getting towards winter, what it’s like in high summer. What it sounds like. I wanted to be able to communicate that.

The explorers in Icebound set out as plunderers and aggressors. They certainly had the starch knocked out of them by the end, but they were pretty brutal.

They went out as agents of empire. It was important to me not to lionize them — not to demonize them, but to lay out what they represented as they set forth and what they had to endure to try to get home.

You start by recounting what they didn’t know. For instance, they thought the North Pole might be warm.

They knew in summer that part of the globe would be in daylight all the time. So, it was a little bit logical. It was completely wrong and would be a mistake. They’d live the terrible consequences.

From the outside, it was smaller, but from the inside, it was bigger. There were 17 of them. I paced it off with my feet and imagined they had to have a fireplace, they had all their stuff stored, their beds. The guns, we knew, were by the front door. It got smaller quite quickly as I imagined all the things that were inside.

They had seen trained bears on the streets of Amsterdam. When they see their first polar bear, they learn very quickly that you’re not going to have a pet polar bear. It’s this awful moment when they realize their vision of what they thought was going to happen is not going to be how this is going to go. There’s more than one instance in which they go from catastrophe to emergency and have to deal with more than one thing at once. Every minute of every day, they were trying to survive.

What struck you, seeing a replica of the ship?

How small it was: about 60 feet. On my third expedition, we went on a boat almost exactly the same length as Barents’ ship. We were out for a month, and there were only 10 of us. I loved the people I traveled with, but it was crowded. And imagining almost twice as many people for week after week…

It must have taken every bit of strength and mental fortitude to keep a sense of time, in addition to enduring the lack of sun.

It’s hard for us to imagine this wasn’t just like going to a remote place today. They were off any map that had been made. No one would have known how to find them. By the time they were stranded, they were getting close to polar night. On my second expedition, I went dogsledding in polar night to see what it was like. You sometimes have moonlight, but when you don’t, it’s really dark. If there’s a little light when there’s snow and ice everywhere, it reflects up, and you have reasonable visibility. Not enough to protect you against polar bears, who are quite good predators. It’s a level of endurance that’s hard to imagine.

I just think, “What book could I write, either that nobody else could write or nobody else is willing to write?” I met one other person who knows the [explorers’] diaries very well and has been there. A handful of people in the world have done that, but there was nothing in English. It really helped that scholars were generous. I went to the Rijksmuseum [in Amsterdam] twice, and on the second visit, the curator took me to a depot and into the storage unit and I could physically handle their tools.

These little woven buttons and little designed buttons made them very human to me. The shoes, too, how much personality is in worn shoes that have been under ice for centuries before being discovered. How much of their life was in these artifacts. Their clock was like a bell clock. You could see all the little gears. These were modern people in a lot of ways, and their interests were not that different from ours.

I think it will be a memoir of a really rough childhood and learning to be in the world with all the joy that it encompasses — including my plan to go back to the Arctic with the same crew. I think people live in really small worlds sometimes when they don’t have to. I want to encourage them to follow their own passion.

Everyone has heard of minimum and maximum security prisons, what about medium crazy facility? Robert Boswell's Tumbledown takes place in the odd world of "medium crazy."