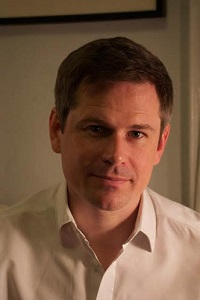 Your depiction of China and its people in The Dog is very genuine. Were one to take your name away, the reader might assume the stories were written by a Chinese author, not an American one. How much time did you spend in China and what did you learn there?

I appreciate your saying the depiction is genuine. I haven’t been to China since the mid-1990s, when I was a student there and then did some traveling. My understanding of the place has changed over time — and China has changed. It seems to me that every writer creates a version of the world that is specific to his or her experience. My experience of Beijing would not be not your experience of Beijing; my Washington isn’t yours, and so on. And when we sit down to read, it’s the friction between our expectations as readers and what the writer is actually telling us that draws us into the book. So, I have my version of China, and the best answer to your question about what I learned there is the book itself.

Your writing style is deceivingly simple. The language is straightforward yet evocative. The characters are drawn with minimal brushstrokes, yet their stories are compelling and their emotions boil over from page to page. Tell us about how you approached these stories and how you endowed them with so much life.

There’s usually a question at the center of a story that’s driving me to write it. Some character has done something I don’t understand, and I’m trying to puzzle it out. Because the people in this book happen to live in China, and I’m not writing for a Chinese audience, I might have taken some extra care to be clear in my explanations of the external forces that act on the characters, and I’m sure that had some influence over the complexity of the sentences. But I also think that’s just the way I write short stories. I’m usually looking for the most concise way to convey meaning.

There are multiple layers of conflict in your stories. In “Donate!” for example, Yang is in conflict with his wife, his daughter, his business partner, and, ultimately, himself. Throughout all of this, he seems passive (perhaps passive-aggressive), as does Chen Wei in “The Dog,” and the conflicts never seem to get resolved. What is it about these types of characters that interests you?

The simplest explanation for all the conflict is that the narrative requires it; characters in conflict with other characters, or themselves, are naturally more interesting to read about. If we start reading a story and the protagonist is leading a blissful, carefree life, we can be sure everything’s about to go sideways for him. That’s an expectation we have of the form. More specifically, I think what you’re pointing to in Chen Wei and Yang is a thread running through all the stories: An outside force introduces chaos into the protagonist’s life. That force might be an earthquake, or a government decree, or a theft, or a firing.

My intention is not to use the story to find a solution to that chaos, but to illuminate the inevitable conflicts that arise, because they’re what make us human. I guess it’s a function of my perception of the world. We are constantly acted upon by forces over which we have no control. We are essentially powerless. We go to great lengths to protect ourselves and convince ourselves that we are in control, but that doesn’t mean we are. Though I don’t sit down to write stories with the intention of indoctrinating readers with any particular worldview, it’s probably inevitable that the characters in my stories will exist in a fictional world that’s a projection of my beliefs.

You attended the Iowa Writers’ Workshop. How did that
experience impact you, and what advice would you offer to those considering an
MFA program?

I was very lucky — the workshop was exactly what I needed when I needed it. It’s like going to wall-building school. The teachers show you how to mix the mortar and stack the bricks, or choose the best stones from the riverbed, and all day, every day you talk to your friends about walls, critique walls they’ve built, argue about the best trowel to use, and you go to the bar and say things like, “Well, the Great Wall’s a tremendous accomplishment, but it’s a little long.” And then you go home and work on your own wall. After two years, you should be able to build a pretty solid wall. But they can’t teach you how to make your own Merzwall or turn you into Andy Goldsworthy. That was my experience at Iowa — the focus was on craft, as it should be. “Here are the basics,” they said. “Do what you can with them.” I don’t know if I have any advice to give to someone looking at a writing program, except to be clear-eyed about what you’re getting into.

Tell us about your writing habits. Do you have a set schedule?
How do you approach a new piece of work? What do you do when you get stuck?

I usually try to get up between 4 and 5, which gives me a couple of hours to work uninterrupted before my younger daughter, who is 2, gets up. I have a full-time job, which, in a way, is good for the writing because it puts me on a deadline every morning — if I don’t get up and sit at the desk, the writing doesn’t get done for the day. Most weekends, I get a decent amount of work done. When I’m starting something new, I’ll write a draft, or most of a draft, in longhand, and then I’ll type it up and see what I’ve got. From then on out, it’s mostly typing. Being stuck is a perpetual state. I’m always leaning against a door that won’t open, and when it pops, there’s another one right behind it. But that’s how you know you’re onto good stuff, I think. You have to work for it a little bit.

Who are you favorite authors and how have they influenced you? Are there any Chinese authors who have had an influence?

Lines from Tobias Wolff’s work — the cadences and the gnomic constructions of his sentences — have been in my head since I was a teenager. I’m in awe of James Salter. I’m a huge fan of Ha Jin’s work, but I read him because he’s a great writer, not because of where he’s from, if that makes sense. The stories in The Bridegroom are masterpieces. The dramatic sensibility is Shakespearean — I have trouble wrapping my head around how perfect some of them are. If Chinese writers have influenced me, it’s been by way of my own fear of replicating work they’ve done better. Chen Ruoxi’s Execution of Mayor Yin. Ma Jian’s Stick out Your Tongue.

I read somewhere that you are at work on a novel. Can you tell us a little about what we can expect?


I’m working on something set in New York in the 1970s, but
that’s about all I can say at this point. It’s in process.

[Note: Jack Livings will appear in conversation with the Washington Post’s Adam Kushner at Politics and Prose in Washington, DC, on Tuesday, Aug. 12, at 7 p.m.]

Mike Maggio is a
novelist, poet, and short-story writer whose latest novel,
The Wizard and the White House, is due out in October
from Little Feather Books.