Is the question really about who deserves to write what? 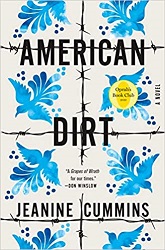 To be honest, I didn’t want to write about American Dirt. I don’t plan on reading the book anytime soon, given the pile of books waiting on my nightstand. And, besides, many (many) other writers have written passionate, thoughtful criticisms about Jeanine Cummins’ new novel. I have friends who detest the book, some who admire it, and, like many of these contemporary debates, there’s no middle ground.

And, in many cases (perhaps this is one), there shouldn’t be.

So this column isn’t a critique of the book, but rather a response to an argument about it. The debate over American Dirt has touched on something that’s recently been on my mind, and that’s the concept of representation, of who has the right to tell a story. It’s been somewhat spectacular to see the panicked, hand-wrung rebuttal to the arguments about representation. As Mitch Albom recently wrote in his Detroit Free-Press column:

At the core of the firestorm is the fact that Cummins is white (although she has been mentioning lately that one of her grandmothers was Puerto Rican). This has engendered a second level of criticism, not about her characters or language, but whether Cummins should have written it at all.

“When writing about a community to which one does not belong, authors have an obligation to think about the social and cultural politics of what they are doing." That is what Domino Perez, a professor of English at the University of Texas at Austin's Center for Mexican American Studies, told the BBC. "Asking whether or not you are the right person to tell a story,” he added, “means that sometimes the answer is no."

…But when we start telling people not to write at all if they “don’t belong” to a community, you’re stepping on a dangerous live wire, one that could sizzle into less understanding between us, not more.

Strictly applied, that sentiment would erase an awful lot of books…

And Albom goes on to list famous books written by writers with characters outside of their gender, race, or experiences, and worries about the overall effect of writers not being allowed to tell certain stories.

You’ll notice, in my excerpt and if you read his entire column, the leap Albom takes when he alters Perez’s statement “that sometimes the answer is no” to simply “the answer is no,” a leap that is sloppy and convenient and not what Perez said.

Of course writers can write books or characters outside of their experiences. Perez didn’t say they couldn’t, and that really wouldn’t be possible. I’d run out of characters fast if I had to make all of them half-American and half-Panamanian men in their mid-forties. And it’d be a shitty book because I’m not that interesting.

There are, as Albom lists, wonderful books written outside of the #ownvoices movement, a movement that expressly does not prohibit writers from engaging in other perspectives. Writers are, in a sense, similar to actors, and we are always struggling to ensure we play a role well.

If we don’t, as Albom states in his column, we have every right to be called out on it. And that’s what’s happening to Cummins from critics who have read her work. She absolutely had the right to write this story. But she had to earn the right, through research and skilled writing, to tell the story well. And the argument is that she didn’t.

This right to tell a story reminds me, and not that tangentially, about the debate regarding the N word, and whether or not anyone has the allowance to use it. And when that debate arises — as often does, particularly among writers who aren’t black — I send people to this lovely short clip of Ta-Nehisi Coates addressing that question. Take three or four minutes to watch it. It’s worth it. I’ll wait.

And art is a form of ownership; chillingly, it has the potential to be a timeless form. We create characters and invest them with qualities to make them believable. Those qualities are taken from our experiences or imagination and become representative of a world we want you to believe.

To that end, we run the great risk of employing falsehoods. Some writers avoid those missteps, and their books are celebrated. But we’re learning that some of those celebrations, particularly as the voices of marginalized writers grow in power, have been undeserved.

You certainly have the right to try to speak outside of your experience, and I do believe that desire occasionally comes from an altruistic urge to share important stories. But you don’t have the guarantee of success, and you’re not owed a reward for trying, especially if your effort plays into harmful stereotypes.

I understand the concern from Albom and others. There’s a chance that some of the classics we’ve cherished may be exposed as fraudulent by today’s standards. There’s a fear that future writers will need to be extra cautious, and overly sensitive, when writing about people outside of their immediate understanding.

And yes, that’s it exactly. That should be the case.

E.A. Aymar’s most recent novel is The Unrepentant.

In defense of The Great Gatsby