A Trail of Breadcrumbs

Finding my way — with a little help from William Blake. 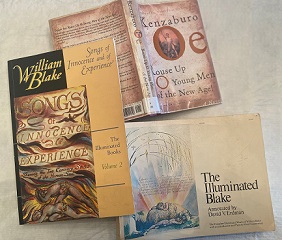 Recently, I have disappeared into myself. Vanishing is not uncommon amongst us humans. I have had people disappear into the thicket of the years, flashing by once in a decade or two, like an almost-extinct bird. My own father vanished when I was about 6 and reappeared momentarily when I was 13. His absence is more natural and certain to me than any flicker of communication.

Serendipitously this week, I picked up an autobiographical novel I found on my mother’s windowsill in Virginia by the Japanese Nobel Prize winner Kenzaburo Oe. Rouse Up O Young Men of the New Age! is about the way a disabled child separates himself from his father, leaving behind his child self to become an adult. Within it is a metaphor for all children.

I have seen close up this separation and how, in so many cases, it is wrapped in eternal cycles of tragedy. I would say Greek tragedy, but stories of separating from parents are present in every culture. In the course of the novel, Oe quotes from the Koran and other religious texts and books. Separation is a rite of passage that roars up like a fire in the night, engulfing both the child and the parent. A proportion of children who return do so out of love. Others out of duty, or for gain, but many, I imagine, out of mercy.

The same can be said of the parent, reaching out to a child but failing to understand or be understood. I talked with another writer, wondering under what circumstances it would be possible to forgive a parent, a parent who would never say sorry or ask for forgiveness. It is a human question, and to those of us for whom it applies, I think it will resonate without much clarification.

This same week, I learned that my father was in a pitiable state. I felt many emotions that I’d anticipated over the years I would feel. Again, what was serendipitous was that Oe’s book was not just about father and child, but it was also steeped in constant references to William Blake’s poems, especially “The Little Boy Lost” (from Songs of Innocence) and “A Little Boy Lost” (from Songs of Experience). Simultaneously, an artist friend lost his father, and within his experience were so many universal and particular truths that I could not help but make these connections mean something.

In “The Little Boy Lost,” the child says: “Father, father, where are you going…/ Speak father, speak to your little boy/ Or else I shall be lost.” In the dark night, “no father was there.”

In the next poem, “The Little Boy Found,” he finds his way to his mother with the help of a God-like figure.

In “A Little Boy Lost,” the boy is considered defiant with his father; selfish, loving himself most, he says to his father, “I love you like the little bird/ That picks up crumbs around the door.” He is stripped and burned at the stake by a priest for his apostasy.

In the winter, I had been reading Blake more closely as a reference for my own writing. I returned to him for “Benefit of the Doubt,” my column on Louise Glück’s Nobel speech. References to Blake are like a trail of breadcrumbs. Reading is like that sometimes — the company we keep with writers we admire finds reiteration in the works of other writers like a nest of eggs in the most intricate labyrinth, within which birds hatch and sing with familiar songs. As a little child, Oe’s disabled son has a perfect musical ear for a hundred different birdsongs over all other sounds.

Recollection of trauma sometimes pushes me deeper into myself. In a way, akin to Hansel and Gretel in the woods, I turn to see if I still have a trail of breadcrumbs to guide me to the safety of ordinary days.

Unlike in the fairytale, my trail is always there. It lies with my artist friends, in the company I keep, and in the books I read. For Blake, "Innocence dwells with wisdom, but never ignorance." Perhaps, then, the question is not so much whether I will forgive, but if I will remain innocent in my wisdom, as I hope my friends will, too.

Leeya Mehta’s new collection of poems is A Story of the World Before the Fence.