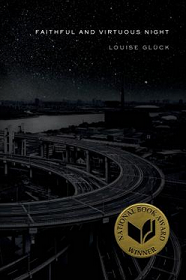 “Long, long ago, before I was a tormented artist…
I was a glorious ruler uniting all of a divided country —”

So begins “Theory of Memory” in Louise Glück’s National Book Award-winning collection, Faithful and Virtuous Night. It is a short prose poem that, in part, questions fate. In it, a fortuneteller equivocates, “Great things, she said, are ahead of you, or perhaps behind you; it is difficult to be sure.”

Greatness, the fate of the artist, and the collective memory are themes present again in Glück’s recent Nobel Prize for Literature speech. I was alerted to the speech by a Facebook post on December 10th (resonant of George Saunders’ short-story collection Tenth of December), having not seen it on the regular news. The speech has received no discernible critical review online outside of this post, in which fellow writers I admire were reflecting on whether her remarks were out of step with 2020. They thought Glück was tone deaf, at best.

I read and re-read her Nobel speech, which cites a well-known tale of Glück’s: As a little girl of 6 or so, she imagined “a contest to decide the greatest poem in the world.” Finalists were Blake’s “The Little Black Boy” and Stephen Foster’s “Swanee River.” Blake wins the competition, and Glück goes on to discuss the very intimate relationship between the reader and the writer, especially writers like Emily Dickinson, who seem to be speaking directly to the reader, pulling the reader in with “Then there’s a pair of us — don’t tell! / They’d banish us, you know…”

Repudiating the notion of the stadium poet, Glück clings to this intimacy:

“I believe that in awarding me this prize, the Swedish Academy is choosing to honor the intimate, private voice, which public utterance can sometimes augment or extend, but never replace.”

She then goes on to lament the plight of the little Black boy who, in the poem, is brought to her, the reader, in an intimate way by Blake:

“I knew this because what the black child says, his account of his feelings and his experience, contains no blame, no wish to revenge himself, only the belief that, in the perfect world he has been promised after death, he will be recognized for what he is, and in a surfeit of joy protect the more fragile white child from the sudden surfeit of light. That this is not a realistic hope, that it ignores the real, makes the poem heartbreaking and also deeply political. The hurt and righteous anger the little black boy cannot allow himself to feel, that his mother tries to shield him from, is felt by the reader or listener. Even when that reader is a child.”

From what I know of her, Glück has a reputation as a truly generous teacher, a celebrant of new voices, and a brilliant mind. She famously said, “Writing is a kind of revenge against circumstance too. Bad luck, loss, pain…If you make something out of it then you have no longer been bested by these events.”

She is a poet for our times, one who brings tenderness to grief. She is both like and unlike many of my favorite poets, including Wisława Szymborska, who won the Nobel in 1996. I am not sure either would call themselves existential poets, which I believe they are, while staying close to the details of daily life in their poems.

What struck me while reading Glück again after the devastating scenes of January 6th, 2021, is how political her poems can also seem. Her narratives on the human condition are peppered with passages like this one from the title poem “Faithful and Virtuous Night,” which comes completely out of the blue, cutting close to the bone:

How then, I wondered, could she have made such a fatal error in her acceptance speech? Or had she? I could not find the heart to judge her. All I wanted to do was listen, to give her the benefit of the doubt.

(I don’t care to equivocate, but I can see that I am doing that. I need to buy myself some time.)

For Christmas, I was gifted Glück’s Faithful and Virtuous Night. I read the poems in it after listening to her interviews and re-reading the Nobel speech. The truth is, I find the speech to be a fascinating conversation piece. I want urgently to know what others think about it, too, and I want this debate to be critical, but without any daggers to the heart. It is time to set aside our daggers.

Here then, is what I mean to do, via Szymborska in “Consolation”:

“Hence the indispensable
silver lining,
the lovers reunited, the families reconciled…
troublemakers banished to other hemispheres,
…prodigal sons summoned home,
cups of sorrow thrown into the ocean,
hankies drenched with tears of reconciliation,
general merriment and celebration,
and the dog Fido,
gone astray in the first chapter,
turns up barking gladly
in the last.”

These are some of the ideas I had when I read the speech: First, it makes me face my own doubt as an artist. The idea that I am reaching one person at a time is reassuring. That there is a conversation between poet and reader — a furtive, private relationship — is exhilarating. I am struck by this idea, not a new one, but conveyed simply by Glück.

But that is not all she is saying. She is also being directly political. She is saying, “In art of the kind to which I was drawn, the voice or judgment of the collective is dangerous.” This line in itself could be the title of an entire college course.

Second, Glück has said in other places that competitions are run by flawed humans. It got me thinking of the inherent oddness of my own childhood. Like Glück, one of my earliest introductions to poetry was learning to recite William Blake, my Catholic-school-educated grandmother’s favorite poet. I also recall singing “Swanee River” as a small child in my Bombay apartment. It could have been on the radio, in school, or on the record player.

I think when reflecting on her influences, Glück may not be as naïve as her anecdote might suggest. She is being honest and, by doing so, could she be presenting us with a dare? She is speaking to the constraints of our births while reflecting on cancel culture. This honesty is a courageous move. By not excusing her origins, she is not hiding them.

Am I overthinking this, or am I, perhaps, just wrong? I don’t know.

Third, to the criticism of Glück being out of step with the times, I do think we have an obligation to art to listen to its critics. We are flawed: There are no heroes, just people. The critics led me to reflect upon my own earliest influences and seek out the other voices I remember, including the Indian poets who draw from the rich history that comes from a country as multicultural as India, with its ear to the pulse of all things international.

As a little child, I read Indian Nobel Laureate Rabindranath Tagore, who wrote the most rousing songs of freedom and was a famous social reformer, yet who married a child of about 10. (I learned this only recently, to my horror.)

The absence of voices of color in the child Glück’s canon is easy to understand, but is it then forgivable that there is no mention of diversity in her Nobel acceptance speech? Or has she chosen to omit any such references to avoid checking a box she knows she cannot do justice to in such a small space? Or is this a way of steering away from the most obvious use of her voice?

She is talking about the Black child, and if this were just about the stadium poet vs. the poet who reaches people one at a time, it would be complete. But she is lamenting the Black child’s fortunes from the pen of a white poet, albeit an abolitionist one. For me, the explicit line missing from her speech is the line that nods to the missing voices. She now is a stadium poet (no matter her discomfiture at that designation), so could she have done a better job acknowledging missing voices?

After all, the speech is clearly about competitions, prizes, and our tendency as humans to create hierarchies of value. It is both directly and indirectly political. Glück is directing us to her influences as a child, bringing back to us the colonial canon. Here is a poet asking what it means to be a poet.

I wonder if she is also asking what it is to be a white poet, although I am not sure if this is fair to ponder. So, I turned to a trusted friend who was a Black child once and asked him what he thought. He liked her speech and had a fond recollection of his own grandmother reading him the Blake poem. My convulsions seemed suddenly out of place in light of his reaction.

Faithful and Virtuous Night contains a series of poems about two young brothers affected by the death of their parents. The poems resonated with me because of their sense of wonder and tenderness. I am left with the sense that now is also a time for tenderness. As the world has shut us in, the hearth is where many are left with our suffering, with what remains:

“I was alone with my brother;
we lay in the dark, breathing together,
the deepest intimacy.”

For all the places I long for, it is the listening and breathing together, the sound of our deepest intimacy, that keeps me writing, loving, living, and dreaming up happy endings.

Leeya Mehta’s new collection of poems is A Story of the World Before the Fence.

Exploring the artist’s responsibility in times of turmoil.