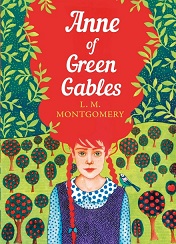 In chapter three of Anne of Green Gables, the lovable red-haired protagonist tries to pass herself off as “Cordelia,” the name she most admires.

Unfortunately, this bid for self-reinvention by the orphan-aesthete doesn’t get too far with her future guardian, Marilla Cuthbert. So Miss Shirley, the firecracker of Avonlea, tries again and counteroffers with a less outrageous request: “But if you call me Anne please call me Anne spelled with an E.”

Notice she doesn’t say, “My name has an E on the end of it, just so you know,” but opts for, “please call me Anne” — a polite version of “Call me Ismael,” the command that alerts readers to an alias.

Later, when Anne’s teacher punishes her for breaking a slate over Gilbert Blyth’s head, he writes “Ann Shirley” in the shaming blackboard note, a rendering of her name — no E — which I suspect favors the plainer version she was given at birth.

What does changing names mean to Anne? Everything, apparently. On her first ride to Avonlea, she renames the Avenue (a stretch of road with an apple tree canopy) “The Way of Delight.” Barry’s Pond gets imagined as “Lake of Shining Waters,” while the unremarkable spruce grove reanimates as a terrific “Haunted Wood,” giving rise to ghost mythology and dryad worship for Anne and her bosom friend, Diana.

In a matter of seconds, Marilla’s cherry tree, “Snow Queen,” which stands outside Anne’s window on the east gable, ascends not just to human status, but to that of an infallible blueblood.

Anne’s romantic naming conventions tell us what she values — elation, beauty, mysticism, and surprise social mobility — pillars that work overtime to sustain her through her deep-seated belief that she is bad.

Like Gustave Flaubert’s antiheroine, Emma Bovary, Anne thinks sensuality and fantasy alchemize into happiness; unlike Emma, 11-year-old Anne must create beauty and luxury on a budget, enlisting her imagination in place of a charge account. And much the same as Anne’s literary analogue, Pip, from Great Expectations, she is loved by an adopted father figure, Matthew Cuthbert, who, like Pip’s Joe Gargery, holds himself at a distance for fear he can’t keep up intellectually.

But if Dickens’ Great Expectations is an inspiration for Anne of Green Gables, it’s an incomplete one. Anne’s creator, Lucy Maud Montgomery, was herself a half-orphan reared by her maternal grandparents on Prince Edward Island. Only Grandfather Macneill, with his cutting sarcasm and mean-spirited witticisms, was nothing like the benevolent Matthew Cuthbert.

Instead, the gentle-but-dull men in Montgomery’s life came in the form of suitors: Herman Leard, a farmer with whom she had a physical relationship while engaged to her first fiancé, cousin Edwin Simpson, and Ewan MacDonald, the man she would eventually marry three years after Anne of Green Gables was published.

Eight years into marriage, Ewan suffered a breakdown and continued to be plagued by depression for the rest of his life. Montgomery herself had a history of mood disturbance, but unlike poor Ewan, she understood the triggers and managed it (for a long time) by being prolific and escaping into her fictional worlds.

Over the years, the couple developed a dependency on the bromides heavily prescribed in the first part of the 20th century for nervous conditions. The two coped with tremendous mental-health strains which were exacerbated by the antisocial behavior of their firstborn son, Chester.

It’s believed by some that Montgomery — warm and charming in person but later shown to be quite judgmental in her diaries — took her own life with an overdose, though not before regaling the world with over a thousand creative works comprising novels, short stories, poems, and essays.

Though Anne of Green Gables is not a gritty work of realism (and only partially autobiographical), glints of Montgomery’s early trials and prophetic hints of sacrifice in her future life flash to the surface in the final third of the story.

Here, Marilla and Matthew are bettered under Anne’s influence: Marilla learns to express — and indulge — her feelings; Matthew faces his fear of women and begins to practice the power of observation. But Anne herself has shrunk back and grown quiet, arm-locked into convention by her many mistakes and the Presbyterian forces of the time.

“What good would she be to us?” demands Marilla in the chapter where Anne tries to become Cordelia. This turns out to be the right question. In fact, Anne’s transfer of vital energies to her adoptive parents does them a whole world of good, especially Marilla, who will have a caretaker after Anne defers university to stay on at Green Gables.

Having dedicated herself to Marilla’s welfare, Anne no longer believes in her inherent wickedness, a new comfort that appears only after she relinquishes a longer-standing and more unique trait: her extravagant passion.

Anne’s trajectory poses a challenge to familiar orphan narratives that default to the adoptive parents as rescuers. Anne Shirley is both martyr and cavalry in her own story, just as Montgomery was in her life as a minister’s wife, as a mother to an extraordinarily troubled son, and as an artist — a force that saw through a glass, darkly, yet chose to create delight for the sake of others.

Dorothy Reno is a senior review editor and classic-books columnist for the Washington Independent Review of Books. If you would like to share your own interpretation of Anne of Green Gables, we’d love to hear from you in the comments section below. You can join Dorothy in reading The Wonderful Wizard of Oz, which will be the subject of her next column at the beginning of May.