A Canadian Classic Gets Its Due

How Sunshine Sketches of a Little Town shaped Canuck culture. 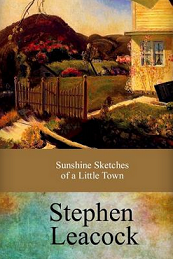 The inside cover of my copy of Sunshine Sketches of a Little Town houses a touching inscription. “To Daddy for Christmas, 1961” (in an adult’s handwriting), followed by three wobbly signatures: “JoHn, coliN, Ellen.”

Before moving overseas to Southeast Asia, I ordered the book secondhand from a seller in Canada. Since then, I’ve repeatedly tipped open the cover — just the cover — to revel in the quiet and historic intimacy of this unknown family’s life. Doing so always moves me, even though “Daddy” evidently never got around to reading this Canadian classic from 1912 written by economist-turned-humorist Stephen Leacock.

I know this because although the book had yellowed and gone fusty, its spine had never been cracked — until I did it for myself, and up from the pages rose a satanic plume of black mold that made me ill for a few days.

Naturally, I tried to clean the book. When that didn’t work, I wore a mask to read it. And when that didn’t work, I dropped the thing into a Ziploc bag and left poor Mr. Leacock and his fictional town of Mariposa (plus Daddy, the kids, and their 1961 Christmas) overnight in the freezer. Which only succeeded in making the mold stronger, possibly by reminding it of its Canadian origins.

Finally, I left the book in my back yard for several hours, exposing the mold to the direct sunshine of a Vietnamese summer.

You might say I was having a (sorry for this) Leacockian time of it. Something like the rural Dean, Mr. Rupert Drone, one of many beloved and humorously drawn characters from Sunshine Sketches, whose problems with debt get solved after his heavily insured church mysteriously burns down. Or Peter Pupkin, junior teller at the Exchange Bank, who tries to win Zena Pepperleigh’s love through traditional means — her father is a notable Conservative — by hiding in the lilac bushes and speeding past her house several times a day on a bicycle.

Leacock’s unknown, unnamed narrator repeatedly tells us the town of Mariposa and its memorable cast are like small towns and small-town people everywhere in Canada. They come together in times of crisis, as with the burning down of the “Church of England Church” and, later, for the rescue of the sinking Mariposa Belle on Lake Wissanotti, whose depths know almost six feet.

These folks present a congenial front to outsiders (when the prince visits), and their support of local personalities borders on corruption. But that doesn’t mean they get along. Fault lines run between Conservatives and Liberals, between the Church of England Church and the Presbyterians, between people of God and people of science. Even the Infant Class and the Mother’s Auxiliary have potential for conflict.

We recognize the types. Not just from small-town life but also from our own families, friends, and office relations. And from the mirror, should we choose to look.

Most of us will see something familiar in Judge Pepperleigh, who thinks making more than $3,000 a year (in 1912) is immoral. (He makes exactly $3,000.) Or in the Reverend Drone’s church debts, some of which owe to his poor bookkeeping skills that are clearly the fault, he likes to say, of an ineffectual math teacher. We know and maybe even admire the guileless narrator, who sees the best in everyone up to the point of absurdity.

Here and there are moments of humor that cut through the century between the publication of Sunshine Sketches and a contemporary reading of it. On the evening before the Mariposa Belle sinks, Morison, a worker from the local hardware store, decides not to go on the cruise. He’s spooked by hearing about too many accidents and tells his wife, “Perhaps your mother might like to go.”

Peter Pupkin’s decision to commit suicide while attending a poetry event is another timeless moment in dark humor, especially when he ends up getting high from mixing antacids with cherry soda, which, in turn, helps him appreciate the poet.

Some other comic scenarios are merely cute — the rescue boats sent to save the people aboard the Mariposa Belle begin taking on water — while other, more dated punchlines lose their vigor in the time it takes to calculate inflation rates or to Google “early 20th-century tie pins.”

Sunshine Sketches was read and celebrated in Canada and other English-speaking countries for several decades after its release. Today, it’s modestly known by students of Canadian literature and a few keeners over the age of 55. But if the collection itself hasn’t entirely stood the test of time, it needs saying that Leacock’s depictions of small-town people shaped — even helped create — part of the Canadian psyche.

Which is to posit that Leacock’s comedic instincts and values were absorbed into the core of Canada’s central cultural institution, the Canadian Broadcasting Corporation, founded in 1936. In the 1960s, the CBC adapted Sunshine Sketches, but more broadly, it affectionately mimicked Leacock’s parody in wry programming (e.g., “This Hour Has 22 Minutes,” “The Vinyl Café,” “This Is That,” and productions from Royal Canadian Air Farce) that embraces a sardonic, amiable ethos Canadians absorb as though through the groundwater.

After all, how must a town — or a middle-power country — respond to the presence nearby of mightier, more glamorous realities? It must hunker down. It must love its own people. It must learn to laugh at itself and see the Homeric in the ass-backward (something to the tune of my black-mold ordeal). In Canada, we take the piss out of each other. And when no one’s around to do it, we can count on some small-scale calamity, weather- or wildlife-related, to remind us of our place.

The best part of Sunshine Sketches is when the narrator takes a deeper look at the people of Mariposa — who they really are, what they might have become had circumstances permitted. Jeffery Thorpe cuts hair for a living, but he’s much more than a barber. Billy Rawson, the telegraph operator, might have been an inventor. The town’s undertaker, Golgotha Gingham, surely, has a hidden poet within. “He has told me,” says the narrator, “himself.”

Dorothy Reno grew up in Canada and is the classic-books columnist for the Independent. If you would like to share your impressions of Sunshine Sketches of a Little Town, we’d love to hear from you. You can join Dorothy in reading A Christmas Carol, which will be the subject of her next column on December 13, 2021.

How literature can improve your life.