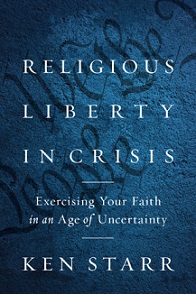 A Gallup Poll recently reported that church membership in America declined from 70 percent in 1999 to 47 percent in 2020, mainly because only 36 percent of millennials attend church, and the number of those citing no religious preference increased 13 percent. With the unfortunate but real progression of some people’s faith preferences changing over time from religious to irreligious to antireligious, Gallup’s findings surely trigger heartburn in those who support freedom of religion, found at the beginning of the Bill of Rights.

In the 21st century, no religious-liberty advocate has been more prominent than former federal appellate judge, U.S. solicitor general, Pepperdine Law School dean, and Baylor University president Ken Starr, a bona fide “man in the arena,” who not only possesses deep faith, but also has argued several First Amendment cases before the Supreme Court.

In his new book, Religious Liberty in Crisis: Exercising Your Faith in an Age of Uncertainty, Starr artfully lays out the particulars of history’s most important lawsuits and statutes that have addressed this preeminent constitutional right while generating their fair share of controversy, ever since the Warren Court banned any prayers in public schools that “aligned the government with an expression of faith,” in its 1962 Engel v. Vitale decision.

As an example of Starr’s graceful prose, here’s how he describes New York’s former statute that required the recitation of a brief prayer at the start of each school day, and why it was successfully challenged in the Engel case:

“The Empire State’s law contemplated an exception for conscientious objectors. Students could opt out. But an opt-out provision, thoughtful though it was, could not wash away the original sin of the government fashioning and framing prayers…

“The court’s ruling [that the New York law was unconstitutional] was limited. It created a clear distinction. What a state could do in certain free-speech contexts, it could not do with religious speech. Though a state or local government could lawfully require the recitation of a state-crafted pledge, it could not require the recitation of a state-crafted prayer.”

To accentuate the relevance of his subject in this “age of uncertainty,” Starr’s first chapter details how the pandemic heightened the tension on the issue as local and state governments imposed lockouts at churches all over the country while simultaneously allowing so-called “essential businesses” to stay open, including casinos in Nevada, which somehow survived a litigation challenge by a 5-4 vote when the case was expedited to the Supreme Court.

Starr has bold intentions for his book. He seeks to educate the masses on the controlling religious liberty doctrines that have been created in the leading cases and laws over the last 60 years, breaking down Supreme Court holdings and congressional statutes into tight explanations that provide a roadmap for laypersons to follow when evaluating their rights. Such doctrines include:


Starr makes clear throughout the book that the Supreme Court is made up of an ever-changing group of brilliant people who occasionally err, all driven by their unique wiring to sometimes follow, sometimes ignore, and sometimes bend precedent with extreme convolution. They do what they do in their varying uses of precedent in order to put themselves in a position of maximizing their opportunities to comply with the most important rule of constitutional law, first expressed by Justice William Brennan: The Rule of Five — because “with five votes, you can do anything.”

The book vividly demonstrates how the combination of certain outcome-determinative factors has produced occasionally confusing results at the Supreme Court in religious-freedom cases, allowing some decisions to retain a vestige of precedential value (and thereby survive under the doctrine of stare decisis) even though their holdings have been effectively (but not expressly) overruled in subsequent opinions.

Religious Liberty in Crisis concludes with the author’s stating his grave concern over the future of religious liberty in light of America’s secular-humanist ilk asserting its ever-increasing power to cut back on the rights of people of faith. Readers with a progressive political philosophy will likely find the last part of the book discomfiting, as Starr explains why he believes:

Regardless of the reader’s political preferences, for those troubled by the decline of religion in this country and the rise of faith antagonists in recent years, Starr’s new book succeeds as a concise yet complete tutorial on his subject’s history and current status.

He concludes that the Supreme Court’s current makeup (enhanced by the recent addition of Justice Barrett) and its sometimes right/sometimes wrong commitment to stare decisis (as it will likely be applied to preserve the well-established doctrines created over the last six decades) should provide a measure of comfort to the faith community, to the effect that the future will not diminish the precedents set in the landmark holdings, and the Court will continue to construe the constitutional right to freedom of religion more broadly than will ever meet with the approval of anti-faith zealots.