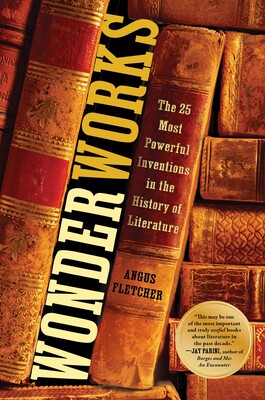 When I was an English teacher — a period that lasted decades — one challenge I faced more often than I liked was the student who loved to read but hated my class. Teenagers who devoured books but loathed analyzing them, who read constantly but wanted no part of my questions, discussions, or essays.

According to Angus Fletcher, a professor of narrative science at Ohio State, I was doing it all wrong. As he writes in Wonderworks: The 25 Most Powerful Inventions in the History of Literature, the common approach to literature taught in schools the world over — and which I became pretty good at — misses the point. It treats literature as a form of argument so that people like me stand in front of the room and ask questions like, “What is this writer saying?”; “What is this poem’s perspective on life?”; and “What do this novel’s representations imply about society?”

As Fletcher tells us, asking and answering such queries is not why writers write or readers read. Literature isn’t an argument; rather, it’s a technology designed to improve our lives. Literature generates sensations that readers need to experience, things like love, courage, empathy, and serenity. Literature can help us overcome stress, connect with our fellow humans, and find joy.

In short, we read in order to grow into our best selves.

Literature can help us do all this through its verifiable impacts on the brain. Its success hinges on how well an author utilizes various techniques — or “inventions,” in Fletcher’s language — that cause specific neurological effects: stimulating the amygdala, reducing activity in the parietal lobe, and releasing dopamine, oxytocin, and cortisol.

At the risk of approaching this premise like an English teacher, let me say that Fletcher’s argument is structured around two related strategies. First, he makes the case for literature’s value chronologically, examining how its practical worth has evolved and expanded over time.

We begin in 400 BCE, with Greek tragedy, which, he maintains, is “a source of healing” because it “encourages us to revisit our past experiences of trauma by staging suicides, murders and assaults.” We continue through Homer and Sappho, the Book of Job, Dante’s Inferno (which “shakes us out of our old mental torpor…liberating us to think for ourselves”), Hamlet (who helps us overcome grief via his inability to get revenge), Jane Austen, A.A. Milne, Gabriel García Márquez, and many others, ending with Elena Ferrante (who elicits in us a dopamine bond that helps us conquer our natural fear of the future).

The range of works covered is even greater than this list indicates, since at the end of every chapter, the author recommends other works — including movies, comics, and videogames — that use similar technologies to achieve similar ends.

Fortunately, Fletcher wears his mastery lightly. His writing is never heavy or even a little academic. He introduces his authors with breezy, often witty biographies that establish their historical context and the human need addressed in their work. It’s not surprising that someone so steeped in narrative studies can tell a good story; this volume is both an original history of literature and a page-turner full of fascinating portraits and eye-catching details.

The second choice Fletcher has made in organizing his argument is to examine a wide range of literature in terms of technology. Plays, novels, and poems, he asserts, are technological inventions created to improve human existence. They come out of specific socio-historical contexts but have proven infinitely flexible, expanding to meet ever more complex needs.

Throughout Wonderworks, literature’s evolving “inventions” — the plot twist, the first-person narrator, irony, imagery, metaphor, paradox, and satire — are presented as innovations that expand the power and practicality of literature itself. Enduring works don’t happen accidentally, says Fletcher. They have been engineered to benefit humanity in specific, practical ways.

In his view, for instance, Mary Shelley designed Frankenstein to give readers the neurological experience of detached self-awareness. She “invented” a new approach to the horror story that affects cortisol levels in the brain. As a result, we feel more morally independent — separate from both Dr. Frankenstein and his monster — after the cortisol has done its work.

Likewise, Jonathan Swift, in Gulliver’s Travels, invented an unreliable narrator who helped us suspend judgment and look at the world with an open mind — a technological way to bring about peace of mind in the reader. While this may seem overly specific, even reductive, I admit that Fletcher’s descriptions of these assorted literary technologies are persuasive.

Such focus on invention and technology does raise questions, however. First, the term “invention” itself begs the question of originality. Did Sophocles really invent the epiphany? Was John Donne the first to use paradox to link the impossible and the possible? Did Maya Angelou originate the use of both autobiographical and sociological prose in the same work?

While I found myself distracted by these quibbles, perhaps they are beside the point. Whether or not Fletcher has identified a technique’s correct inventor doesn’t undercut his argument that the technique itself has significance.

The other not altogether welcome quirk of his invention trope is Fletcher’s decision to give these innovations new names. Since the words I force-fed students in my literature classes — metaphor, imagery, paradox, and so many others — are aesthetic terms unrelated to practicalities, Fletcher relabels them.

Hence, Homer did not invent the epic, but the “Almighty Heart” necessary to live through it. Aesop may have used irony and personification, but what he created was “the Serenity Elevator.” And Shakespeare’s greatness is recognized for its two premier inventions, “the Sorrow Resolver” and “the Humanity Connector.”

Are these criticisms simply sour grapes from a former English teacher? Possibly. While Angus Fletcher seems, at times, to have his heart set on an anti-intellectual history of literature, he has nonetheless produced a massive re-reading — and admirable expansion — of the Western canon. To top it off, that re-reading is itself readable, thought-provoking, and, yes, practical. Wonderworks is a fascinating book aimed at people who love to read, whatever they think of literature.