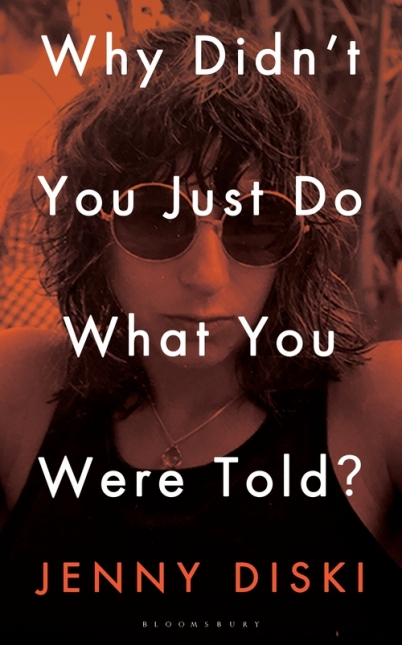 Beyond writing 10 novels, a story collection, and eight book-length works of nonfiction, the late Jenny Diski also contributed over 200 essays and reviews to the London Review of Books over a 25-year period. That is impressive output for someone whose ongoing self-portrait speaks of a love of lassitude. Indeed, she says, “Indolence has always been my most essential quality.”

Diski, who died of cancer in 2016 at the age of 69, had been a newspaper columnist prior to starting her run at LRB, but the review gave her more real estate and the freedom to let her expansive mind wander in whatever direction it chose.

Her editor at LRB, Mary-Kay Wilmers, became a good friend; it is Wilmers who selected the columns that form Why Didn’t You Just Do What You Were Told?, which flows in chronological order from Diski’s inaugural piece in the review to the first in a series of 17 essays (“Another fucking cancer diary”) that later became the book In Gratitude, published after her death.

As both Wilmers, in the introduction, and Diski’s daughter, Chloe, in the afterword, note, virtually every LRB column involves Diski writing about herself in some way, just as her writing always did. The “I” of the author is a strong presence throughout, and it is inarguably what makes her work so compelling. She makes no pretense of being a disinterested observer — makes no pretense of anything — and her obvious comfort in weaving herself into any and every subject is an invitation to settle in and listen. She does not hold back, and she is never boring.

Most of the columns here are book reviews, many for biographies, and what a line-up they represent: from the rich and famous (Howard Hughes, Richard Branson, Keith Richards, Dennis Hopper) to the infamous (Jeffrey Dahmer) to the scandalous (Christine Keeler) to the royal (back-to-back princesses Diana and Margaret) to the politics-adjacent (Denis Thatcher). She also considers an entire set of the wives and sisters of authors (Vera Nabokov, Sonia Orwell, and Elizabeth Nietzsche) and other famous men (Martha Freud).

Sometimes it’s even for other reviewers, as she scratches her head over the fawning praise heaped onto Keith Richards’ mess of a seemingly unedited stream-of-conscience autobiography. For herself, she declares, “I’ve dutifully slogged my way through every damn word, so I’m going to write about it anyway.”

(One wonders whether Wilmers selected primarily negative reviews for this collection in order to showcase Diski’s savage wit, or whether there simply weren’t many positive reviews to choose from.)

The most personal of the reviews is of historian Barbara Taylor’s memoir, The Last Asylum, in which Taylor describes in detail her 20 years as a mental patient. Diski finds herself competitively matching up their experiences, comparing and contrasting, and finally “sputtering, ‘I should have been MUCH madder than I was. I haven’t been NEARLY mad enough.’”

For me, the very first essay, “Moving Day,” told me I was in good company. In it, Diski’s former live-in lover (“the Ex-L-i-L”) is moving his stuff out, while daughter Chloe (unnamed here) is off on holiday with her father, Diski’s ex-husband.

She is looking forward to three solid weeks of solitude, something she finds essential to her being. “It’s a celebration of solitude that won’t be broken by people coming in from the outside world with their own stories and their own internal speed.” No matter how much you may love or care about someone, living with them means you must adjust yourself to account for them. What a gift: the freedom to stop having to adjust.

Moreover, I could not help but think of all the mothers trapped in the house during this pandemic year with families whose perpetual demand to be fed and cared for took them to the brink. “No one here now,” Diski writes of herself in her otherwise empty flat, “finds eating an essential part of their life…I make regular trips to the fridge to gaze on its cosmic emptiness. I adore its lit-up vacancy. No L-i-L, no daughter, needing the fridge full of possible feasts.” An ocean of women moans with desire for such a longed-for release.

That search for an essential solitude informs one of the headline essays in this collection, “A Feeling for Ice,” which formed the kernel of her travelogue/memoir Skating to Antarctica. It’s the longest piece here and serves as a master class in the weaving of seemingly disparate subjects into a cohesive whole.

Diski seeks a landscape of pure white, “a place of safety, a white oblivion,” and, not having found it elsewhere, decides to pursue it in Antarctica. The thing from which she seeks safety is, at its heart, a childhood of tumult and precarity.

“My mother was a woman whose behavior was often inexplicable. Living with her, day by day, was like skating on newly formed ice. It constantly shattered, every day, but there was no alternative, no other place to go.” Since her father died when she was 18, Diski had not had any contact with her mother, a fact with which she is fully at peace.

She does, however, go back to the apartment house of her childhood and discovers residents from that era still there after all these years. She’s invited over to chat with these contemporaries of her parents, who offer insights about them that have the power to darken even the happier memories Diski holds. “I’m washing down this family history of social crime and multiple suiciding with my second cup of tea.”

When she finally makes it to Antarctica, it takes some searching to find what she’s after. Eventually, though, she goes off and discovers an isolated cove, her company some seals and penguins, “and suddenly here I am, just where I want to be, in a snowy, lonely place.” For Diski, there is safety in solitude.

Jennifer Bort Yacovissi’s debut novel, Up the Hill to Home, tells the story of four generations of a family in Washington, DC, from the Civil War to the Great Depression. Her short fiction has appeared in Gargoyle and Pen-in-Hand. Jenny is a member of PEN/America and the National Book Critics’ Circle, reviews regularly for the Washington Independent Review of Books, and serves on the Independent’s board of directors. She has served as chair or program director of the Washington Writers Conference since 2017, and for several recent years was president of the Annapolis chapter of the Maryland Writers’ Association. Stop by Jenny’s website for a collection of her reviews and columns, and follow her on Twitter at @jbyacovissi.

A Poison Like No Other: How Microplastics Corrupted Our Planet and Our Bodies