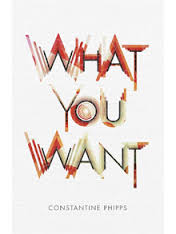 Constantine Phipps’ novel What You Want is a mixture of the complex and the commonplace. Phipps begins by paraphrasing the first line of Dante’s The Divine Comedy, “When I was in the middle of my life,” and continues, loosely paralleling the structure of Dante’s work to tell us the story of Patrick, a man who has lost his wife because of his sexual indiscretions. Feeling like a failure, Patrick mixes an overdose of sleeping pills with alcohol.

As Dante passed under the sign “Abandon all hope, ye who enter here” and proceeded through the various levels of Hell with the poet Virgil as his guide, so a comatose Patrick passes under a sign reading “Live the Dream” and proceeds through the Epcot-like Themeparkland, guided by Sigmund Freud.

Wandering through the park’s innumerable exhibits, Patrick and Freud meet actors and animatronic figures playing persons historical, sociological, psychological, philosophical, and religious. These are as diverse as Washington, Jefferson, Cleopatra, Plato, Teresa of Avila, the warring Guelphs and Ghibellines of Florence, Pope Celestine, and a cast of many, many more. The various characters opine on the nature of happiness and its relation to love, sex, status, and power. Patrick, in turn, reflects on the events of his own life that brought him to the loss of his wife.

The novel’s structure — it is written entirely in verse — is a great and admirable feat. Phipps manages to deliver couplets that rhyme without pulling the reader into a repetitive singsong rhythm, and so provides as much variation to the ear as would prose. Despite this achievement, however, the speeches of his manifold figures have a didactic sameness of delivery.

By contrast, separate verse stanzas interposed amongst those speeches infuse Phipps’ philosophical musings with greater life and, on occasion, wit. For example, in one poem, Cleopatra states: “I find that once a man is bitten, it’s best to get the contract written.”

In another, a “Christian boy” with a romantic view of gypsies, declares:

A girl who doesn’t love you is like the winding road:
an endlessly receding promise to fulfill.
Don’t call it love unless you feel this thrill.

To which the gypsy responds:

For them this is a home, and not a bivouac:
don’t call it love, unless she loves you back.

There is even a stanza at the end of the book reminiscent of The Rubaiyat of Omar Khayyam:

Walk with me, darling, near that anchoring line
where all our intimacies are begun;
for it is not given to humankind
to find happiness with more than one
companion on the road; and you are mine.

On the other hand, though Phipps casts a wide net amongst his historical figures, their teachings do not appear to be terribly deep. Many of the “truths” they reveal echo truisms we have all heard without adding any substantial or original insights (e.g., that a dying man will not regret having spent too little time at work; that people like what is familiar and are suspicious of the new; that beauty is socially defined, etc.).

Furthermore, Patrick’s story of repeated infidelity and self-pity is pedestrian. His rationalizations have more in common with Henrik Ibsen’s hapless, forever self-excusing Peer Gynt than a Dante-esque seeker of truth, wisdom, or redemption. Ultimately, the novel’s philosophical ambition feels too lofty for the plot Phipps hangs it on.

Nevertheless, in Jeannette Winterson’s essay “Testimony against Gertrude Stein” (in Art Objects, Essays on Ecstasy and Effrontery), she argues that “a book cannot be judged by its subject matter any more than a picture can. We need to look at the experiment of the piece. The riskiness of art, the reason why it affects us, is not the riskiness of its subject matter, it is the risk of creating a new way of seeing.” If one takes Winterson’s view, this novel may be worthy of study.

Jessie Seigel is an associate editor at the Potomac Review. Her fiction has appeared in numerous publications, including Ontario Review, Gargoyle, and the anthology Electric Grace. She also writes on writing at the Adventurous Writer.