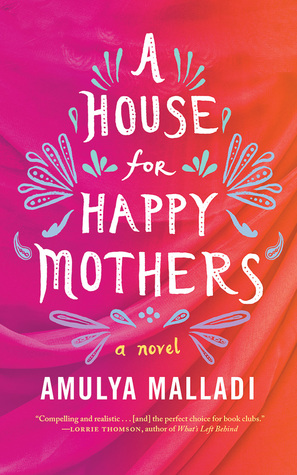 An English teacher once told my class that at the heart of all great works is a Faustian bargain. Amulya Malladi's A House for Happy Mothers, which is about surrogate pregnancy, offers a close look at just such a deal. It asks the question: What would you do to create — or save — your family?

Priya lives in Silicon Valley with her adoring husband, Madhu. She has a career and a life that includes spin class and brunch. But she can't get pregnant, so she and Madhu decide to have a baby through a surrogate, Asha. Asha lives in India, where she and her house-painter husband scrape by. She longs to give her two children more, especially her intellectually gifted son, Manoj. Her family reacts with distaste, but Asha becomes a surrogate anyway, seeing her sacrifice as a crucial path to opportunity.

Throughout the novel, Malladi creates much fodder for book-club discussion by ratcheting up the tension in her characters' lives. The story deals with big ideas, but it's often the quiet scenes that make it readable and compelling. For example, Malladi describes Priya's dinner-party host: "Though diamonds sparkled on her ears and fingers, her eyes were dull beneath the glitz."

Priya's friends debate whether to stay home or keep working when they have children. They bicker with their husbands, and sometimes their child-rearing techniques appall her. Yet she longs to join them. Priya and her mother, too, come down on opposite sides of the surrogacy issue, since her mother believes Priya might not be meant to have a baby. "Have you thought about that instead of running around impregnating some strange woman with your child?" she asks.

A lively cast of secondary characters — Priya's friends, her feuding mother and mother-in-law, Asha's surrogacy-veteran sister-in-law, the other women in Asha's position — rounds out the narrative and provide voices to the many ways in which to examine and justify the matter at hand.

"You're doing this so that your daughter can study and be a lanja munda like Dr. Swati. Strong. Independent," another surrogate tells Asha, summing up their situation more neatly than the introspective Asha can.

The most electric sections of the novel take place in India, where Asha, who finds her life tiring and complicated, gestates and waits in a house filled with women doing the same thing. Most of them have left their children with relatives and moved into the House for Happy Mothers, where 15 women co-exist until delivering the babies they are paid to carry. The house has dirty windows, one bathroom, and a housemother who "was kind and treated all the women like daughters, but could also be strict."

During a movie-theater field trip, the women are allowed to have soda, but at the house, they eat only healthy food. They watch soap operas, and one resident believes that the shows should add a surrogate storyline. "We're giving a gift to someone — something they can't get themselves — and they give me the resources to build a better life."

For Asha, that better life consists of educating the brilliant Manoj, who has already skipped ahead two grades in his local school. Asha and her husband disagree at times, but Manoj's untapped potential drives her forward. At one point, Asha is circumspect about her situation, which makes her feel sheepish. "First she had to sell her womb to get money," Malladi writes. "Now she had to sell her honesty to get Manoj into a good school."

Malladi's writing is straightforward, plot driven, and full of dialogue. Interspersed throughout are posts from an online message board Malladi calls www.surrogacyforyou.org, which Priya, as she hopes and waits, posts on and reads. Notes that the mothers leave for each other indicate the anxiety surrounding surrogacy. "I believe that when women use surrogates they feel the need to be extra hysterical because they don't have the baby growing inside them," one poster taunts.

Throughout, Malladi uses her characters to piece together the ideas and questions raised by the surrogacy process. She doesn't shy away from the sadness and despair that can accompany it, and if things don't resolve neatly at the end, readers understand why.

The book's title may come from the name of the group home — and carries with it more than its share of irony — but it also evokes the larger theme of happy motherhood. Priya and Asha seem very far apart, but as the novel progresses, their love for their children — the one to come and those already here — ties them together.

Eliza McGraw is author of Here Comes Exterminator! which is about the 1918 Kentucky Derby winner. It came out in April from St. Martin's Press. Her website is www.elizamcgraw.com.