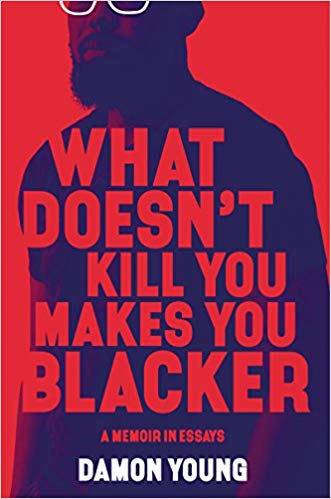 Damon Young is an established source of intelligent and entertaining commentary about race in America. Cofounder and editor-in-chief of the immensely popular VerySmartBrothas, and a columnist for GQ, he can always be counted on for a whip-smart analysis of news and pop culture. And while his flippant tone may, at times, trigger bouts of not-all-white-people-itis, he also pens incisive and serious commentary on issues such as the politics of race.

In What Doesn’t Kill You Makes You Blacker: A Memoir in Essays, Young turns the lens on himself, exploring some of the deepest and most intractable divisions in American society through his own personal experiences.

What makes this memoir so refreshing and unique is the humor he infuses into the precarious state of being black in America. His introduction, “Living While Black is an Extreme Sport,” sets the stage, explaining why the idea of deliberately chasing risk seems absurd to a black man:

“I’m especially enthralled by extreme sports, where white boys from Montana and Arizona and West Virginia perform athletic feats in competitions whose only purpose for existing is to bring participants close enough to death to give it an Eskimo kiss…Having to go to such extreme lengths to feel a rush is an alien concept for me, since living while black has provided me with enough thrills to make Wes Craven scream. Whenever I am followed by a police officer while driving, for instance, the theme song from Mission: Impossible plays on a loop in my head, and the mental checklist I run through reminds me of Ethan Hunt attempting to defuse a nuclear warhead.”

He continues with a cheeky imagined scene of a cop driving behind him, a looming traffic-stop emergency in which harm-abatement measures include strategic deployment of kombucha, turning down the car stereo, and switching to a Taylor Swift song.

I hasten to add here, Young’s an equal-opportunity critic. He doesn’t just point a finger at white-power dynamics, but also at misogyny, toxic masculinity, performative violence, and homophobia — and how all of these elements manifest in black culture.

He often does this by calling himself out and examining some identity traps he’s fallen into during his life. He exposes his past mistakes, setting his former, younger self up as straw man of sorts to reflect on less enlightened ways of thinking and behaving.

In one essay, he discusses how the movie “Love Jones” shaped his perceptions of what it meant to be a man and how to get a woman — sheer doggedness and becoming a “bomb-ass poet” would be his tools to getting the girl, and having her would validate him in the eyes of his peers. The takeaway is, of course, how misguided and reductive that approach actually was.

In another essay, he digs up the learning experience of how a little hubris around his rising fame contributed to the firestorm surrounding his “rape responsibility” essay, and his eventual awakening to the extent of rape culture: “It’s not just a culture, it’s an atmosphere. It’s not just an atmosphere, it’s an amniotic fluid that soaks and brines and feeds and shapes us.”

By offering himself up as the punching bag, Young defuses just enough tension to tackle difficult issues of race and identity. Rather than accusing his readers of being brutes, he leans close to them and hooks a thumb back at his former, less-enlightened self, saying, Look at that guy. Can you believe him? He had some growing up to do, didn’t he?

That said, Young doesn’t claim to know everything, or even to speak for all black people, acknowledging that “the experience of American blackness is too varied and motley to feign some sort of universality.”

He admits to the hypocrisy of writing screeds against gentrification while eating a Panera bread bowl of seasonal turkey chili; he openly speculates as to whether he’s derived certain personal ticks from the pressures of racism or merely individual idiosyncrasy. This honest and self-effacing approach makes his experiences relatable, even to readers who didn’t grow up black and male in America.

At times, it’s easy to forget that this is a memoir because larger societal issues are consistently intertwined in his reflections. In writing about the death of his mother, for instance, he wonders what role being a black woman in this country might have played in terms of health stressors and the quality of her medical care.

He ponders whether he can continue to find the same cathartic release in his Thursday night basketball games, knowing that one of his favorite players in the group is a Trump supporter — should he have to bring stress into his refuge by challenging the guy, or should he have to leave and lose this joy completely?

Despite its connection to current affairs, this book is, at its core, memoir. When Young discusses race, he operates on the black-white continuum, and when he talks about blackness, it’s quite often male blackness. And readers who have a problem with the N word, whether it ends with “a” or “er,” take note: Young doesn’t hold back. The book is studded with it, along with eloquent exposition of his philosophy around its usage.

[Editor's note: Damon Young will appear at this year's Gaithersburg Book Festival on May 18th in Olde Towne Gaithersburg, MD. Click here for a full schedule of events.]

Tara Campbell is a Kimbilio Fellow, a fiction editor at Barrelhouse, and an MFA candidate at American University. Her novel, TreeVolution, was published in 2016, followed in 2018 by her hybrid fiction/poetry collection, Circe's Bicycle. Her third book, a short-story collection called Midnight at the Organporium, will be released by Aqueduct Press in 2019. Tara teaches at various venues in the DC area, including  the Writer's Center, Politics and Prose, American University, and the National Gallery of Art.