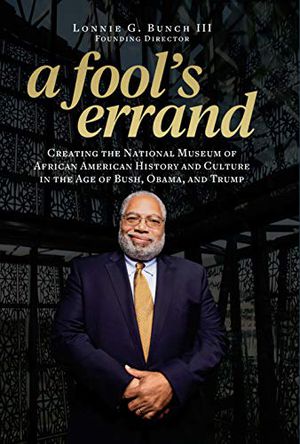 Since its opening in September 2016, the National Museum of African American History and Culture has become a premier destination on the National Mall in Washington, DC. Over 6 million visitors have entered its space so far, and the “dwell time” statistics compiled by staff note that most visitors stay for at least five or six hours.

The lingering makes sense: Visitors to the museum encounter a staggering collection of over 40,000 objects and photographs that capture the African-American experience, from relics found on the Southern plantations where slaves labored for generations, to the original coffin of the lynched Emmett Till, to a plane flown by the famed Tuskegee Airmen during World War II, to the boxing gear of Muhammad Ali.

If there are two words that best describe A Fool’s Errand, the new memoir by the museum’s founding director, Lonnie G. Bunch III, they are “optimistic” and “hopeful.” Those were the words repeatedly intoned by Bunch during his 11-year odyssey of creating one of the nation’s most important museums. And if there are two phrases to describe Bunch, they are “big hearted” and “full of grit.”

Having previously served as an associate director for Curatorial Affairs at the Smithsonian National Museum of American History and as president of the Chicago Historical Society, Bunch was selected for his current position in 2005. His task was to create a space where not only African Americans could reach their ancestors and celebrate their achievements, but where every American could come and realize the interconnectedness we all share as part of this republic.

Essentially, Bunch’s goal was to create “a place that would make America better.”

On the first day he reported to work in July 2005 (in a small ramshackle office with a broken door), all he had was a dream, one staffer, zero objects, no budget, and a yet-to-be-determined location. A Fool’s Errand tells not only his story, but our story, as well, given the very public nature of the museum.

The book’s central characters include three presidents: George W. Bush, who enthusiastically endorsed the project and signed the legislation to get it started; Barack Obama, who had the honor of officially opening the museum; and Donald Trump, who, when given a private tour of the museum by Bunch, was most interested in the people of the Netherlands, who “love him.” He seemed not to acknowledge the Dutch role in the African slave trade.

Among Bunch’s many challenges — including fundraising, hobnobbing with the rich and famous, selecting an architect, choosing a building design and related materials, and working with both the legislative and executive branches of the federal government — perhaps his biggest was to create a space that all Americans could embrace and comprehend. He writes:

“I had always believed that the museum should be a safe haven that helps Americans wrestle with and better understand the difficult current issues of race, justice, and equality. In essence the museum is a bully pulpit that provides NMAAHC with the opportunity to clarify and contextualize concerns that often divide or perplex the American public.”

Not unlike Edward T. Linenthal’s Preserving Memory: The Struggle to Create America's Holocaust Museum, A Fool’s Errand explores the nuances of designing a space that addresses difficult and painful issues, particularly given that there has yet to be a meaningful national conversation on race in America.

Readers who enjoy history, public memory, meaning, and commemoration will find a great deal in this book to consider. If they read it deeply, no doubt they will have encountered themselves, and Lonnie G. Bunch III will be more than satisfied.

The Jersey Brothers: A Missing Naval Officer in the Pacific and His Family’s Quest to Bring Him Home

Though rich in details, this WWII-era saga feels disjointed and overly long.