We Measure the Earth with Our Bodies: A Novel

This multi-generational saga follows the travails of Tibetan exiles. 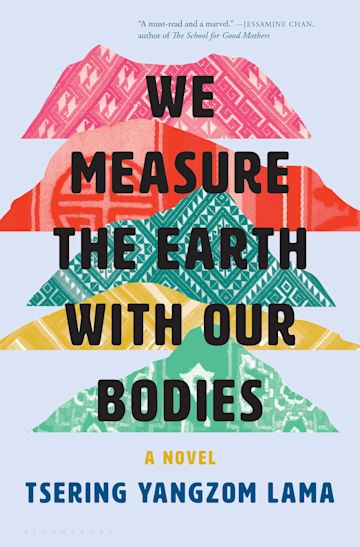 “Ama was an oracle.”

The first sentence of Tsering Yangzom Lama’s debut novel, We Measure the Earth with Our Bodies, speaks volumes about what kind of immigrant story is about to unfold. The narrative begins in 1960, shortly after the Chinese army occupies Tibet, causing “the Precious One,” the Tibetan spiritual leader, to flee to India. Soon, after persecution and massacres, many other Tibetans follow, including the oracle, her husband, and their two daughters, Lhamo and Tenkyi.

During the long and arduous journey into Nepal, the family is entrusted with a ku, a small statue of a nameless saint:

“A thin, almost skeletal figure. Naked but for his loincloth, even the gold pigment on his body has nearly worn away. Seated, he looks up at the sky with a pained expression.”

The ku is known to Lhamo and Tenkyi’s ama; when she first showed signs of being an oracle, it was brought to her by a high monk who himself had been given it by a saint who “told the high monk that the ku did not belong to him or anyone else. It would appear and disappear depending on who needed it.”

Before Lhamo and Tenkyi reach the refugee settlement in Pokhara, Nepal, both their parents die. The girls come under the care of their uncle, with Tenkyi designated as the heir to Ama’s gifts. The man who bestowed the ku upon them later brings his handsome nephew Samphel to the camp, where he and Lhamo share a deep, mutual attraction. A bastard with identity issues, Samphel is attracted to making money and leaves the camp, betraying Lhamo’s love.

Later, Tenkyi gets an opportunity to study in Delhi but fails to achieve her promise and returns in disgrace to the camp before finally immigrating to Canada. Lhamo, still living in the camp and stuck in a failed marriage, sees Samphel, now a successful businessman, when he returns for a brief visit. Lhamo gives him the ku, as it was his uncle who delivered it to her ama. They spend the night together, and nine months later, Lhamo has a daughter, Dolma.

The girl eventually joins her aunt, Tenkyi, in Toronto, where she pursues her dream of becoming a scholar of Tibetan history and culture. One day, Dolma attends a party of wealthy art collectors, where she finds the ku:

“And here he is. Our camp’s lost Saint. So humble, so precious. Looking up with teeth bared, eyes wide, as if struggling to speak. I almost want to laugh because right here on this cluttered oak table, in this object, is our entire history, the whole of our civilization.”

The narrative then goes back in time to trace how the ku came to be in Toronto while also progressing forward to a heartfelt, satisfying conclusion that returns the story to the border of Tibet and Nepal.

Throughout, author Lama masterfully conjures Tibetan culture, the country’s annexation by China, the travails of the Tibetan diaspora, the majestic mountain landscape of Tibet, and the claustrophobia and despair of a refugee settlement. The plot is well crafted and tight, with plenty of twists and turns to keep the reader engaged until its emotional end. Her prose is beautiful, and she deftly folds the unfamiliar in with the familiar so that the reader can easily deduce the meaning of untranslated words and unknown cultural practices.

This sense of familiarity also comes from the formulaic nature of contemporary Global South emigrant novels: a transgenerational saga told from multiple first-person viewpoints that shifts in time and place, contrasting the exotic Old World with the alienating New, with the heavy hand of fate ushering characters to profound moments of cultural connection and ancestral revelation.

There’s a doomed-love story here, along with several illegitimate children, a mystic talisman, and an ending more sweet than bitter. Readers are not only entertained, they are also educated, which seems to be an important requirement for many when they venture into fiction by immigrants, people of color, and other marginalized voices.

We Measure the Earth with Our Bodies is a flawlessly written, absorbing novel that checks all the boxes for book clubs and readers of well-researched fiction by authentic voices. With this winning debut, the talented author has earned the right to push boundaries and challenge the conventional narrative with her next effort.