War on the Border: Villa, Pershing, the Texas Rangers, and an American Invasion

A gripping account of the territorial tensions bubbling over long before cries of “Build the wall!” 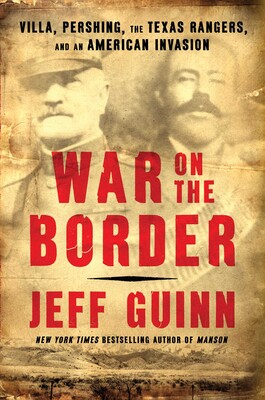 Trouble on the U.S.-Mexican border is nothing new. Carved from conquest yet practically indefensible, a source of grudge and panic but usually ignored in the name of commerce and comity, this long dividing line between two incompatible nations has periodically generated violence. Jeff Guinn details one of the most intense periods of cross-border bloodshed in his galloping new narrative, War on the Border: Villa, Pershing, the Texas Rangers, and an American Invasion, centered on the U.S. military’s intervention in Mexico just a little over a century ago.

The United States invasion was just one, though admittedly consequential, incident in a larger story of political unrest in Mexico. Much of that unrest can be blamed on the country’s ambivalent relationship with its powerful northern neighbor. Mexicans generally disliked Americans, Guinn explains, not least because Americans generally despised Mexicans as racially inferior. At the same time, Mexican governments appreciated the economic development and tax revenue yanqui investors could offer their impoverished nation.

This contradictory combination of economic dependence and cultural irritation was of course not unique to the Mexican American relationship and still exists today in nations across the globe where the U.S. has interests. These conflicting impulses in Mexico in the early 20th century (as in many countries later) sparked simmering rebellions by natives against American influence and the usually corrupt local governments that profited from it.

It was the search for one such rebel movement, led by the always flamboyant and often cruel Pancho Villa, that drew U.S. troops across the border in 1916. Little did they know their invasion what just what Villa wanted. He understood that the quickest way to undermine the hated government in Mexico City was to reveal it as incapable of repulsing the Americans, while the best way to recruit soldiers to his banner was to be seen bravely battling the invaders.

First, Villa tried to lure the U.S. in with an attack on American lives and property in Mexico. When the U.S. government showed unexpected restraint, Villa realized he would have to violate American sovereignty if he wanted to ensure reciprocation. So, he led his hundreds of followers into Columbus, New Mexico, where they murdered and burned with abandon.

Events from this tumultuous period anticipate a blended version of modern American dilemmas: not only the economic, security and humanitarian complexities of our porous southern border, but also U.S. interventions halfway around the world in Vietnam, Afghanistan, and Iraq. As in those later military adventures, American soldiers who’d been assured they would be welcomed as liberators were instead resented as interlopers; insurgents melted into the civilian population and inhospitable terrain; and U.S. political considerations prohibited a speedy retreat from an untenable situation.

This border battle occupies a grey zone between the archaic and up to date. Cavalry was still an indispensable and glamorous branch of the Army, yet the American expeditionary force also relied on cars and trucks and even, for a brief time, airplanes. Cattle rustling remained a regular threat for ranchers and reliable business for bandits, even as American reporters — including newsreel photographers — shadowed Villa’s movements and created a cinematic villain for U.S. audiences.

As a history buff who unrealistically expects order in past events, I was always irrationally disturbed that the U.S./Mexican expedition occurred in the midst of Europe’s Great War. It seemed to me as if every war should have the stage to itself. But Guinn makes clear that these two conflicts, far from intruding on each other’s independent storyline, were instead closely connected.

Germany knew that if the United States abandoned its neutrality, it would be to join the side of Britain, France, and Germany’s other foes. The Germans, therefore, had an interest in keeping the U.S. occupied with — and at — its troubled southern border. They cheerfully supplied all Mexican factions with arms to keep the fire lit. They dangled the promise of territorial reconquest of the American Southwest if the Mexican government allied with Germany and declared war on the U.S.

German meddling finally backfired when the British shared with the U.S. government an intercepted telegram from Germany’s foreign minister to Mexico’s president, officially offering support for Mexican reconquest of Texas, New Mexico, and Arizona. (The Germans apparently would have tossed in California, too, if they hadn’t already promised it to Japan.)

Guinn offers both the light and dark of key characters, which, in addition to Villa, include U.S. Gen. John J. Pershing, who led the incursion, and George S. Patton, an ambitious young officer under his command who would gain greater fame (and notoriety) in World War II.

Brutality and brilliance distinguished figures on both sides of the fight. Yet the one reputation that comes out thoroughly tarnished is that of the state’s paramilitary police force, the Texas Rangers. The author finds nothing to redeem the Rangers’ openly racist disregard for Mexican lives and the rule of law.

Guinn’s unhappy conclusion is that little has fundamentally changed at the border. Americans still complain of Mexican incursion, but as he illustrates with a disturbing quote near the book’s end, those complaints are often rooted in a continued refusal to accept the basic humanity of our southern neighbors.