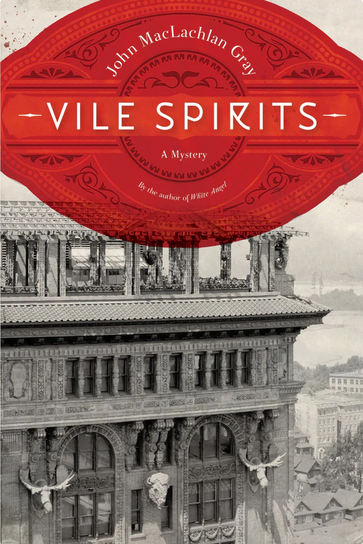 The attorney general of British Columbia has been sitting in a wingchair in a hotel ball­room awaiting His Royal Highness the Prince George, freshly fleeing a royal scandal in London. The AG is quaffing martinis and feeling under the weather. A touch of flu? The late pandemic is on everyone’s mind, except maybe his.

He’s thinking about his 42-vote margin in his recent squeaker of a re-election. A nasty business, especially the way he conducted it. And then somehow the prince has come and gone — retired for the evening — and so, too, has the attorney general. He has expired for eternity, his body — eyes wide open — found in the chair the next morning, newspapers across his lap.

So begins Detective Sergeant Calvin Hook’s newest case in Vile Spirits, playwright-director John MacLachlan Gray’s spirited sequel to The White Angel. In his first outing, Hook was a mere cons­table stationed in the Point Grey boondocks learning the ropes. All he had going for him was a keen in­telligence and an occasional reck­less­ness in letting it show, unmindful of his bosses’ pred­il­ection for staying clear of upper-class and politically inconvenient suspects.

Now, Hook has been promoted to Vancouver Police Department head­quarters ­and charged with training the unimaginative, un­in­qui­s­i­tive, by-the-book dullard Constable Quam. It’s time to learn the latest craze in police work — finding evidence — and to do so without being exposed to sarcasm, a form of verbal abuse, Quam tells his mentor, that “is frowned upon in the VPD.” To succeed in his new position, we are told, “Hook will have to put out of mind the VPD’s earned reputation for incompetence and venality.”

Limerick-writing journalist Ed McCurdy observes from the wings. Tipped off to the recumbent corpse by Hook himself, he cultivates a range of colorful sources by dangling cash and exuding im­patience, spite, and an occasional desire to do right in a city overflowing with corruption and inter­secting lines of influence-peddling and backstabbing. Chief among his tell-all accom­plices is Mildred Wickstram, the “hello girl,” a telephone company operator who eavesdrops with aplomb on the calls she connects. (Gray provides tran­scripts of her quaint phone con­nections to remind us that things really do change.)

Mildred, who has a knack for insinuating herself into strangers’ lives, arrives for a tea party at the home of her newest connection, Mrs. Crombie, wife of a fab­u­lously successful Vancouver real estate tycoon, now a deputy minister, with designs on higher political office. The ladies drink, nibble, and chat, but as the hours wear on, Mrs. Crombie has trouble focus­ing.

Minutes after Mrs. Crombie stands and announces a visit to the ladies’ room, her Chinese house­keeper shocks the assemblage by crying for help in perfect English. Mrs. Crombie has collapsed, dead. Next to her sink is a bottle found to have dispensed the same sort of martini the late attorney general drank just before he died.

The new AG wants Mr. Crombie to head the Liquor Control Board and put a lie to the old saying “that the LCB entails too much liquor and not enough control.” Crombie accepts and recruits one Daisy Douglas Tyler, “the American temperance activist,” co-founder of the Indianapolis chapter of the Anti-Saloon League, and organizer of the Queens of the Golden Mask, which fights alcohol, prostitution, and immigration and promotes “racial purity.”

The Queens “is more commonly known as the Women’s Ku Klux Klan,” and its leaders, including Daisy, profit from inflated initiation fees and sales to members of essential KKK paraphernalia such as robes, swords, cigars, piano rolls, “Klan Water,” and books, including the Kloran (the Klan bible). Daisy sweeps into the opera house with a bravura demand for liquor control and eugenics on behalf of the People’s Prohibition Association.

After that, everything gets worse fast. McCurdy is stomped half to death. Hook is led astray. Quam attacks a suspect. An elevator operator spots a sniper and identifies him as an American. A hotel manager has two telephones on his desk for some reason. Mildred attends a Klan talk by the Grand Goblin in the luxurious drawing room of a fabled estate, where she is assaulted but fights back. She locates McCurdy, who has been shot, and cleans him up.

Meanwhile, Crombie is overheard making a shocking confession during a secret tryst. And that’s less than half of it. Mildred files a lawsuit, and McCurdy disappears again amid whispers of a pending lobotomy. And that’s still not all of it.

From its first pages, Vile Spirits pulls the reader along its wry cavalcade of anarchy, des­per­a­tion, intrigue, coincidence, and frenzy through scenes set by a playwright with an eye for staging and an ear for deadpan dialogue. Stifle your temptation to race toward its startling denouement. Read slowly and savor it from the start.

Jethro K. Lieberman is Martin Professor of Law emeritus at New York Law School. Now living in Bethesda, Maryland, he is the author of 30 books, including Liberalism Undressed (Oxford Uni­ver­sity Press, 2012) and a recent mystery, Everything Is Jake (Three Rooms Press, 2021).