A complex portrait of Baltimore during the Federal period as viewed through the lens of two remarkable women. 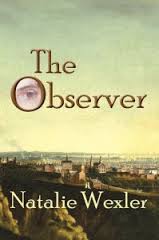 Eliza Anderson, the daughter of a prominent Baltimore physician, was the first female editor of a periodical in American history. An intellectual, she ranked among a small group of women in Federal America conversant in philosophy, history, art, and architecture. In the pages of a newspaper called the Observer, she hoped to elevate the sensibilities of her readers and attune them to the merits of “arts and sciences.”

In contrast, Margaret McKenzie was a young woman born into less fortunate circumstances. Her father once owned a farm, and her mother was an accomplished artist; she was not from the lowest class. After a series of misfortunes, however, her father sought work in Baltimore, eventually operating the mud machine in the harbor, one of the worst occupations a man could find in the city.

Reduced to poverty, Margaret began to work at an early age. She arrives at the Anderson house in “tattered clothes hanging from an undernourished frame” after losing her position in the household of a wealthy French family. Dr. Anderson, Eliza’s father, takes her in as both a servant and a caretaker for Eliza’s young daughter, Polly. Margaret quickly develops a close relationship with Polly because Eliza is too devoted to her editorial duties to spend time with the girl.

In The Observer, author Natalie Wexler sets up her two protagonists in contrast to one another. Eliza is of some means (strained though they may be), well-educated, intellectual, and disinclined toward her domestic duties of motherhood and housekeeping. Margaret is impoverished, minimally educated, and motherly in her devotion to Polly.

As the narrative moves toward its denouement, we discover that both women are mavericks who struggle against the traditional roles society assigns them. The plot gradually reveals the complexities of these two characters and shows them to be more similar than different. Both Eliza and Margaret, for instance, are ambitious in pursuits not typically undertaken by women in the early 19th century; Eliza wants to write, and Margaret wants to be a portrait painter.

Likewise, both women speak their opinions freely, a trait considered “unfeminine” by society, and often act through passion rather than reason. Their similarities ultimately unite them, but for most of the story, the women maintain a hostile relationship.

One of the great strengths of this novel is Wexler’s ability to draw complex characters who are not entirely what they seem. Her characters morph in intriguing ways that draw the reader more deeply into their individual stories. Many are at one moment victims and, at another, “schemers.” This vacillation between the two dynamics creates intrigue and drives the plot.

For example, one of the first historical figures the reader meets is Elizabeth “Betsy” Patterson Bonaparte, the Baltimore woman who married Napoleon’s younger brother, Jerome. In 1805, Eliza, Betsy’s closest friend, accompanied her on an ill-fated trip to Europe. The imperious Betsy is at first portrayed as the victim, abandoned by her husband after Napoleon annulled the marriage. Only later does Betsy reveal herself as a plotter who manipulates Eliza into temporarily ending a relationship with Eliza’s true love, Godefroy.

The true “schemer” of the story, however, emerges in the form of Mr. James Cork, initially a contributor to the Observer. Cork becomes Eliza’s great enemy, even creating a publication, the Spectacle, to combat her editorials. Their back-and-forth published barbs become the banter by which, in part, Wexler moves the story to its conclusion. Cork’s courtship of Margaret, at first tender, becomes a grand manipulation that leads to devastating betrayal.

As an historian, Wexler is able to place her reader “on the ground” in Federal Baltimore, a city just reaching its golden age of commercial success and cultural growth. Reading this book, one feels as if you are walking the muddy streets, smelling the slums, even glancing through the windows of Baltimore’s elegant townhouses.

Wexler adeptly shows the profound contrasts between the city’s privileged and working classes and reveals, quite accurately, how little the two groups grasped their differences.

When Eliza asks Margaret why she was reduced to living in Baltimore’s almshouse instead of finding work, she cannot imagine the few economic options available to a woman in Margaret’s class. Margaret remarks, “I hardly knew where to begin explaining it all to her.” For those with resources, the life of the poor was beyond comprehension.

Writing about this period requires an understanding of America as a new nation, struggling with its identity as a democracy and its role on the international stage. As an accomplished historian, Wexler is well-equipped to introduce her readers to this era and the individuals who inhabited it.

The criticism lodged at both Eliza and Betsy as lovers of “aristocracy” during the course of the story is appropriate and accurate. Wexler’s use of the naval skirmish between the American Chesapeake and the British Leopard in 1807 draws the reader’s attention to the very real threat from England that hung over America in the years leading up to the War of 1812.

The rich and accurate real-life details that punctuate Wexler’s story make The Observer an example of engaging and imaginative historical fiction. This is a novel that will instruct and delight readers, tempting them to learn more about early Baltimore.

Alexandra Deutsch, a graduate of Vassar College and the Winterthur Program, University of Delaware, is chief curator of the Maryland Historical Society in Baltimore and curator of the exhibition “Woman of Two Worlds: Elizabeth Patterson Bonaparte and Her Quest for an Imperial Legacy.” Deutsch’s forthcoming publication based on the exhibition is a material culture study of Elizabeth Bonaparte and her descendents.