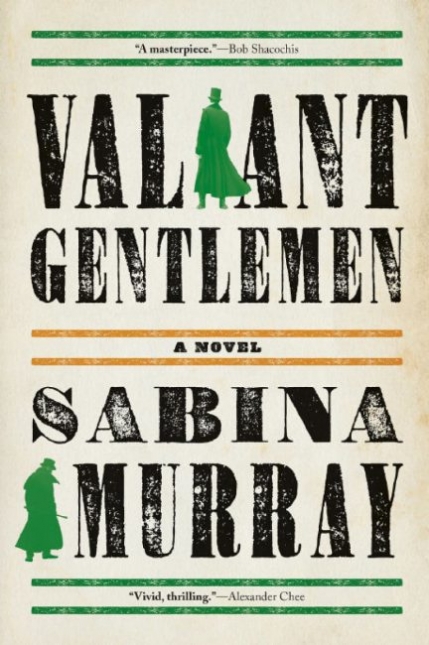 In Valiant Gentlemen, PEN/Faulkner Award-winner Sabina Murray has produced an engrossing novel, by turns dark and funny, incisive and tender — an I-can’t-talk-now-I’m-deep-in-Africa kind of read.

Spanning four continents and 33 years (1886-1919), Valiant Gentlemen focuses on the lives of three historical figures — diplomat Roger Casement, sculptor Herbert Ward, and Ward’s wife, Sarita Sanford. The novel turns on the friendship among the three: how the relationships grow, falter and come undone; how life and the processes of history get in the way of love and loyalty.

Casement is a perpetual outsider. A tightly closeted homosexual in a world that will not countenance homosexuality, he’s an Irishman by birth, working as an English colonial administrator and diplomat. He’s an advocate for native rights among imperialistic men who fall short of attributing to indigenous people even the most basic equivalent humanity. Alone and plagued by self-loathing, though always kind to others, Casement is, above all, one who struggles with moral ambiguities.

When, for example, he’s instructed to enforce a ban on ritual sacrifice among the Africans, he perceives and is troubled by a complexity in what would seem an outright good — for he knows the hypocrisy of the English and respects the integrity of native culture. Always able to see another side to things, he lives in a world he can't quite parse, and he’s forever torn about who he’s fighting for, or with.

Herbert Ward, Casement’s best friend, is the most conventional of the three main characters, a man inclined to accept the moral platitudes of his age. There’s a dense single-mindedness about Ward. An artist who loves adventure, he’s attracted to the ideals of nobility and courage — without any questioning, even in the face of unimaginable savagery by an upper-class companion, presumably civilized.

Sarita, an heiress, is tart in conversation, with an originality in her intelligence and a perceptive, quicksilver wit. Beautiful and capable, she is a woman navigating a world of men in which women have no place and no say — not even during childbirth, when her father and husband get to choose whether or not the attending doctor may directly observe her relevant female parts. Her marriage with Ward is passionate and difficult, honest and secretive, complicated. She’s a survivor, even when she’d rather not be.

Their stories intertwine with events in history: the colonization and rape of Africa and South America; the growth of the United States in world affairs; the Boer War; the invention of the motor car and aeroplane; developments in art, writing and the press; the growth of the women’s suffrage movement; and World War I and the Irish rebellion.

All sorts of familiar figures make appearances in their lives: Joseph Conrad, both in the jungle and at his country home in England; Alfred Harmsworth, known to the world as Lord Northcliffe, proprietor of the Daily Mail; Mary Kingsley, “spinster explorer” and journalist, who died while nursing soldiers in the Boer War; and the explorer Stanley, and the truth about his search for Livingstone.

There’s a complementarity in the lives of Casement and Ward, whose experiences are either similar or diametrically opposite. In their earlier days, both Casement and Ward suffer a sense of dislocation, the feeling that wherever they are is reality, and wherever they have been before a dream. Europe denies Africa; Africa obliterates Europe.

Time passes, and Ward becomes old and sedentary, while Casement, though frequently ill, is still active, exploring, advocating. It’s as if Casement is living Ward’s alternate life for him — that is, until world war comes, and Ward supports the British cause, while Casement, caught up in Irish affairs, goes over to Germany. Then it’s the current reality that seems a dream.

Murray’s language is gorgeously devastating, succinct and muscular, hefting multiple meanings. The plight of Africa reverberates in the twin phrases “white men in white clothing, black men in black skins.” Virtually every word vibrates with under- and overtones. Images are nuanced; verbs surprise and delight: a goat “relieved of the burden of freedom,” a rowboat “bucks in the waves,” and the moon, “skirted in clouds, watches on coldly.”

Murray shows perfect pitch in dialogue, along with an uncanny ability to define character, provide exposition, and develop the plot, sometimes all within the same sentence. Seeming non-sequiturs later prove to have been wholly apt — producing a haunting, unnerved feeling, like being in the jungle.

Occasionally, her language is unnecessarily abstruse — a “synechdochic devolution,” a “metronymic manifestation.” Anachronistic language sometimes jars — “I’m calling in sick,” “do the math.” Relative pronouns following a preposition are routinely given the wrong case: “the little silver plate extended by…whomever performs that task.” And the pages are littered with errors that should have been picked up by a competent proofreader.

This reader found the earlier sections of the book more compelling than the last section. The politics of world war and the Irish rebellion are explained more sketchily than the politics of colonialism, and the story itself feels somewhat rushed.

But these are quibbles.

Valiant Gentlemen is a book to be savored slowly. Called (on Murray’s website) a meditation on colonialism, it is so much more: a leisurely, penetrating rumination on loving relationships, on loyalty, on the meaning of valor, on betrayal, on the nature of civilization, and on the excruciating fun of storytelling itself.