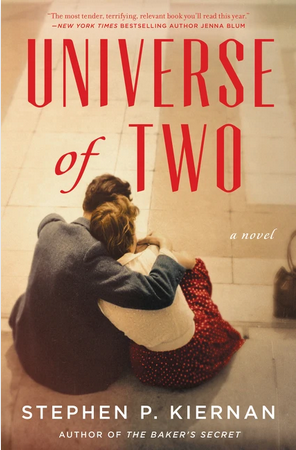 Young Charlie Fish — partly modeled on Manhattan Project junior physicist and (later) organ builder and entrepreneur Charles Fisk — meets aspiring organist Brenda Dubie in her parents’ music shop in Hyde Park in 1943. Charlie has been snatched away from college at Harvard and sent to the University of Chicago to help solve math equations he’s not yet aware are crucial to the success of the Manhattan Project. Brenda’s admission to Oberlin Conservatory is on hold as she clerks in the family shop while her father and brother serve in the war.

Charlie wanders into the music shop while Brenda is struggling to unseal boxes of sheet music. He helps; she plays a Chopin nocturne on the organ. True love, interrupted by predictable romantic setbacks and geographical separations, follows. Brenda, who is pretty, popular, and vain, isn’t fully convinced that string-bean Charlie is good enough for her — although her mother, a wily matchmaker, is very sure.

Brenda warms, cools, and preens by turns. Charlie remains steadfast but hapless, including in matters touching on his math duties in the university’s top-secret Metallurgic Lab. Despite the fact that Charlie’s uncle John runs the program, Charlie is soon demoted to the basement soldering department and faces possible expulsion.

The “weak-chinned” but resolute young man learns to solder expertly — if way too slowly for readers’ comfort — and is whisked away to a secret location in the desert (Los Alamos) to design, build, and solder to plate-metal spheres gizmos that turn out to be detonators for “the Gadget,” which turns out to be the atom bomb.

The portrait of the workstations and barracks at Los Alamos through Charlie’s initially innocent eyes is mildly interesting. As he becomes increasingly aware of the disturbing nature of his work, the narrative becomes urgent. Should he quit? It doesn’t help that Brenda, still in Chicago, isn’t answering his letters.

There isn’t a lot of suspense built into Universe of Two. Readers know long before Charlie does what he’s working on and how it will be used. They also know that for all the crossed signals between Brenda and Charlie, the two will marry and share a long and happy life.

Chapters alternate between third-person accounts of Charlie’s work and his growing love for Brenda and first-person retrospective accounts by Brenda — often rueful — of her growing devotion to one of those rare men whose “greatest kinds of strength are hidden” and who “cannot be stopped until they’ve changed the world. Which [Charlie] did twice.”

Brenda’s final chapter, set in the 1980s, after Charlie’s death, reveals how her beloved husband changed the world a second time, expiating his war work by designing and building the world’s most sonorous organs, and how she dedicated her life to helping him. A cloying note on which to end a sentimental but well-intentioned book.