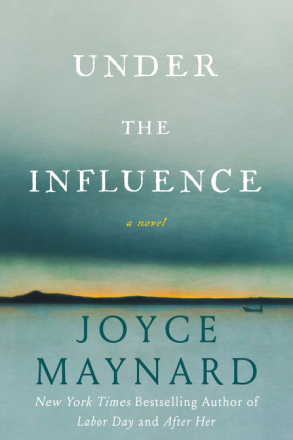 My daughter’s favorite authors are Munro, Styron, and Tyler, but while running several miles every morning, she prefers to listen to novels she describes as “not trash, but ones that don’t make me think too hard.” Judging by that standard, I can recommend Under the Influence, Joyce Maynard’s ninth work of fiction.

The novel’s narrator, Helen, says, “It had not occurred to me that I might make my own choices in life. I was waiting to see what the people around me wanted to do, and when someone offered a suggestion, I took it.”

Her parents suggest estrangement. A married man suggests she drop out of college and move in with him, six months before he suggests he wants to move back with his wife. Dwight, whom she doesn’t seem all that excited about, suggests they get married and a few years later suggests they get divorced. At age 38, she ends up with huge lawyer bills she can’t pay, a rotten job, and Oliver, the 5-year-old she adores.

The only suggestion she doesn’t follow is the one to avoid drinking and driving. In the habit of consuming a bottle of wine after Ollie goes to bed, she’s arrested for DUI while taking him to the hospital with a hot appendix. Though the court’s guardian ad litem testifies she’s a great parent and Dwight isn’t, the judge, whose wife was killed by a drunk driver, gives him custody and sends Helen to AA.

Three years later, she meets Ava and Swift at a gallery opening she’s catering for extra cash, and they adopt her into their enchanted circle of money, parties, and intimacy. Enthralled, Helen leaps to become their friend and employee. She is oblivious to how quickly they overstep boundaries to manipulate her. She accepts their constant sexual bantering and exaggerates or invents stories of her own sexual encounters to entertain them.

Because they look down on the man she’s dating, she questions her relationship with the nice but nerdy Elliot, who wants to marry her. Dismissing or failing to react to signs that Ava and Swift are dishonest, racist, and narcissistic, Helen, “for some reason [feels] the need to get their OK, if not their blessing…they were that important.”

But they also provide a way for her to attain closeness with Oliver and the possibility of regaining custody of him, which in turn motivates her to overlook what she shouldn’t. When Oliver witnesses an accident involving Swift’s son, Swift attempts to trade money and influence for silence. As the jacket cover exclaims, “Helen must choose between the truth and the friends who have given her everything.”

That sounds dramatic, and although Helen must finally make a choice, she doesn’t struggle with moral issues or, well, much of anything. Suddenly, in either overly convenient and/or outright unbelievable ways, her problems solve themselves. Which brings me back to the issue of not having to think. Maynard’s prose is very readable, and for readers who prefer to be simply entertained by lots of action rather than challenged by a well-wrought novel, Under the Influence will do, especially if one is training for a marathon.

If you read too closely, you will notice the book’s loose construction and quick fixes that skim over, summarize, or omit pivotal scenes that would detail character and story development. Helen’s not so much an unreliable narrator as a semi-conscious one who skips the introspection and explanations readers need with statements like, “I was baffled.”

While she repeatedly admits to her “own willingness to adapt to whatever the situation required,” her recognition of her flaws has neither any real emotional resonance nor any impact on her behavior. Not that characters can’t do insanely stupid things, but a first-person narrator telling a story long after the fact has an obligation to be conscious and aware in retrospect, even if she wasn’t at the time of the action.

And the novel is littered with statements not backed up with actions or visceral examples, as in genre romances, where details are often thrown in for dramatic effect rather than deepening character or plot. For example, Helen invents tall tales for Ava and Swift’s pleasure, but then any sign of her tendency to fabricate disappears, as does her random kleptomania. One storyline is simply a lie, disclosed at the end of the book but with none of the foreshadowing that should set up the reveal in lieu of duping the readers.

Even the nuts and bolts of factual detail that would keep the story realistic seem wobbly. Ava is confined to a wheelchair, and yet she seems to be quite mobile at times. She’s thin, and yet her clothes fit Helen, who “could stand to lose a few pounds.”

In this book, Tell trumps Show. By the last third, I was writing What!?!? in the margins. Maybe I should have just gone for a run. At least a long walk.

Internationally published and nationally awarded author Barbara Esstman, BA, MFA, is a National Endowment for the Arts Individual Artist Grant recipient, and a VCCA, Virginia Commission for the Arts and Maryland Arts Council fellow. She is the co-editor, with Virginia Hartman, of A More Perfect Union: Stories and Poems about the Modern Wedding (St. Martin's Press). She is also author of The Other Anna and Night Ride Home, both published in the U.S. by Harcourt Brace and HarperPerennial and in numerous translations by Bertelsmann and other foreign presses. Both novels were adapted for TV film by Hallmark Productions. Her short stories and essays have appeared in Lear's and various literary magazines such as Confrontation, and they have been recognized by the Library of Virginia, Pushcart Prizes and the Redbook Fiction Award. Her articles have appeared in the Washington Post, LA Times, and St. Louis Post-Dispatch, among others. For over 30 years, she has taught creative writing at universities and the Writer’s Center in Bethesda, MD, and she also does developmental editing with individual clients.

A comic book drawn in words, this is one raunchy novel.