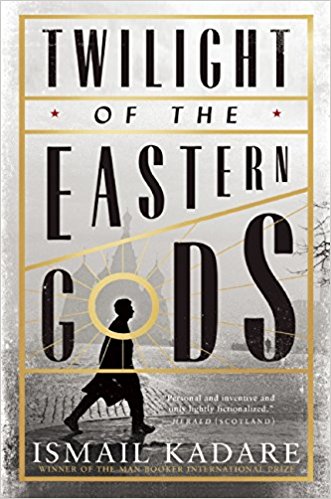 There’s a moment at the end of W.G. Sebald’s Austerlitz when the reader is left with a wandering, unfinished feeling — the very emotion the tormented title protagonist experiences. Ismail Kadare’s slim Twilight of the Eastern Gods evokes a similar sensation. By its conclusion, readers are left not with any great insights, but instead with a sense of slow-motion, Kafkaesque torpor.

I suspect that’s the point.

Set in Moscow in 1958, Twilight of the Eastern Gods is a fictionalized first-person account of the Albanian Kadare’s own time at the Gorky Institute for World Literature, a prestigious graduate school where writers from across the Soviet Union are brought together and, ahem, strongly encouraged to produce stories, plays, and poems with a socialist bent. Big Brother isn’t officially the dean of students, but he might as well be.

Opening at a summer writers’ retreat on the Baltic Sea, the novel’s first few pages set the tone for what is to come. Although the days pass pleasantly, if prosaically, enough, nighttime brings nothing but a chill dullness, broken up — or made worse — by endless games of table tennis.

“Only every so often, in short, rebellious bursts, would I manage to break free from my enslavement to the little white sphere,” says the unnamed narrator. In those instances, “I would jerk my head towards the shore, and every time I turned, like a sleepwalker, towards the water’s edge I hoped to spy in the far distance, at long last, something different from what I had seen the day before. But the seashore at dusk was merciless. It had nothing to offer but a view it had probably been rehearsing since the dawn of time.”

Things aren’t much peppier back in Moscow, where the students reassemble after a holiday. Walking the echoing sixth-floor corridor of the institute’s colorless residence hall, the narrator takes silent stock of his comrades, hardly concealing his disdain for the many vodka-pounding, obscure-language-speaking, churlish martinets from every corner of the U.S.S.R.

“Some were chairs of the Writers’ Union in the Autonomous Republic or Region and had been obliged by the burdensome duties of their position or by insidious plots to give up their studies,” the narrator observes.

“At long last, after overcoming their adversaries, having accused them of Stalinism, liberalism, bourgeois nationalism, Russophobia, petty nationalism, Zionism, modernism, folklorism, etc., having crushed their literary careers and banned the publication of their works, having hounded them into alcoholism or suicide, or, more simply, having had them deported, that is to say, having done what had to be done, they had been inspired to come to the Gorky Institute to complete their literary education.”

Although the book’s foreword reveals that Kadare’s years at the institute weren’t all bad — coming from an Albanian backwater to the much more cosmopolitan Moscow was exciting for the ambitious young man — the author never lost his contempt for the Soviet system and the ways in which artists like himself were expected to champion it.

When Albania was expelled from the Warsaw Pact in the 1960s, Kadare’s creativity was effectively unmuzzled. It wasn’t until 1978, though, that Twilight of the Eastern Gods was completed and published (first in Albanian, later in French, and finally, this fall, in English). And while the book hardly provides an exhaustive look at Cold War society, it does offer a spare glimpse of one budding scribe’s attempts to navigate it.

This sparseness leaves the story maddeningly skeletal in places. For every bit of action that piques readers’ interest — from the narrator’s attempts to alternately woo and discard his girlfriend, Lida Snegina, to the real-life furor over Boris Pasternak’s Doctor Zhivago winning the Nobel Prize in Literature — there are stretches of inaction and ennui.

Mercifully, these stretches are punctuated by dry wit, such as when the narrator observes two students from far-flung Eastern Bloc countries dissecting a classmate’s disappointing writing style: “‘Stulpanc, you really don’t know what you’re saying,’ Nutfulla Shakenov broke in. ‘You’re trying to tell me about that decadent Procrustes, or whatever his name is, but do you realise that in all the tundra and the taiga put together, in an area of three million square kilometres and then some, there is one, and only one, writer and that’s Kyuzengesh? Do we really need a literary theory just for him?’”

And do we really need this meandering account of a moment in time behind the Iron Curtain? Yes. Despite its shortcomings, readers will come away from Twilight of the Eastern Gods with a better understanding of what it was like for one writer to trudge along under Nikita Khrushchev’s thumb. They may end up feeling unsatisfied and flustered, but then, so does the narrator.

A moving and dramatic imagining of the Jonestown tragedy