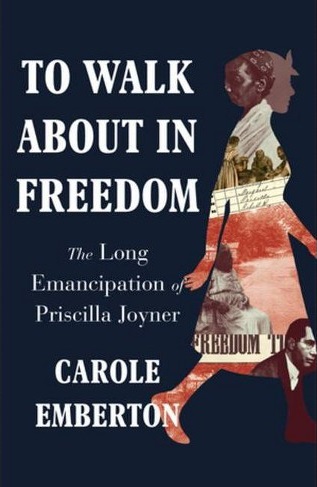 In the prologue to her book To Walk About in Freedom: The Long Emancipation of Priscilla Joyner, author Carole Emberton lays out the national backdrop of a very personal conversation between the woman of the title, a resident of Suffolk, Virginia, and two visitors who wanted to talk with her about her life. Joyner was nearly 80 years old on the day in the late 1930s when that discussion took place.

Her visitors were Roscoe Lewis, a professor from nearby Hampton University, and a young, unemployed teacher named Thelma Dunston. They were with the Federal Writers’ Project (FWP), which hired out-of-work reporters and teachers to gather the life histories of everyday Americans. The pair visited Joyner to ask about her experience of slavery and its aftermath.

Thousands of former enslaved people like Joyner were still alive during the Great Depression. Lewis and Dunston belonged to the Negro Studies Project in Virginia, a rare, all-Black unit of a national effort to preserve Black history within the FWP led by Howard University’s Sterling A. Brown. It was a government initiative to seize that moment before a generation passed and document slavery in the words of those who’d lived through it. Altogether, the effort logged more than 2,000 interviews with formerly enslaved Americans.

Slavery, by the 1930s, was the last thing most Americans, Black or white, wanted to hear about. White Southerners didn’t care for reminders of their role in the peculiar institution, and many younger Black Americans found such reminders humiliating. Whenever Joyner told her children about her past, in fact, they got upset. So, she was understandably reluctant to share her tale with strangers.

Joyner showed the visitors her garden, where she grew roses and petunias, yet continued to deflect their questions. Soon, Lewis went off on an errand, leaving Dunston to try a one-on-one chat. Eventually, the younger woman persuaded Joyner to open up a bit.

“I don’t like to talk about it to folks,” Joyner admitted, “but don’t mind telling it for the work you are doing.”

In a way, this feels like two books. One is the compelling story of Joyner’s life, reconstructed through her words and the author’s painstaking research. We sense Joyner’s courage, her striking capabilities, her victories, her loves, and her losses. The second book is the generational story of “the long emancipation” of the subtitle, a term used by historian Ira Berlin to represent how becoming free was more protracted than any proclamation might suggest.

Emberton illustrates this with words from other freedpeople in “the charter generation” and interprets their experiences for our time. We see the extreme social upheaval after the Civil War; the innovations in institutions like marriage that freedpeople made in order to have autonomous lives; and the “first Great Migration” after Reconstruction, when African Americans traveled within the South to seek opportunity a generation before another wave moved north.

“These journeys were not defined by protest or the kinds of militant resistance that historians are trained to analyze,” writes Emberton, who aims to present the kind of in-depth biographical treatment of an everywoman’s life that earlier historians would’ve never considered. Yes, there are gaps in what any interviewer could get from a one-time conversation with a senior citizen about her earliest, most painful memories, but the author fills them as she can.

The book’s subtitle evokes Ernest J. Gaines’ The Autobiography of Miss Jane Pittman, which traced Black history through one fictionalized woman’s life from the Civil War to the Civil Rights era. (Gaines said he read “quite a few” WPA interviews with formerly enslaved people to give his novel authenticity.)

Still, To Walk About in Freedom does not include as much Priscilla as a reader might want. For long stretches, we leave her behind and explore the charter generation through what can feel like a history textbook. This is due in part to the material and to Emberton’s ambitions. Yet in giving a novel-esque structure to her narrative, she does right by the association with Gaines’ book.

Brown and Lewis each planned to publish a book that captured the richness of the formerly enslaved peoples’ interviews in one powerful story, Brown hoping “that American democracy might…be regenerated through the life stories of freedom’s charter generation.” Neither accomplished that in his lifetime. Carole Emberton has taken a different tack with Joyner’s story, seeking to “convey the texture of individual experience and the power of a single life to amplify the contours of history.” Her effort is well worth reading and reveals the extent to which such a feat is possible.

David A. Taylor’s books include Soul of a People, about the WPA writers, and Cork Wars: Intrigue and Industry in World War II, which received an Independent Publishers Book Award for world history. He teaches in the Johns Hopkins Science Writing Program.